Kumo: Sushi With a Side of Spectacle 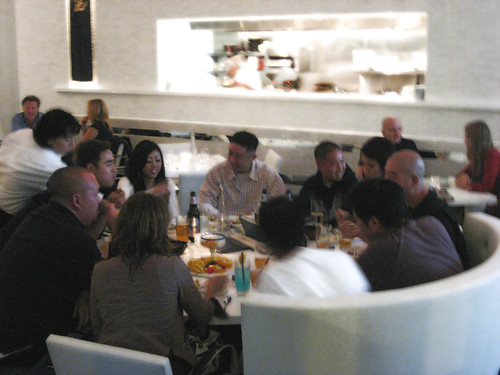 When I first heard about Kumo, ex-super agent Michael Ovitz’s new restaurant, I instantly shuttled it off my radar. It’s industry, it’s expensive, it’s so not for me.

But then when Steve, my fave bartender who used to work at Ford’s Filling Station, popped up behind the Japanese restaurant’s bar I dragged myself over there. Dre had gone the night before and soothed my fears about being underdressed for the three-week-old restaurant by saying I could actually get away with wearing my work clothes for a visit.

Michael Ovitz’s all-white, puffily-furnished Japanese restaurant will draw mobs of scenesters and agents — assuming the Gay Mafia he claimed muscled him out of Hollywood have no idea how to find…West Hollywood.

We found street parking fairly easily for a Thursday night, always a plus. But walking up to the restaurant situated on Melrose (the designer furniture store section), I couldn’t help but think that it looked like a strip mall circa 1994. “It’s really nice inside,” Dre said.

Once inside, we grabbed a couple of white seats at the empty white bar. Immediately I asked for the cocktail list. While Steve fixed Dre up one of his off-the-list cocktails, I requested a Pirates of the Orient from the other bartender, umm…. Damn, I forgot his name! 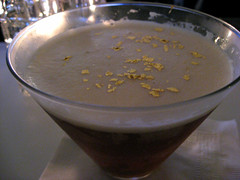 Anyway, the cocktail ($14) is made of Captain Morgan rum, green tea liqueur, cranberry and pomegranate juices mixed with acacia honey and sprinkled with gold flakes. Why gold? Dunno. Maybe it’s in reference to pirate booty. All I know is that it was the most unusual garnish I’ve seen. Pretty! And doesn’t taste of anything.

The cocktail was light and not too sweet. “The green tea liqueur balances the sweetness of the rum,” the bartender said. And he was right, that earthy taste I had previously experienced with green tea liqueur wasn’t there. I liked that. Unfortunately it went down too easily and it was gone before I knew it.

I scanned the cocktail menu but I didn’t really find anything enticing enough to spend $14+ on. And the drinks I was intrigued by were $18. Of course! Blah!

Some of the unusual cocktails on the menu:

Instead I ordered up some spicy tuna tacos. At $14, I don’t know what I was 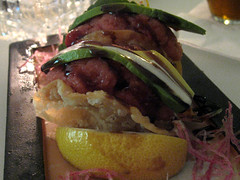 thinking, except that I was really hungry. I was concerned that two small “tacos” wouldn’t be enough but the bartender said that it came with a lot of fish so it’s very filling. But when I got them, they didn’t look filling at all, more like a light appetizer.

Several slices of spicy tuna and avocado sandwiched between two pieces of tempura chips drizzled with teriyaki sauce (?). I wasn’t sure how to eat them since they weren’t held together by a taco shell and I was given some chopsticks with a cute little chopstick rest. But if I was going to eat these, I could only do it the conventional taco-eating way, using my hands to push it into my wide-open mouth. Steve fake-gasped at my savagery and I shrugged.

It was sooo fresh and yummy. I just wish there were four small “tacos” instead of just the two. 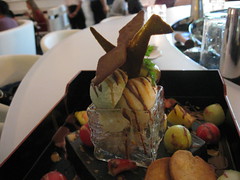 For dessert I ordered up the homemade mochi ice cream extravaganza ($12). I call it that because it was presented in a tray with melon balls scattered around the centerpiece which was a square glass textured to look like ice.

In it were two coffee, two vanilla and two green tea mochis topped by a chocolate cookie swan. And then the whole display was drizzled with chocolate syrup. So odd.

I started off on the melon balls first and then went in for the mochi after carefully removing the bird. The mochi cakes were big, at least bigger than the ones you get at Trader Joe’s. And they were so tender and fresh. Man, that’s good stuff. The mochi is actually available in several different flavors and you can choose three for this dessert.

You probably could technically share this dessert with a friend but I ate it all by myself. However after devouring the fourth one, I was ready to share but fortunately Dre doesn’t do sugar. OK, ALL mine! 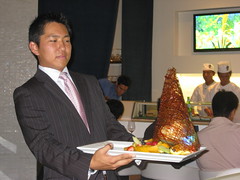 When all the plates were cleared I looked around the dining room. A big group of friends was celebrating a birthday with lots of drinks (read: several rounds of Adios Motherfucker, I kid you not) followed by an extravagant volcano confection of some sort.

The server brought the tall cake to the table, looking very much like a juggler balancing a plate on a stick. Then the friends sang “Happy Birthday,” the birthday boy blew out the candle and then the server took the dessert sculpture in the back to cut it up for distribution.

In the very back of the restaurant was a private room that was separated by the main dining room with some white drapery, but we could still see that Ovitz was back there. At least that’s what Steve said; I don’t know what the man looks like.

I asked Steve if any celebrities have come here yet and he said no. Not too odd considering this place has to shut down at 11pm (12am on weekends) due to city ordinances. And they have to be pretty strict about their 10:30 last call. 10:30 no alcohol whatsoever on the tables.

Kumo seems to be more of an after-work or jump-off place than an end destination anyway. And what with the opening of Katsuya Hollywood, those pesky celebs have somewhere else to get their designer sushi. As for me, I won’t come for the food but I’d come by to visit Steve…after I save up for that Shibuya cocktail.