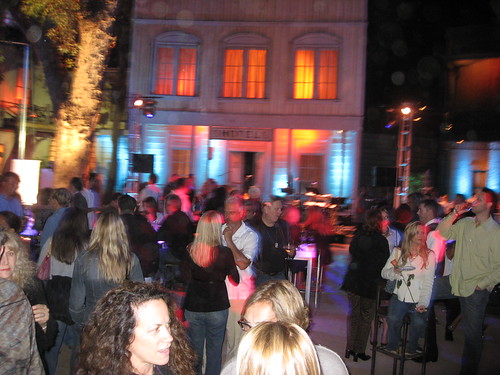 OMG, had so much fun last night. Would have been even better if I had a designated driver but as it was I just didn’t drink all that much. Le sigh! I so wanted to try the Patron tequila bar, the Belvedere vodka bar, the Moet & Chandon champagne bar and all the various wineries that were present at the 25th Annual Wine & Food Festival. But I guess it was a good thing I didn’t since I had a hard enough time trying to negotiate the cobblestone streets in the Universal Studios back lot with heels. I nearly took out some innocent bystanders trying to walk up the hill.

How did I get in this sold-out $300 ticket event which featured the talents of celebrity chefs like Wolfgang Puck, Nancy Silverton and Paul Prudhomme to name a few? Pure and simple luck. Richard Coraine, COO of Union Square Hospitality Group, had invited me to Wolfgang Puck’s charity event way back when I had written about the Big Apple Barbecue Block Party his company just so happens to put together. He liked my blog.

Richard was also good enough to get me into the Red Hot @ Red Seven pre-festival event on Friday night. That party featured the beef stylings from some of the hottest steakhouses in L.A. as well as Vegas and NYC. Dotsara and I had a grand ol’ time partaking of the Patron martinis and mini Moet & Chandon champagne bottles.

Our favorite meat dishes were the succulent Kobe beef from Katana and the mouth-watering monster mini burgers (and yummy chocolate shakes) from NYC’s Shake Shack. Both of which we lined up for twice. Lawry’s and SW Steakhouse were there, too, but were unimpressive. In any case, Dotsara took some great pictures of the event.

Where I was a reveler at Red Hot, Richard actually put me to work at the AWFF. But I didn’t mind. I was actually entertaining the idea of trying to find a part-time job at a bar or restaurant and this way I would get a teeny-tiny taste of what it’s like. But I helped out at the Union Square Cafe table just making sure Chef Michael Romano (who was respectfully referred to as “Chef” or “Aay, Romano!”) got more plates, that the garbage can was emptied, that the forks were consolidated, that the flame for the burner wasn’t out and that the assistant chef got her bags of pasta. It was so cool.

Later Richard took me around the festival introducing me to his friends, aka other chefs and dining world big shots. “Is there anyone you want to meet?” he asked me. “Umm, Nancy Silverton,” I replied after scouring my brain for a name. I felt bad that I wasn’t foodie enough to know the names of the big-time chefs in the culinary world but living in L.A. who hasn’t heard of Nancy Silverton of Mozza fame? 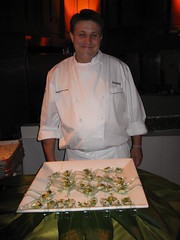 Richard seemed to know everyone and what would have been an absolute dream come true for a hard-core foodie was merely fascinating to me.

We couldn’t locate Nancy, who used to work with Richard back during their Wolfgang Puck years, but did meet Eric Klein of Spago’s Las Vegas. We also went in search of Floyd Cardoz of Tabla whom Richard introduced me to the night before at Red Seven but that guy was nowhere to be found.

It was funny having Richard introduce me as “Caroline on Crack.” One lady asked me if my blog was indeed about crack. She didn’t seem like she would have been shocked if it was. When I was introduced to chefs as a blogger, I braced myself for an upturned nose or a rude remark after having read (via Eater L.A.) about the general dislike chefs have for bloggers but instead everyone I met was congenial.

Richard also gave me the skinny on almost everyone: One elegant couple he pointed out saying they were big shot diners in the restaurant world. Their word is gold even though they aren’t critics.

One woman with scarlet-red hair at one of the reserved tables near the main stage called Richard over. They spoke for a bit and then he came back over to me gesturing to her and her table of friends. “There’s a lot of money at that table.” Apparently the red-haired woman runs a similar food event back in Cleveland, but it’s bigger and more of a spectacle.

He also told me the sad story behind Bonaccorsi Wine Company after we sampled their red, poured by Jenne Lee Bonaccorsi. 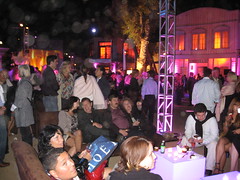 One chef, I forgot his name, I was also introduced to, couldn’t stop talking about all the different places he traveled to and was going to travel to. He told us about horsebacking in Mongolia, checking out the largest pachinko palace in Tokyo and barhopping with $4,000 tabs at every bar. “Have you been to Tokyo?” he asked me. “Umm, several years ago….”

I felt like an astronaut exploring an alien culture. $300 tickets? $25,000 reserved tables? Restaurant openings around the world? $4,000 bar tabs? My head will explode if I even think about paying for an $18 cocktail! Of course most of the crowd consisted of older folks in their late 40s and up who can afford such things.

I saw one “celeb.” Brent Spiner (aka Data from STNG) and his wife stopped by the Union Square Cafe table saying that they didn’t realize that their favorite restaurant was at the event. I tried not to stare. That’s Data sampling the pasta with mushroom sauce and pecorino and parmesan cheese!

This food fest was a spectacle with four live music stages, 64 vintners, seven spirits, and 38 restaurants. I was overwhelmed. Unfortunately since I spent most of my time helping out at Union Square Cafe and then walking around with Richard, I didn’t really try any of the food. I only got a bit of Union Square Cafe’s yummy pasta (which actually some Angelenos shied away from because, I assume, they were on a no-carb diet) and “a gourmet potato chip” from Patina. Also, the lines of eager eaters everywhere else were kind of daunting. 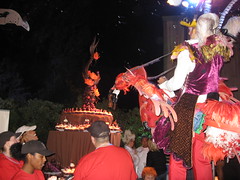 But then when it came to the pastry tables in the Moet & Chandon Lounge, no one could get in my way, not even the flamingo circus person on stilts. I tried a chocolate chip cupcake with chocolate frosting from Spago’s. Meh. They were all out of the red velvet, unfortunately.

Then I made my way to the Citizen Cake table. I love their cupcakes! Unfortunately, they didn’t have any. Instead they had something with parmesan cheese and Pop Rocks. Intrigued, I scooped some into my mouth with the mini glowstick that had come with my cupcake. Blech! The dessert actually tasted like meat. Oh well, “A” for effort for bringing something really different.

At about 9:30 it seemed like the event was starting to close down even though the end time was publicized to be 11pm. Some vendors ran out of food/wine while guests wanted to beat the traffic. Lame. The band on the main stage was still going strong but no one was dancing even though they were doing an awesome job performing covers of “Crazy,” “Crazy in Love,” and some Bon Jovi song. 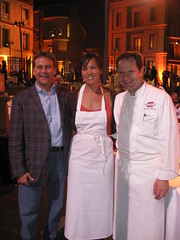 I kinda wished that I had a big group of friends come with me to this thing. It would have been more fun running around sampling all the restaurants, lounging in the Patron ice bar, tearing up the Moet & Chandon dessert tables and dancing in front of the different stages. As it was, I envied the groups of friends laughing and talking loudly on the tram ride back to the parking structure.

Oh well, I got to work with a big-time chef and meet some cool people, and I had an orchid presented to me by Chef Romano and a kitchen apron to show for it.