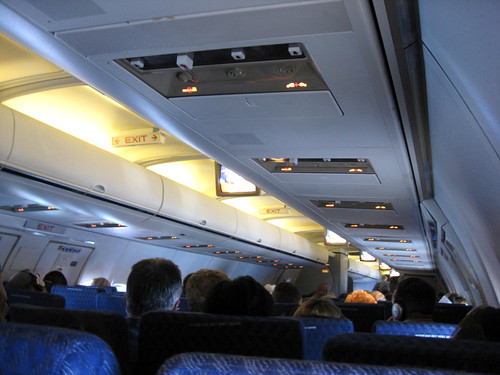 How is it that with all the advancements in technology to make our lives as comfortable as possible, they still haven’t applied that science to airplanes? In fact it seems like airplanes are increasingly becoming the most uncomfortable way to travel out of the planes-trains-automobiles transportation triad. Case in point: my trip to Maui via American Airlines.

I know it is a characteristic of coach class for its passengers to be crammed in like cattle but why can’t that be changed? Why must the thrifty be punished so? We’re just trying to save some money by not paying $300 more to fly business class, can’t we at least get enough space to stretch out our legs and recline our seats 5 degrees more, too?

True, this whole sardine can characteristic isn’t unique to just American Airlines and perhaps the ugly ’70s printed seat upholstery that didn’t quite fit the seats isn’t either nor the unattractive flight attendants. But what I especially didn’t like was that you have to pay for airplane food now.

I know, a lot of airlines like Northwest and United are charging for their lame food but that didn’t happen in Continental when I went to New York this summer. And the flight was actually a bit more bearable because of it. Like you’re a rabbit in a cage who’s at least enjoying a nice wedge of lettuce. Flying is an ordeal as it is without our being charged for things that used to be free. (Remember when they didn’t charge you $2 for those headphones so you can hear the in-flight movie? Ah, the good ol’ days.)

But this time the cost to eat in-flight was $5 for a Thai chicken wrap, $2 for a Musketeer bar and even $2 for bottled water. Oh yeah, and no more free peanuts! Boo! It was a good thing that I bought a bottled water from the airport store beforehand and had a couple of energy bars in my carry-on as well.

I also didn’t like the fact that the TV screens ran down the center of the aisle so those seated by the windows had their view partially obstructed by the overhead bins. In other airlines, they have them running down each side of the plane. What happened to that here?

When we finally landed in Maui, my seatmates were grumpy, too. Yes, we just arrived in what would be the start of a beautiful vacation, but the journey getting there sucked. “I’m never flying this airlines again,” the young mother of two who sat in front of me said. The flight attendants had been rude to her when she had made the mistake of putting her child seats in the aisle seats instead of by the windows as is apparently FAA regulation.

Yeah, American Airlines sucked, at least the main cabin experience did. I guess business class couldn’t have been too bad since apparently Nicole Richie and Joel Madden were on the same flight.

Regarding my Alamo Rent-a-Car experience in Maui, I don’t have to go into too much detail except to say there were roaches in my car. Dre said that it’s a common occurrence in the Jeep and convertible rentals on the islands but she’s never seen it happen in a regular car before. Her theory is that they’re attracted to the moisture in cars.

In any case, when we were setting out to hit a tiki lounge for a first-night-in-Maui mai tai, we opened the car door to find roaches crawling all over the dash. OK, there were probably only about three scurrying around, but isn’t that three too many? So we opted to walk the 1.7 miles to get to the bar instead.

The next day I called Alamo.

“Hi, I wasn’t sure if this was normal but my rental car has roaches in it.”

“Oh yeah? Yeah, it’s not a common occurrence but it does happen sometimes. Feel free to turn your car in and exchange it for another one.”

So, that I did. I had to drive all the way back to the airport location and endure several long lines (it was a Friday morning so there were many other tourists picking up their cars, too) to get another car. Since all the cars were taken, all the customers basically had to wait til the recently returned cars were washed and barely dried before they could receive them.

I waited and waited until one of the Alamo lot people pointed me to a compact car that just got out of the wash. “Heyyy, that looks like the car I just turned in.” I checked under the floor mat on the driver side. Sure enough, there was that roach carcass that I had pushed under the rug the night before. Ugh!

I let the German couple behind me in line take the car since they couldn’t understand me when I said it was infested by roaches. Hopefully they don’t mind such things.

Fortunately the car I did end up taking had no roach problems.

Now, I know roach-infested rentals could simply be a common occurrence in Hawaii but what I didn’t like about Alamo is that they didn’t clean their cars all that well, or dry ’em for that matter. And the fact that that roach carcass was still there instead of being vacuumed up disturbed me. In fact the interior of the car was barely clean what with mud smudges on the doors and sandy floor mats and crumbs in the seats. And this was a car that was sitting in the lot when we had first arrived in town at 8pm.

I would think a large rental car agency like Alamo would have higher standards of cleanliness but I guess not.