The Starling Diner: Won't You Be My Neighbor? 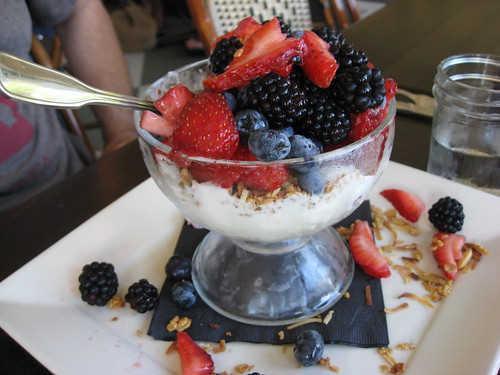 Breakfast is my favorite meal of the day, that and the 3pm sugar jones, so I was more than delighted when I visited the Starling Diner (formerly the 3rd Street Cafe) in the LBC. I’ve done the Coffee Cup Cafe (which I love despite that dreaded cash-only rule), Magnolia Cafe (seniors central) and Eggs, etc. (good ol’ standby) and was looking for something a bit more je ne sais quoi but not too much more in the ol’ pocketbook. 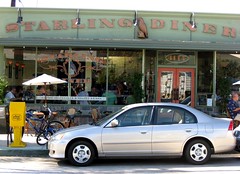 The Starling Diner, which apparently opened about five months ago (overheard the chef telling neighboring diners this), offers a quaint setting in the midst of this quiet Belmont Shore hood where friends, family and neighbors can meet up to have breakfast, lunch and dinner. All the wooden tables and chairs are spaced close together to encourage folks to get to know their neighbors. And apparently the long eight-person table near the entrance acts as counter service for single diners (dining alone, not looking for dates), where they can sit and eat with other single diners.

There were only beautiful craftsman houses around the diner; no other restaurants or stores or even a Starbucks (shock!) to warrant more foot traffic than the occasional neighbor walking their dog or riding their bike. And at a little before 9am on a Sunday, there weren’t many other diners here besides the few retirees enjoying their early morning breakfast.

We walked in to find a dining area way more charming than those above breakfast joints I mentioned. Details from little wooden bird statues to signs on the wall encouraging you to “Be Nice” and “Eat” to Billie Holiday on the sound system left us with a general feeling of well-being.

I found myself cooing at all the cute details. The delicate white porcelain moo cow creamer. Cooking magazines, like Saveur and Bon Appetit, with plastic covers available at the front for diners to peruse. The glass mason jars used to serve the spa water laced with cucumbers. Even the sugar packet sticks. It was all so darling.

Even the menu had me oohing. Custom-made sodas? Fresh-squeezed OJ? Baked-every-morning basket of scones? I was going to explode. But I held off on that til I tasted the food. 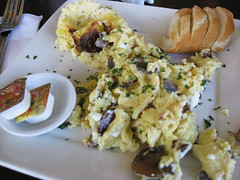 Although I was tempted by the smoked salmon and caramelized onion scramble, I went for the goat cheese and mushrooms one ($9.50). It comes with a side of polenta potatoes but I could have substituted that for a side of fruit for $1.50 more. I stuck to the staple, however, since it was such a departure from the usual house potatoes of other breakfast places.

Instead of the OJ, although I had wanted to see them squeeze it fresh, I ordered a cup of Joe — for me the true test of a good breakfast joint. To my delight it was strong, dark and smooth. Not bitter or burnt or weak. I didn’t even have to put creamer or sugar in it as it tasted fine just black.

My scramble was as good as I anticipated. There was just the right amount of goat cheese and mushrooms to provide a savory meal without being too chunky or overly creamy. I still salivate just thinking about it. A side of sliced-up baguette accompanied the eggs as well as the polenta, which arrived like a scoop of yellowed mashed potatoes. Although I found this more appetizing than regular country potatoes, I didn’t finish it. It really didn’t do anything for my tastebuds. Plus I wanted to save room in my stomach for my scramble.

One of the guys at the table next to ours eyed my dish and ordered one up for himself. And we salivated over the baked granola, berries and yogurt the waitress placed in front of his friend. Before he could dig into it, I asked if I could take a picture of it because it was so yummy-looking. “It’s especially great when the blackberries are in season, which they are.” “I’m going to get that next time,” my bf said. Me, too! 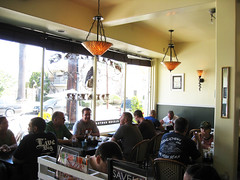 I overheard my neighbor ask the waitress for the coffee special that they make with the nice design on it. “Oh, you mean the latte? Usually the coffee barista makes that special fern design. I don’t know how to make that,” she replied sweet as pie. “It’s just a latte. It’ll taste the same but just not have that design on it,” his friend clarified. Heh.

On the other side of them, I watched an elderly woman take out money from a plain white envelope instead of a wallet to pay her bill. Her gentleman friend plopped coins into the little metal bucket that their bill arrived in.

Nearing 10am, the restaurant started to fill up with more people. I couldn’t help but notice that we were the youngest folks here…and we’re not all that young. But maybe the 20-somethings roll in around noon cuz they’re late risers like that.

I’ll be interested to see what dinner here will be like. There’s a wine list and a half-off Belgian beer special on Tuesdays and Wednesdays. Nice! I think I’ve found my new favorite “hidden” b-l-d spot in the LBC.