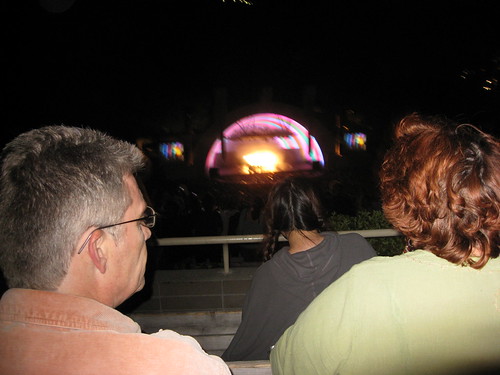 Man, I’m exhausted. My eyes are red, my head heavy and my feet aching. Lots of dancing at the Bowl tonight what with Paul Oakenfold opening and Underworld performing. Shelley and I packed up a couple of bottles of wine and food we picked up from TJ’s and headed for the Bowl.

I wanted to get there before 7 so that we wouldn’t miss Oakenfold. We didn’t. He opened while late comers continued to stream through the entrances. Why do people arrive late to Bowl shows and then leave early during the applause? They’re missing so much that way. 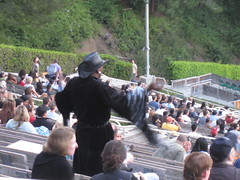 Oakenfold got everyone up on their feet. Concert goers swayed around at first to the music and then were whipped up into a frenzy when the beats sped up. In the nosebleed seats, the 40-something folks in front of us Woo-Hoo’d and danced after taking several hits from a pipe. A couple of women danced with their arms flaying around as they made their way to the bathroom, reminding me of hippie chicks minus daisies in their hair. In the section across the way a black man with a red mohawk and long flowy sleeves boogeyed much to the chagrin of those sitting behind him.

Carmen Rizzo, a violinist and a bongo player accompanied Oakenfold. It sounded, uh, awesome. Sorry, I’m not a music reviewer. Then Oakenfold did a remix of “Adagio for Strings” for his finale. Yes, I raved to classical music. But apparently this is a popular song to redo a la electronica as it has also been messed with by William Orbit and DJ Tiesto before.

Unfortunately, Underworld headlined. They just weren’t as fun as Oakenfold. They started kinda slow. We stood and tried to find the beat to dance to but ended up shrugging. Toward the end of the show beats started to pick up. The only song I recognized was “Born Slippy,” which sounded awesome. The heavy 40-something woman in front of me went crazy, whooping and bending over like she was worshiping at the altar that dance built. I love her. 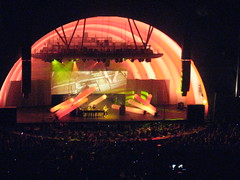 That was the great thing about this show. It surprisingly had a diverse range of fans, from hipsters to yuppies and 20-somethings to baby-boomers. So odd. Even host Jason Bentley had to note, “I know there are old school ravers out there… I see those glow sticks.” And it was true. There were a lot of older people around us. I mean, even older than me! But everyone was having a grand ol’ time.

I even ran into Steph, queen bee of Yelp, in the X section. I shared a bit of my Syrah with her while she borrowed my digicam to try and capture the dance moves of a nearby 40-something raver high on “concert air,” as Steph would say. The folks in front of us shared their premixed margarita with Shelley while I closed my eyes and just got my groove on.

Underworld ended their set and when the house lights were still down I was kinda hoping they would do a finale with Oakenfold. But they didn’t. They just performed another eh song. Very anticlimactic. But I’m sure if I were a big Underworld fan I would have been…OK with it.

You gotta love the Bowl shows, though. Awesome for people watching and getting to meet other Angelenos. Such a sense of camaraderie there because we’re all feeling good and just enjoying the summer weather, music, food and drink. Sigh, I’m sure going to miss Bowl season.