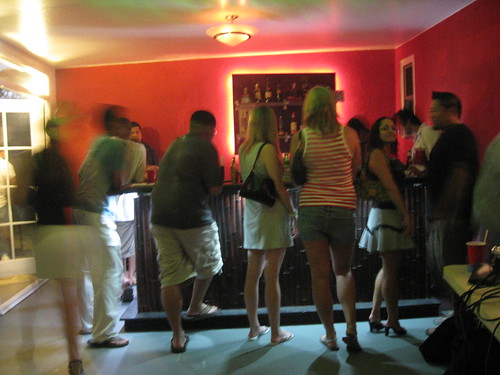 A hot, new bar opened up on Sunday in West L.A.: my friend Hawaiian Ryan‘s tiki bar. Crimson walls, faux bamboo bar, a dj, and it’s fully stocked and complete with bartenders who pour with a heavy hand. Keep your drink order simple though because I think they’re just friends who volunteered to help out.

Outside the side doors is a barbecue grill cooking up some steaks and chicken breasts. Behind the dj’s bobbing head is the kitchen window where you can see inside a table covered with a delectable spread of bacon-wrapped shrimp, seafood pasta, sushi, and even mochi pastries. The crowd is mostly young, beautiful and surprisingly unpretentious but that’s just in keeping with the spirit of aloha.

“It’s not done yet,” Ryan says of his new bar, after I complain that there isn’t anywhere for people to sit. “I’m going to put a stripper pole in that corner and a bunch of couches for lounging there.” He points to where the dj setup is currently located. “The pole will be for guys and girls. For whoever wants to dance.”

“And you need a spotlight or something on that display of bottles behind the bar,” I add. “I’m going to put in LED lights in the shelves so it’ll light up the bottles,” he replies. Yeah, the bar isn’t complete yet but Ryan just wanted to celebrate its near completion during the holiday weekend.

Well, at least the food and drinks are free. (But Ryan will accept monetary or liquid donations to his bar.) Yup, they’re free because this isn’t the sort of bar that’s open to the public. You have to be a friend of Ryan’s or at least a friend of one of his close friends, of which he has many, to gain access. 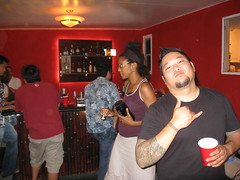 Ya see, the bar is located in the extension built onto the back of his house, making it the ultimate bachelor pad. “I’m going to try and get Maxim to do a piece on me,” he says, throwing his head back in that big pimpin’ way that he does. “You should write about it, too,” he adds. “Why? The general public can’t get in here.” “Yeah? So?”

He has a point though. It IS an interesting addition to the L.A. nightlife scene. At least to those who can get in. Ryan just lives down the street from Saints & Sinners so his place always served as the spot to hit after hours but now the drinking can officially continue in a stylish, grander capacity.

“What about your neighbors?” I ask, pointing to the houses on the other side of the fences. Ryan shrugs. The music is booming but it’s still only 8 o’clock so maybe it’s not going to be an issue. Plus, I think Ryan might have the LAPD on his side as I saw a couple of boys in blue walk from the bar and into the house where the food was. “Dude, you should have told me they were your friends. I have a couple of tickets I need to get out of,” one partyer standing by the backyard door said to Ryan.

All Hawaiian Ryan needs now is an A/C for hot summer nights, a fire pit for cold ones, more outdoor seating and a screen door so he can keep his kitchen door open and the flies out. If you want in, maybe kiss up to him on MySpace or go up to him on one of the many nights he’s at S&S. But no fake Hollywood types need apply. He hates that.