The Really Gay Brady Brunch at The Boulevard 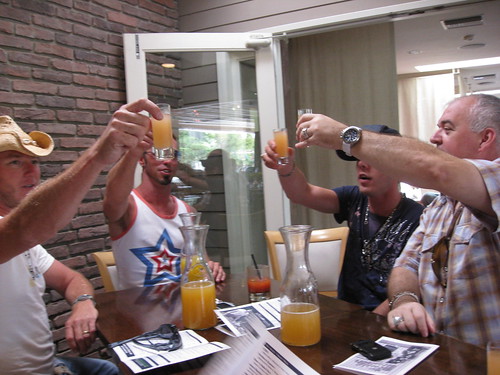 With nowhere to go on an early Saturday afternoon after Micky’s burned down last Tuesday, my bro Gerard, my bro-in-gay Chris and their roommate Mutha happily agreed to meet me and Nancy at The Boulevard for its Brady Brunch.

Nancy had told me about it before, saying it was fabulous, gay fabulous. The draw here isn’t food and/or drink specials (since there aren’t any) but rather fun and games. The brunch menu (dishes range from $9 to $16) — with stuff like Fonzie’s French Toast, 4:20 and Peter’s Pulled Pork — sounded like fun but the premise of music and TV shows from the ’50s through the ’70s sounded like something for the “older” crowd.

We take television and radio segments from the ’50s, ’60s, ’70s and ’80s and program them for you in a homage to broadcast history. It’s all there! From Walter Cronkite to The Jeffersons.

But when our small group of five showed up, there were a lot of youngish, pretty people there. I even saw that chick from That ’70s Show scurrying around with her friends. When we checked in with the host, our crew quickly grew from five to 15 with friends telling friends to join them at the brunch. Several bartenders from Micky’s showed up as well, earning us a table toute de suite instead of the initial 5- to 10-minute wait the host told us it would take.

We took up a bunch of tables pushed together in the back corner of the patio. All the boys bought a carafe each of mimosas from the bar and drank from them like they were sipping from cocktail glasses. The host set a blue toy bucket filled with yellow Play-Doh, a blueberry Pop Tart, a couple of male underwear catalogs and some candy in the middle of our table. 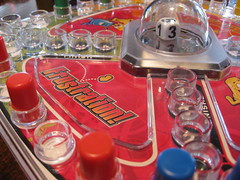 Four of us grabbed the Frustration board game and played it to kill time til someone came by to take our order. Since some chairs at our table were empty awaiting the arrival of more friends, none of the staff came by to tend to our needs. Perhaps they thought we’d want to wait til our entire party got there. So we waited some more.

The TV screens showing clips from I Love Lucy and The Golden Girls, among other things, were able to distract us a bit from our hunger. During the “commercial breaks,” a dj spun tunes from the ’50s through the ’80s, even taking requests. Somebody asked for “It’s Raining Men.” “Ugh, this is such the gay anthem,” my brother said annoyed. He hates gay stereotypes. “No, I think someone requested it because it’s raining,” Nancy said.

Finally the host came by and took our orders. Nancy suggested that she and I split the Aston Martin’s Twin-Turbo French “monster-sized” mini burgers which came with tater-tots ($13). One of three different styles, the French version has caramelized onions, bleu cheese, mayo, Dijon mustard and champagne vinegar greens. Mmm, sounded savory! She also recommended we try the banana split ($8). “They make the chocolate syrup themselves.” 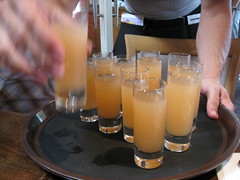 While we waited for our food to arrive, somebody ordered a round of Micky’s Makeover Shots ($3 each), which benefits the “Micky’s Employees Fund.” Solemnly we raised our shot glasses to toast the fallen gay bar and then downed the liquid.

Suddenly everyone was gagging and shuddering. “That’s damn nasty!” Mutha cried. And it sure was, tasting like grapefruit juice and vodka. How did they think that concoction up and why for Micky’s? Oh well, it’s for a good cause anyway.

After a loonnng while, when our food still hadn’t arrived, everyone started getting antsy. “I think they’re waiting til all the dishes are ready to start bringing them out,” Nancy said. Hm. We waited some more watching an episode of The Golden Girls.

In my hunger delirium I wondered why someone hadn’t thought to make TGG for the stage, like The Real Live Brady Bunch but with drag queens. I can totally see it now: Dorothy, Blanche, Rose and Sophia played by men. Their characters alone read like homosexual archetypes. 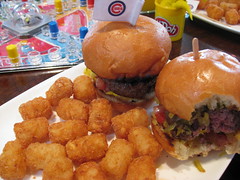 Finally the food showed up. But the odd thing was, everyone got their order except me and Nancy. Nancy asked the waiter about our order. “They’re bringing everything out now,” he said. But when we saw that even the late-comers got their dishes, too, we asked again. The waiter checked his receipts. “I don’t have your order down at all,” he said.

Turned out that since we had asked for a separate bill and the host had taken our order instead of the waiter, our check got lost in the shuffle and was never placed. Aaarrrrgghh! At this point I was famished but still managed to remain composed.

The host and the waiter were very nice and apologetic saying they’d bring out our burgers as soon as possible. And they did but it was too late, the damage was already done. I glanced at the clock. I had to wait for two hours to get my food, from the time I walked in the door to when I placed my order to when I actually had the plate set in front of me. That’s a record. “I’m never coming back here again,” Chris said matter-of-factly. “There’s no excuse for what they did,” Gerard said loudly.

The brunch what with the favorite TV shows, the dj and the board games is a fun idea. Who wouldn’t want to spend an easy Saturday morning doing that? But after that experience, especially when there aren’t any drink specials, the boys crossed this off their list.

My burger was pretty good, loved the tater tots, and the banana split was OK. I wasn’t crazy about the food prices and the lack of drink specials got to me, too. But I can see the merit in what they’re trying to do here. Perhaps a much smaller group who’s more interested in fun than food might have a better experience.

More pictures from the Brady Brunch.

Every Saturday from 11am to 4pm