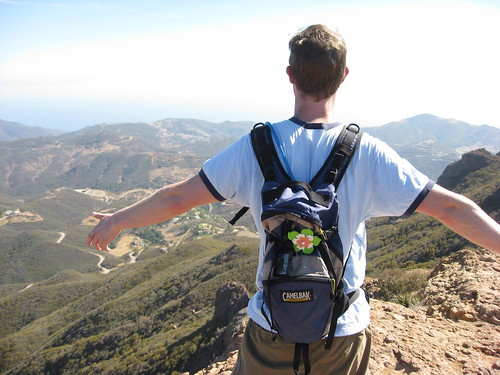 If you ever want to feel like you’re sitting on top of the world, tackle Sandstone Peak in the Santa Monica Mountains, aka “one of the best hikes in SoCal.” At an elevation of 3,111 feet, it’s the highest peak in town. The views are awe-inspiring, where you’re far away enough from the city to escape some of that brown smog and you’re surrounded by “wilderness.” You can spot the Pacific Ocean far off in the distance, blending in with the blue of the sky.

Online hiking sites suggest doing the Mishe Mokwa Trail to Sandstone Peak first but many hikers say you should do the loop clockwise, tackling the peak first to get the hard part out of the way while you still have some fight in ya. Because, with a 1,400-foot elevation gain, you might be too tired at the end of the 6-mile loop.

We hit the trail at around 2pm in what felt like the hottest part of the day. The air was so dry my nostrils burned, the hot sun was relentless. I was afraid that the 1.5 liters I had in my hydration pack might not be enough. But we ran into some hikers who were coming back from the trail and they said that 1.5 would be enough. They ended up being right, thank goodness.

When you leave the parking lot of the Sandstone Peak trailhead, you go up a little bit til you hit the fork that tells you Sandstone left and Mishe Mokwa right. Go left. After that, it’s nothing but uphill, seemingly never-ending. I found myself stopping often to catch my breath. The hot sun didn’t help matters so I took advantage of the occasional shade to make the most of my rest stops.

The plants you see here, such as coastal sage scrub and mixed chaparral, are adapted to hot, dry summers and mild, wet winters. Keep an eye out for red shank chaparral, a tree-like shrub with reddish-brown bark, clusters of thread-like leaves, and small bunches of white flowers in July and August.

Occasionally a cool invigorating breeze would waft in from the canyons but would then get interrupted by the very hot air rising from the ground. So I’d go from “Aah” to “Friggin fraggin!!” in the span of a couple of seconds. There weren’t many trees to offer shade but a lot of bushes and the occasional views of the Conejo and San Fernando Valleys. Gorgeous. I think after an hour or so we finally made it to the top of Sandstone Peak. 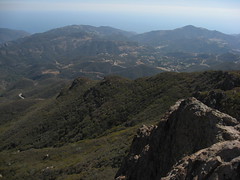 There was only one other person up there even though we had encountered many people on the trail earlier. They must have gotten an earlier start and known that to be out this late, as we were, was insane. We scrambled up the rocky hill to get to the W. Herbert Allen monument which marked the highest point of the peak.

Inside the monument was a register — a composition notebook where everyone who reached the top scribbled down their thoughts about what it felt like being at the top. I just wrote my complaints about how hot it was but how seeing the gorgeous view made the killer hike worth it. After resting for a bit and taking in the scenery, we made our way back down to Backbone Trail.

The rest of the hike was a cinch in comparison to that first arduous part. I didn’t need to rest as much and we managed to walk a faster pace.

We completed the hike in about 3 hours and 40 minutes. The average time for most hikers is 3 and half hours. When we got back to the parking lot, my legs tingled with pain but a good pain and I felt wonderfully exhausted.

I’d definitely do this hike again but maybe wait til four hours before sunset because hiking uphill a couple thousand feet on a hot summer afternoon is not fun. BTW, dogs are allowed on the trail. Just keep them on the leash (6 feet or shorter) and clean up after them.

More pictures from the hike.