Elevate Lounge: Nightclub With a View

The fire alarm blared, suddenly shutting off the music in Elevate Lounge and setting off seizure-inducing strobe lights. At first everyone in the bar cheered like high-schoolers during a fire drill; some shouted “Fire alarm drink specials!” But after 10 minutes or so of flashing lights (the alarm was shut off sooner thank gawd), we were over it.

Besides the big guys in black (security) looked unfazed and didn’t try to evacuate the building so Dre and I continued to lounge while attempting to enjoy our cocktails despite the splitting headaches caused by the blinking lights. “Someone pulled the alarm,” I heard Greg, the general manager, tell one of the cocktail waitresses. “Someone said it was the manager from the Standard.” They both giggled. 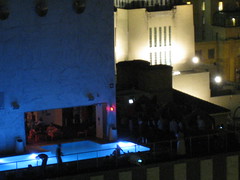 Later when Greg came over to join me and Dre, offering us a couple of cocktails on the house for having to endure the fire alarm incident, he told us that he can see the Standard Roof Bar and that they aren’t as busy as Elevate is, even though the grand opening was just last Friday.

This didn’t surprise me at all considering this penthouse bar doesn’t charge a cover (“Not yet,” Greg said ominously) and the view is better up here at the top of this 21-story building where you can see that Eastern clock, the tops of many downtown buildings and even a horizon. The Standard Roof can’t attest to the same. Also the crowd wasn’t intimidatingly Hollywood. In fact it was a very mixed crowd. “Not many cute boys though,” Dre complained.

People here varied from what looked like casual Westsiders to hip Eastsiders to sleek Hollywood types. But I was still glad that I dressed up somewhat. The girls here gave me a run for my money with their short designer dresses and high heels. While some guys wore suits and some wore black Gold’s Gym uniforms.

For drinks, I made the mistake of ordering from Elevate’s bar when we first arrived. I say “mistake” because the specialty cocktails are only done up across the hall in Takami and so I felt pressured to order up the Orange Blossom ($12) which is simply a premix of ginger and OJ with vodka. Not tasty at all! It took me 45 minutes to finish it. That’s a looong time in Caroline Land.

Dre ordered a dirty vodka martini ($14) being the dirty girl she is, but she hated her drink as well, nursing it for a record-setting (for Dre) two hours! “Vodka martinis aren’t supposed to have bubbles,” she said, showing me the bubbles floating with her speared olives. Weird. 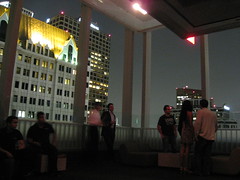 And it didn’t help that the drinks were served in plastic martini glasses which warmed up faster in our hands and really diminished the luxuriating experience of sipping a cocktail. But when I looked out at the wide-open balcony with sky floor to ceiling, I understood the necessity for plastic barware. Drunk people in high places can get rambunctious to the detriment of the people below.

But, if you order a specialty cocktail from Takami across the way where the scene is quieter, not clubby and the bar has actual bar stools, you can walk away with a cocktail in an actual glass. THAT’s more like it.

Why doesn’t Elevate serve the specialty cocktails, you ask? Because they’re too time-consuming to make, and the bars in the lounge are all about getting your drink asap and then lounging or dancing. I can appreciate that, but I still love the whole cocktail-making show so I sashayed over to the empty restaurant bar (the restaurant itself was buzzing with some diners) where two bartenders greeted me.

“I would like to order one of your specialty cocktails,” I said gleefully. “OK, but I have to warn you that we’re out of a lot of stuff. Like lychees, so we can’t make the drinks that are supposed to come with them…well, we can but they won’t be as good as they’re supposed to be.” “Why not?” “Because we muddle the fruit so it won’t be the same,” both bartenders said.

“Why are you out of a lot of stuff?’ I asked. “Because we had a soft opening last week and….” My attention trailed off. All I heard was that they were expecting more stuff soon. 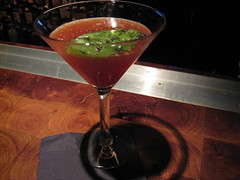 “I can make you the Takami Sunset. That’s popular,” he offered.

Takami Sunset: Grey Goose, Cointreau, Chambord, fresh strawberries and fresh basil ($14). “I don’t want that. It sounds too syrupy.” “No, it’s just a splash of Cointreau and a splash of Chambord. The rest is Grey Goose.” “OK!”

The bartender set about making the cocktail. And, yes, it did take some time and I couldn’t imagine him doing that in the dark, small bar across the hall. There was muddling and shaking and garnishing of things.

After he finished it off by laying a basil leaf on its surface, I seized hold of the cool glass and took a sip. Yummy! Strawberries! “I love it!” I exclaimed to him. “I’m glad you do because not many people do.” “Wha-what?! Why not?” “Because they think it tastes too medicinal,” he replied. “Well that’s just because they probably let the basil leaf sit too long before they drank it,” I guessed. “Exactly. It’s the kind of drink that you have to drink right away after it’s made,” he said.

He was right but even though it was a tasty little treat — strawberry sweet but not syrupy — I wanted to nurse it for the rest of the night so I took the basil leaf out.

Dre and I continued to sit in our spot facing the building with the gold roof, chair-dancing to the club mix versions of the Gorillaz’s “Dare” and Flock of Seagulls’ “I Ran” but not so much to Paris Hilton’s one song followed by Justin Timberlake’s “My Love.” Quite an eclectic mix of music. 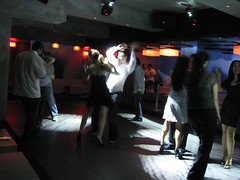 Early in the evening, the dance floor with its moving colored lights laid dormant but got pretty busy after 11. Men who weren’t afraid to flail their arms around to “SexyBack” took to the floor. Awesome. People stood around on the periphery watching the show and smirking. That’s when Dre and I decided that it was time to head over to Seven Grand for a quick night cap.

Anyhoo, Elevate would be a really cool place to hang out with a bunch of friends. It’s chill but not too chill and clubby but not too much. I just hope that they don’t start charging a cover anytime soon.

More pictures of the lounge.