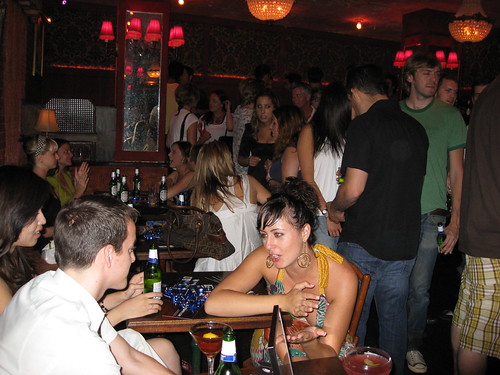 “I got a reply that they’re totally over capacity and they couldn’t take any more people,” one friend emailed me.

“I was str8 up denied!” Twittered another.

The confirmation email I received from the site warned: “Please note that the guest list does not guarantee admission.”

Uh oh, sounds like the launch party for Metromix‘s monthly event Urban Nites was going to be a zoo. So naturally I dragged Dre to the party venue, Bar Lubitsch, a half hour before start time at 9:30. “If there IS a line outside, we’re going to keep on driving,” Dre insisted. “That’s fine. Maybe we’ll go to Elevate Lounge instead,” I replied. I really didn’t feel like contending with a long line tonight.

But since we did get there early, there wasn’t a line. We just walked up to the doorguys and snagged a 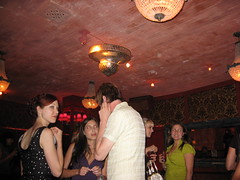 couple of bar stools and ordered up some cocktails while waiting for the party to start.

The event was taking place in the back bar, the gorgeous back bar which had even more tables, a stage and a second smaller bar.

While I sipped on my sugar-free Ninotchka I kept looking at the clock which seemed to move oh-so slowly. 9:08, 9:10, 9:21, 9:32. OK, time to party! We made our way toward the back where the doorguy who greeted us at the first entrance was now manning this doorway but with a clipboard. “Are you on the list?” he inquired. “Yes, Caroline on Crack.” “Caroline?” he glanced at the sheet. “Enjoy.”

That was easy. And walking in to the room, it looked like we were the first of 15 people. The bar was already buzzing with nightlifers clamoring for the free Alchemy Vodka cocktails. Surprisingly, Dre didn’t want a drink so I ordered up a Ginger Peach martini all by my lonesome. 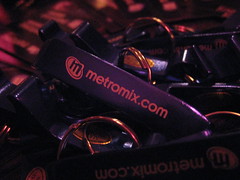 We claimed a little corner table which was covered with freebie bottle opener keychains, postcards and business cards advertising Metromix. Dre and I pocketed a couple of the bottle openers. “You can never have too many of these,” she said.

Twas odd that as the night progressed, we were the only ones interested in the swag. Could people not see these things or were they too shy to touch them?

“It’s an interesting crowd,” Dre noted, looking around. “Why do you say that?” “Cuz everyone here is so pretty.” “Well, that’s cuz this is a high-profile guide since it’s part of LA Times,” I hypothesized. And the crowd was pretty and some were fashionably daring, making for some great people watching opportunities. One girl was wearing gym shorts with her heels, imagine that and…actually that’s the only crazy outfit I remember. Great legs, though. 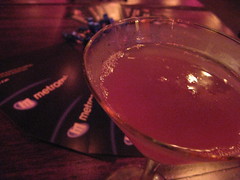 Since Dre and I stuck to our corner, not wanting to navigate the increasingly crowded room, we didn’t get to mingle. A couple of people chatted with us since they wanted to share our table and then Alexandra, Metromix managing editor herself, stopped by to say hi.

She seemed genuinely enthused about her new role at Metromix; she used to be the nightlife editor at LA.com. After a quick chat, she was off again to tape a video of tonight’s event for the site. “It’ll be up in a couple of weeks,” she promised.

I then glanced at my watch. “It’s only been an hour?!” I cried. Dre nodded slowly. 10:32 but it felt like midnight. Since Dre wasn’t drinking anymore and I had my fill, we didn’t see a reason to stay longer. The crowd waiting in line for drinks at the bar looked insane anyway.

We came, we saw, we drank. Good enough. The music got louder anyway to the point 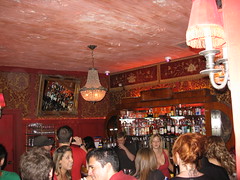 that it was boomingly distracting rather than providing pleasant atmosphere.

Maybe we should have invited more people to come with us. As it was, two people who weren’t going to take advantage of the complimentary cocktails couldn’t possibly have all that much fun. I’ll have to remember that for next time.

And to sum up about Urban Nites, great cocktails and pretty crowd. But word to the wise: Just get to the venue early (aka on time) to be able to take advantage of that open bar.

Look for the Metromix party to go off once a month.