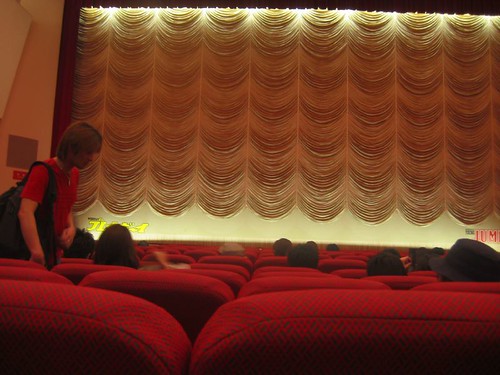 Forget about the blockbusters in mall theaters, try enjoying movies a different way this weekend.

Hairspray 21+ Sing-a-Long Presentation at the Arclight
I really surprised myself by loving this movie as much as I did. It was really fun and colorful and I can only imagine how much more fun it could be if you add sing-a-long words to the screen and cocktails to the movie-going experience. Party at the Arclight! Ferget about picking a character to sing. Sing ’em all, I say.

Back to the Future Ride’s Last Days
Universal Studios’ Back to the Future ride has been around for 14 years but I don’t think I’ve ever took a spin in it. If you haven’t either and love fake flying DeLoreans, better catch a ride now before they close the DeLorean’s doors forever on September 3 to make way for the Simpsons ride which opens in Spring 2008. And if you really want to take a bit of the movie with you, enter the contest for your chance to win a DeLorean. Yeah, hmm, don’t know what you’d do with it though but…yay? Go this weekend before all the radio shows from KROQ, Indie 103 and Power 106 start promoting the last days on their stations next week.

Taxi Driver at Hollywood Forever Cemetery
I just got done watching Godfather II for the first time and am absolutely in love with Robert DeNiro. Yeah, I’m a little behind. Anyway, order up a nice New York pizza pie, pull up a gravestone and enjoy DeNiro in one of his grittiest roles, Jodi Foster in one of her sluttiest…OK, she’s just a child prostitute and doesn’t really do anything sexual here but still. Look at her clothes!

Thomas Crowne Affair at the W’s Backyard
What better way to screen a movie in L.A. than by lounging poolside in a cabana and sipping on high-end summer cocktails? The very handsome heads of Pierce Brosnan and Rene Russo will grace the movie screen in the W’s pool area this Sunday. Fancy! BTW, at the moment cabanas are first come first serve but in the near future they’ll start charging cabana minimums. So get there early and snag one for free while you still can.

Shaun of the Dead at the New Beverly
If you want the opposite of fancy on this lazy day, check out one of my favorite zombie movies of all time at the New Beverly. Order up a frozen Snickers bar for a buck fiddy and sit and squirm during that really gross intestine scene. It’s one of the most hilarious living dead movies ever.