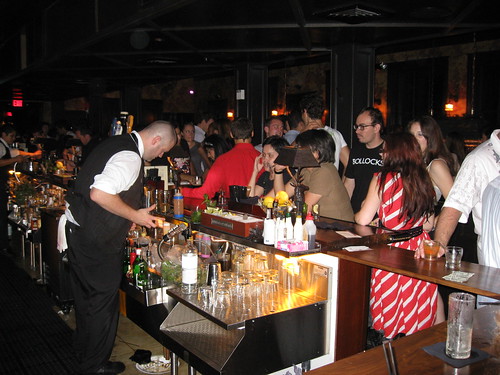 Thanks to all those who showed up to lovely Seven Grand for the CoC 2nd anniversary hoo-hah. As always, great drinks, great company, great setting, s’wonderful time.

I didn’t know what to expect but was happy to be warmly greeted by Damian, my fave mixologist, and Aidan, gracious Seven Grand general manager. Aidan even introduced me to nightclub impresario himself, Cedd Moses, the man responsible for the Broadway Bar, Golden Gopher, and this kickass whiskey bar. I surprised myself by being a little starstruck when he shook my hand. A big deal considering I live in L.A. and running into Oprah at Book Soup doesn’t faze me anymore. But Mr. Moses said he loved my blog (hee! I’m never going to wash this blog again!). 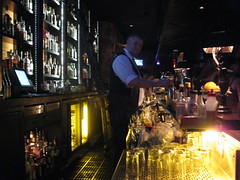 He also told me a little about his new venture opening up later this year, Doheny, which he called “the mad laboratory” where Damian will work as well lending his magical mixing skills to the new cocktail list. I instantly volunteered to be their taste tester and Cedd said he’d let me know. Sweet!

And that’s when I remembered that back when I first met Aidan he had mentioned that occasionally Seven Grand has tastings because so many whiskey manufacturers want the bar to serve their brew. “Oh yeah! You were going to let me know about that!” He replied that he has some coming up next month and would definitely drop me a line. I wonder if I could be an official taste tester for bars. I think I found my calling in life. 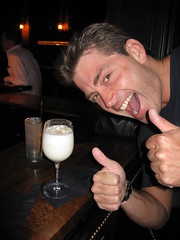 Another highlight of the evening was watching Damian work his magic on a Ramos Gin Fizz he was doing up for my friend Jon. Damian shook and shook and shook some more until a nice frothy mixture oozed out of the shaker. “The original recipe calls for shaking it for 15 minutes.” Jon and I gasped with appreciation.

My group has such reverence for Damian’s skills that whenever he asked us what we wanted to drink, we deferred to him to come up with whatever he wanted to serve us. It’s a treat to watch him work. And really sad when someone just orders whiskey straight or, gosh forbid, a beer from him. Don’t they know that’s like asking Michelangelo to draw stick figures?

OK, you think I’m kidding and being a bit over the top, but you go there and order a mint julep from him. He takes care even selecting which sprig of mint to put in the cup. Crazy Andy admitted to having a man crush on him and who can blame him? 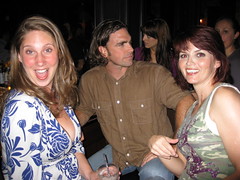 Later in the evening the joint got so packed that I didn’t even bother leaving my barstool at the end of the bar. But I didn’t need to cuz I was having a grand ol’ time. Friends gathered around, I met new people, and I thought I might have spotted “Hollywood” who, for some reason, wouldn’t come over to introduce himself if that was in fact him lurking in the shadows. What’s up with that?

Anyway, here’s to another year of blogging in L.A.! Many people have asked how long I intend to do this blog fer. All I can say is that I’m taking it a day at a time. If I had to think about the long term, I’d stop tomorrow. Fortunately Los Angeles keeps me interested.