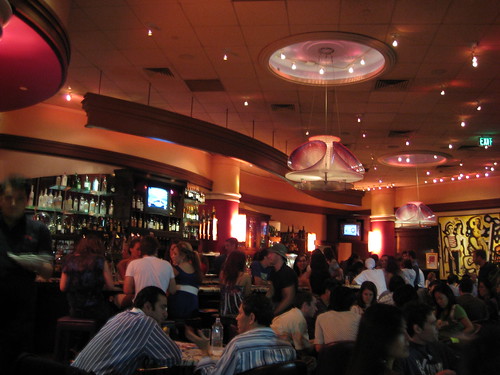 The other night after, or at least near the end of, Midnight Movies’ set at UCLA Hammer, my friend Shelley and I walked across the street to Palomino for its late-night happy hour. We had ducked in before the Hammer event at 8pm but happy hour was over and the wait staff neglectful.

However, after two hours of grumbling stomachs and music appreciation, we were famished and willing to give Palomino another chance, especially since at 10pm it was happy hour again. You gotta love that. Every night 4-7pm and after 10pm, you get 1/2 off appetizers with some $3 drink specials mixed in.

With eyes bigger than our stomachs we ordered the brick oven roasted mussels, crisp potatoes with gorgonzola cream sauce and calamari fritto. For happy hour specials, these portions were huuge! And so bad to eat after 10. Especially those potatoes which were greasy as they were covered with creamy, melty gorgonzola cheese. Mmm and ew! 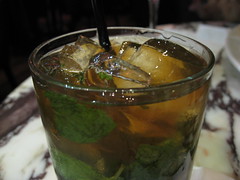 And surprise of all surprises the non-happy hour prices ranged from $7 to $12. After months of $12+ cocktails I thought for sure it was the end of cheaper-priced libations in L.A.

And the cool thing is that these drinks were still pretty strong. I ordered up a mint julep ($8) with Maker’s Mark, mint and superfine sugar. I should have stirred it thoroughly before taking a sip as I sucked down a strawful of whiskey. It wasn’t too sweet but very minty. Definitely no Seven Grand julep but strong enough where I felt its effects after nursing a quarter of it.

Shelley ordered herself up something called a Ten Sage cocktail ($8.50) — Tanqueray No. Ten, sage, lime sour, Alize Gold Passion. She seemed delighted with it, squealing after one sip. Fortunately, she shared some with me and it was so good I regretted my 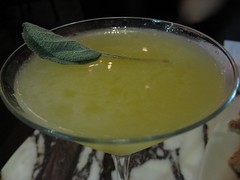 julep immediately. I liked its sweetness which made it go down so easy.

I had originally shied away from it when I saw it on the cocktail menu cuz I’m not all that crazy about those spice rack cocktails. But the sage actually wasn’t bad here. Not too strong where it overpowered the drink with a medicinal flavor. The sweetness of the Alize helped with that.

There were also $3 drinks available but they were things like Budweiser and something called Cosmo Margarita which is just their margarita with some cranberry juice. Still pretty good for three bucks though.

For a late-night happy hour on a Thursday night, the bar area of Palomino, which was decorated like an ’80s club, was packed with an eclectic crowd of young arty folks coming over from the Hammer event and nightclub hoochies all dolled up as if they planned to hit the W later. It made for some very interesting people watching.

Sometimes you just gotta admire people who work the hell out of their fashion faux-pas. More power to them. And it was funny how everyone checked out every person that walked through the entrance, giving them the ol’ up and down glance over. I hated it when it happened to me but then ended up doing that, too.

As I surveyed the large groups of young people talking loudly and laughing often, I wondered if this is what the UCLA students did for fun in Westwood instead of venturing out of bounds to hipper but more expensive bars. Back in the day when I was a young Bruin living on Levering, we had nothing like this. But this is the perfect place for starving students (or cheapskate working stiffs like myself) to gorge themselves on inexpensive large portions of appetizers and strong, cheap drinks and feel like they’re having a nice night out.

The only thing is that it can get packed so maybe get there early to snag yourself and your party a decent seat.