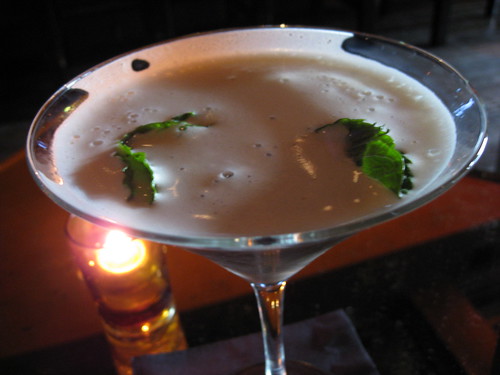 It’s been awhile since I’ve last visited Wilshire Restaurant and Lounge. But I had figured back then that after a night of cougars and Purple Rain martinis, there wasn’t much more to see (although I do want to give Tuesday Sundae Night a visit). That is until the other day when a co-worker raved about a cocktail she had there (“It was ginger and mint and light and refreshing!”) so I thought I should give the lounge another go.

I showed up a bit shy of the happy hour (5 to 6:30pm) where most everything is 50 percent off. Dammit! But since I’ve been on a spending spree lately with regard to $12+ cocktails, why stop now? The cocktail list displayed about nine different concoctions. Most relied on fruit juices, some liqueurs. Nothing sounded overly sweet much to my sensitive (lately) stomach’s relief. 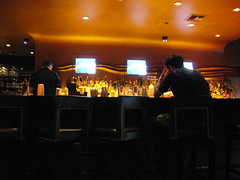 When I asked the waitress which was her favorite sweet cocktail, she enthusiastically recommended the Wilshire Pomtini ($14) which is Ketel Citron, lemon and pomegranate juice. “No, I meant, what’s your favorite SWEET cocktail?” “You don’t think that’s sweet?” I wrinkled my nose at her. “Well, I’m a gin and soda girl myself so what do I know?” she replied, laughing. Fair enough.

So I requested the Mint Chocolate Martini ($14). What I liked about it was that it didn’t rely on peppermint schnapps for the mint but rather simply fresh mint. Since it still had white chocolate liqueur, creme de cacao and cream mixed with Stoli Vanilla, it still sounded like I was in for some stomach troubles. But I was game.

The cocktail arrived at my low lounge table all frothy and creamy-looking with two verdant mint leaves floating on its foamy surface. The looks of drink reminded me of a milkshake except in a martini glass. I took a tentative first sip and was pleased.

There was the refreshing hint of mint. Not too overpowering or sinus-clearing but subtle. Nice. As for the chocolate, it showed up as an aftertaste, like when I breathed out my nostrils I could taste it. But, yes, for a chocolate cocktail, this was pretty low-key and not over-the-top creamy or syrupy, which was fine by me. Although a part of me wished they committed to the chocolate a bit more. Maybe a la one tiny streak of chocolate syrup? 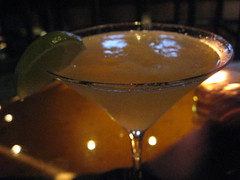 Next up was the Key Westside ($14). The waitress said this was lime-y and similar to a key lime martini but not too sweet. Considering it had pineapple juice and applepucker mixed with its lime juice and Stoli Vanilla, I was a bit skeptical. And I’m not a big applepucker fan. But nothing else on the cocktail menu really appealed to me.

There were the $16 Wilshire Lemonade choices, one cocktail that sounded orange-y and minty, something with Red Bull (are people still serving that?) and a tequila cocktail. Key Westside it is!

To be fair, I had this drink around the same time I was digging into the restaurant’s banana split. So talk about sweet overload! Fortunately I was able to spend some alone time with the cocktail before the dessert arrived. But it still didn’t really stand out to me. I think if you love the ingredients, you’ll like the drink. But as it was, for me, it wasn’t all that memorable. Tasted like juice….with lots of lime.