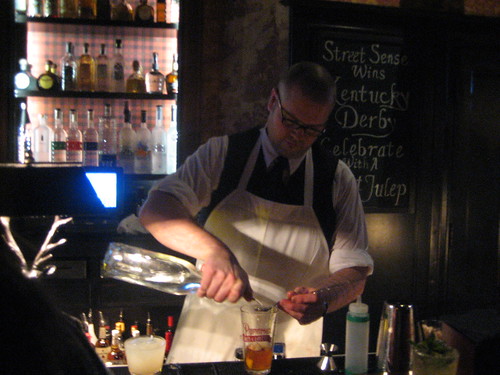 After the disappointing and overcrowded Interpol listening party at the Natural History Museum, my dude and I went to Seven Grand to see if we could still salvage the night. And sure enough, my fave bar didn’t let me down. Not only did I get to run into some of my crackheads who were in the midst of barhopping some of my other favorite downtown bars but turns out the new and more extensive specialty cocktail list is now up and running.

Looks like the Irish coffees are gone and more juleps have appeared on the menu but then again maybe that’s just for the season. My new favorites are the Irish Antidote and the Big Mak, both so delicious and yet dangerously and misleadingly innocent-tasting in that you knock ’em back so fast cuz they’re so yummy and go down easy. And then their potency hits you. Yikes.

After the jump, the yummy additions on the new list (thanks, Damian!):

Damian, my fave bartender there, said that all the bartenders have been schooled in these new cocktails so you really can’t go wrong no matter who you order from. (Although Damian is still my favorite. Heh.)

If you want more for your money and aren’t too much of a whiskey purist, I recommend getting the cocktails. My crackheads who had ordered straightup bourbon, whiskey, scotch from the long list last night weren’t too pleased with the finger of drink they got for their 16 or so bucks. But, like I said, if you want it no other way but straightup, you won’t mind the prices so much.