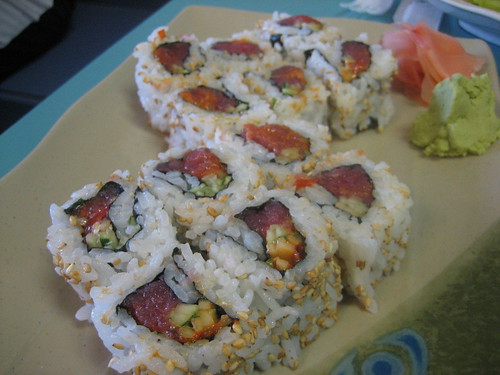 I think I’ve found my favorite sushi place ever. And my hairdresser Grant at Floyd’s is going to kill me since he told me about it but followed up this reveal with, “But you can’t write about it cuz I don’t want anyone to know about it.” And I probably wouldn’t have written about it (wink) if other bloggers hadn’t already done so before me. Sure, there are mixed reviews on Yelp and the delicious life, but I LOVE this place.

Not only can you get 12 spicy tuna roll pieces for only $5.85, but you can get $1.63 green tea ice cream and a wonderfully economical Tokyo Special, which is chicken teriyaki, shrimp tempura, three pieces of California roll, egg roll or green tea ice cream, fruit and vegetables, and rice all for $7.25! And this isn’t sushi that’s scary because it’s cheap. It’s actually pretty good stuff and you get so much food for your money. 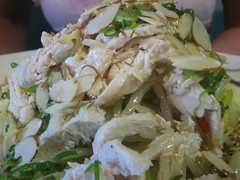 Dre, who is a fan of Feast from the East‘s Chinese chicken salad (itself $6.75 for small), was in awe of the fact of how much chicken salad she got for her $3.95. She ordered the small size (large is $5.65) but that still arrived piled high on a platter. “This is better than that other chicken salad because it has bean sprouts and chopped lettuce, which I lovvvve,” she said. “And I can’t believe how much I get for under $4!”

I had finished my half of the spicy tuna rolls and started digging into my share of the salmon rolls, and she was still working on that “small” salad. Eesh! OK, maybe I eat too fast but still.

The salmon in the roll was cooked but it still tasted good to me. I’m not a sushi connoisseur by any means but I love the stuff and even crave it on occasion. I powered through all 12 of my pieces and then sat back to look at the back wall covered in menus to consider additional things to eat (everything is so cheap!). But there was so much to read, even items repeated twice in a row. Tokyo Roll. Tokyo Roll. 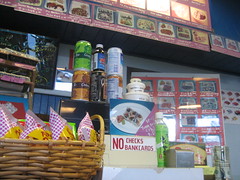 But I guess all that clutter is part of this hole-in-the-wall’s charm. If that wall hurts your eyes, you can always pick up the to-go menu by the cash register which lists the items in categories, just without descriptions.

And it’s the wall and the surrounding area that lists all the different specials, like that Tokyo special, or the fact that you can order a half-order of Spicy Tuna roll for under $4. You won’t find rainbow rolls, caterpillar rolls, dynamite rolls or anything of that ilk but with prices like these, who really cares?

For those curious, brown rice is also available only for the dinner dishes, not the sushi. Boo.

So I finally settled on a green tea ice cream to finish my meal. “Green tea ice cream!” the cashier yelled through a window at the guy in the kitchen and then handed me a small styrofoam cup of the green stuff which looked like it was prepacked. I dug into it with my small plastic spoon and noted how it tasted almost flowery. Didn’t taste as sweet as that green tea mochi I love but it was a good way to cleanse my palate, else I surely would have kept eating more sushi. 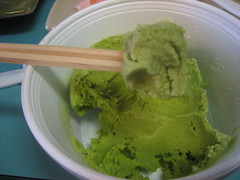 The ice cream was nearly the same hue and texture as the wasabi left over on our sushi platter. “I wonder how these would taste together?” I pondered, holding the wasabi with chopsticks over my ice cream. Dre shook her head.

So I took a bit of the wasabi and mixed it in thoroughly with some of the ice cream then shoved that concoction in my mouth. Yum! Very interesting. It probably would have been even better if the ice cream were sweeter. But of course I don’t know how anyone would find a cup of spicy ice cream refreshing anyway.

So the verdict about Tokyo Fast Food: Dre, who is a sushi connoisseur, found the sushi here to be just as good as stuff which costs three times the price. I love it for the decent sushi, the awesomely cheap prices and the oh-my amounts of food. After we left the restaurant and I again debated whether I should blog about the place, Dre, like Grant, forbade me from sharing this not-so-secret West L.A. gem with everyone. But, like I said, people already wrote about it so no harm done.

BTW, the only thing I disliked about the place is that it’s cash only. Who carries cash?