Cocktail Reviews: Fraiche's So Fresh and So Hee! 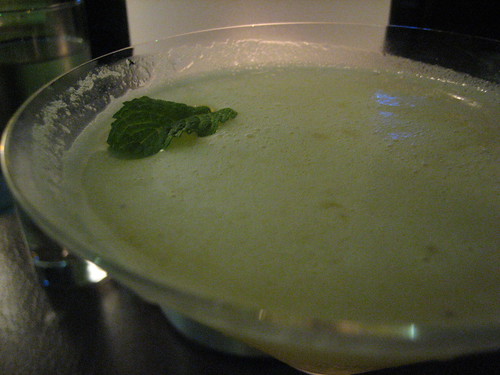 OMG, awesomely potent cocktails with fresh fruit juices can be found at Fraiche in Culver City. Nancy, Dre and I plopped down on the low sofas in the outdoor lounge area of the restaurant to enjoy these specialty cocktails we’ve heard so much about.

Actually Nancy wanted to check out the food and Dre just came along cuz I dragged her there. But when I heard there was another place in Old Tinseltown offering specialty cocktails, other than Ford’s Filling Station, I had to had to give it a go. 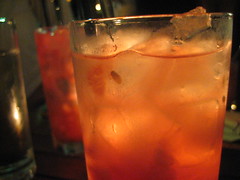 The cocktail list was displayed on a huge chalkboard sitting on a corner of the bar rather than in the standard menu. This kinda bugged me considering the chalkboard only listed the names and prices of the cocktails and not what was in ’em. But I guess that’s what the waitress is for.

Huh? M’OK. In any case this cocktail ($11) lured me in with its vodka-infused watermelon bits (which remind me of Fourth of July parties), vanilla grand marnier sauce and Grey Goose Vodka.

Nancy ordered up the same and Dre took a risk with the strawberry sangria ($10) — Grey Goose vodka with strawberries soaked in grand marnier and lime. I know, “That’s not sangria” you might say. But I’m 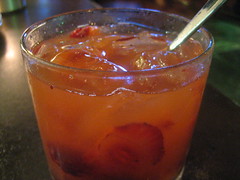 guessing it’s like how specialty cocktails served in martini glasses are called “martinis.”

Ay yah! Were these cocktails potent! The chunks of watermelon swimming around the bottom of the glass, once fished out with the long spoon that came with the drink, were ridiculously strong.

“That’s a funny face!” Dre said when Nancy puckered up and then hid her face behind her hands after sucking down a spoonful of the fatal fruit. “Oh my god, that’s like taking a shot,” Nancy gasped, shoving her drink toward Dre.

I, too, was appalled and impressed by how buzzed I got after getting through only half of my cocktail. Apparently we weren’t the only ones who had a hard time finishing the James Bond as nearby tables in the outdoor patio housed nearly full James Bonds abandoned by lesser drinkers.

The other great thing about this cocktail was that even though it was fruity, it wasn’t too sweet. There was no sugar rim, no simple syrup, no syrupy liqueurs.

Dre was a bit unhappy with her strawberry sangria, though. Not because of the taste but 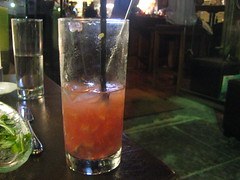 because it came in a glass half the size of the James Bond. “They should serve the sangria in the big glass and your cocktail in this small glass since no one can finish it anyway,” she suggested. “Orrr, they can just serve ALL their cocktails in the big glasses,” I retorted.

Sitting outside we could kinda see the bar inside. There was nowhere for three of us to sit there, which was too bad considering the bartender was putting on quite a show for his customers. He flambe’d something and then poured it into a martini glass. “What’s that?” I asked the waitress. “He’s making a rum julep. It’s not on the menu but sometimes he likes to make his own drinks,” she replied. Ding! Ding! Ding! Ding! I love an adventurous bartender. Next time, I will definitely have to sit at the bar and check out the off-the-menu drinks.

Next up for us was the Yellow Cab ($10) — pineapple juice with vanilla cognac and rum! “It would be better if it had sugar,” Nancy said after taking a sip. But I disagreed. I loved that it, too, wasn’t overly sweet but simply relied on the natural sweetness of the pineapple juice. This tropical drink conjured up white sands on hot beaches. Hawaii!

So that was as far as we could get with the cocktail list this night. Definitely have to come back to try out the blood orange martini and the prosecco fruit-flambe. Twas interesting that they went away from the whole creamy liqueur thing that peppers so many specialty cocktail menus but it is called Fraiche after all. Fresh fruit is to be expected.

I also liked the fact that even though priced moderately high, you get more than your money’s worth in alcohol. Da-yum!