Kwik-E-Mart: No More Krusty Os, Buzz Cola for You 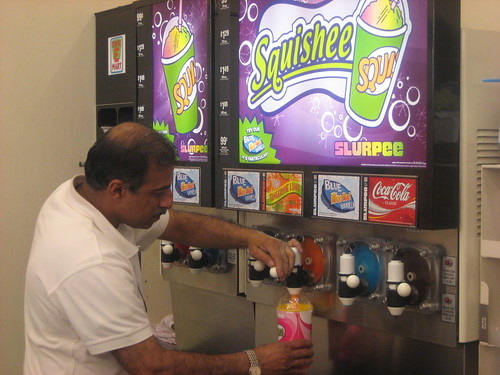 I’ve got some good news and some bad news. The good news: For those who didn’t know, the Kwik-E-Mart in The Simpsons cartoons/upcoming movie is now a reality just for the month of July for eleven 7-Elevens across the nation. 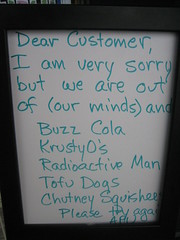 The bad news: The L.A. store is out of Buzz Cola, Krusty Os cereal, Radioactive Man comics, Tofu Dogs, and Chutney Squishee! Rumor has it that the Burbank Kwik-E-Mart is out as well. Hmf.

Apparently Simpsons fans and freaks alike are buying the goodies (except the dogs and squishees obviously) by the caseloads. Probably to resell at comic book conventions in the distant future. My sister in NYC reported the same frenzied rush to stockpile Buzz Cola at the 42nd Street Kwik-E-Mart.

But if you hadn’t gotten a chance to grab your own Simpsons memorabilia/junkfood fix, don’t fret. Apparently they’ll be restocking the Simpsons-inspired products this Wednesday. But you can sate your craving now with one of those ultra-pink doughnuts with sprinkles.

For those curious why there’s no Duff Beer, the most famous of the Kwik-E-Mart products, blame it on the PG-13 rating of the movie. Apparently, beer does not equal good wholesome fun. Who knew?