Pink Taco: Brought to You by Ron Jeremy and Slash 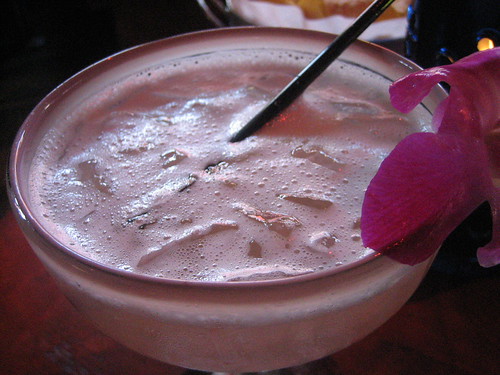 When you hear the words “Pink Taco” what do you think of? I knowww! Pink. Tacos. Me, too! When I heard that this Mexican restaurant, which originated in Vegas, opened up in chi-chi Westfield Mall in Century City, of all places, I had to check it out. That name, that font.

VIP grand opening party Thursday night), the joint was already abuzz with most of the patrons sitting on the breezy outdoor patio. Did 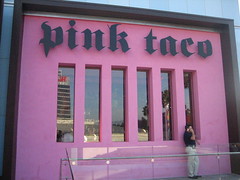 EVERYONE here learn about it through Thrillist, too? We only had to wait about 15 minutes or so to get seated though, so not too bad.

Our server Matthew was a cheerful, naive, fresh-faced fellow, even carding me when I ordered the Pink Taco Margarita ($9.95). Fer real? He sported the same big smile that everyone here did. Kinda creepy but maybe they’re all just super excited because they just opened.

That’s another thing. This place seemed overstaffed as there were five hostesses and one host at the entrance and the floor was crowded with wait staff making the rounds at all the tables. I don’t know how many people served us our food, took away our plates and gave us water.

Regardless of this ample help, my margarita showed up after about a 15-minute wait garnished with an orchid and not as pink as I had hoped. A blend of Trago Reposado, lime juice and sweet agua de jamaica with hibiscus extract, this signature cocktail tasted all right. Strong, I guess. Um… 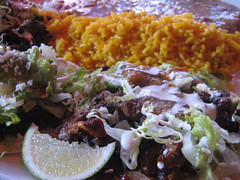 OK, since I have a cold I couldn’t really taste much of anything so this won’t be a food review so much. All I know was that the free chips that came at the beginning of the meal were a bit bland and soft, not stale but moist, I guess. My carne asada tacos ($11.95) which arrived with rice and refried beans was spicy. I liked the guacamole. And fyi, my boyfriend, himself a picky and healthy eater, just shrugged when I asked him how he liked the chicken enchiladas he ordered.

The drink list and the menu itself are currently on the limited side when you compare it to the menus listed on the restaurant’s Web site. Matthew said it was to cut the new kitchen some slack and that as things progress more items will be added. Right now the dessert menu only contains two items, with no tres leches or fried ice cream to be found. 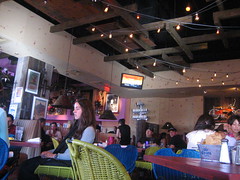 “Did you check out that waitress?” my bf discreetly gestured to the tall dark-haired one who had walked passed. “She walks like she thinks she’s on a runway.” That’s when I realized, looking at all the waitresses dressed in their clingy black tank tops (the hostesses wore pink ones) emblazoned with “Pink Taco” across their chests and sashaying down the aisles. This place looks awfully familiar. Oh yeah! Hooters!

And apparently, in Scottsdale, Arizona, where the second Pink Taco opened, the cantina has generated the same sort of notoriety as Hooters. Half a dozen people and four emails have objected to its suggestive name, trying to get the CEO Harry Morton to change it. Whatev!

PT’s problem in L.A.? Tea lights. One of the waitresses went to every table apologizing and blowing out the candles because the fire marshall had a problem with ’em. The 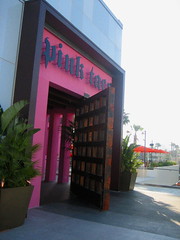 reason? Word has it that a patron at one of the other restaurants in the mall had leaned over one of the tea lights setting her hair ablaze and now no tealights for anyone.

A manager from the Scottsdale venue here to help out with the opening stopped by our table and chatted with us, saying that the fire marshall was just being hard on the new place for packing in 1,700 people in this 400-something capacity scene. He said that the fire marshall even pulled the plug during a musical performance with Ron Jeremy and Slash. Actually maybe that was a good call.

But if loud, tequila-soaked memories are what we can expect this new bar/restaurant to bring to the new and fancy-fied Century City mall, it could get interesting. I wouldn’t come here for the tacos (POST EDIT: Changed my mind about ever returning thanks to PT’s poor marketing decision for Cinco de Mayo 2011.)