Abode: No, I Will Not Drink My Vegetables 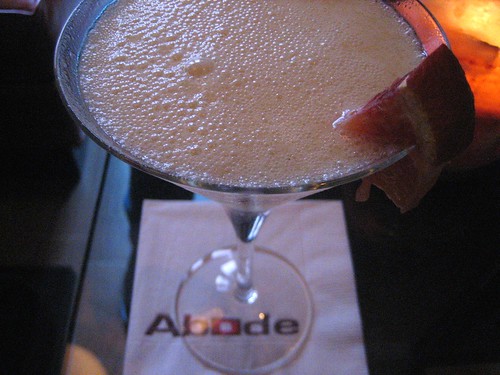 Abode’s Black Pearl may not be the $4,350 Diamond Cocktail at London’s Sheraton Park Tower (possibly the world’s most expensive cocktail with its 0.6 carat diamond garnish) but $300 is still quite a bit to pay for a martini. The Tahitian Black Pearl Martini to be exact, which is ultra-premium coconut Pearl Vodka and a splash of blue curacao garnished with a AAA 12mm Tahitian Black Pearl (appraised at $800) — all proceeds go to Heal the Bay.

Funny thing is, even though the ultra-chic restaurant sits right next door to Tengu and down the street from Ivy on the Shore in Santa Monica, not one foolish soul with money to splurge has ordered one up yet. And goodness knows, I ain’t gonna do it. But I thought I should let you know that it’s there if you want it. Someone tell Captain Sparrow.

Instead I settled on the Dreamsickle cocktail which is a paltry $14 in comparison and probably the least-complicated sounding of the drinks listed on Abode’s specialty cocktail list. Most of the other concoctions were just too flowery or spice-racky for me to consider what with rose petal garnishes and jasmine and basil extract and muddled lavender essence. Blech!

The restaurant offers a global, biodynamic wine list, with about 20 selections by the glass. The bar features specialty cocktails like an elderflower green tea martini.

No, my OJ cocktail, which hearkened back to the orange and vanilla creamsicles of my youth, consisted of Grey Goose Vanilla, triple sec, some cream and organic fresh-squeezed orange juice, keeping in theme with the restaurant’s green standards of sustainable materials usage and organic ingredients.

Garnished with a small wedge of blood orange, the frothy drink initially made me gag as I inhaled a lot of vodka in that first sip. Perhaps I was still thinking it would taste like an innocent creamy orange drink when in fact it was not. And it wasn’t as sweet as I thought or vanilla-y for that matter but it did have a hint of chocolate flavor for some inexplicable reason. Hm. And it tasted “healthy” what with its freshness and ample orange pulp. However, I didn’t really enjoy it all that much. I wanted it to be a bit sweeter. It didn’t have to be syrupy but some sugar would have helped, even if only as a dab on the rim. 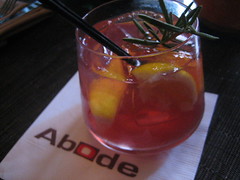 Erin, blogger extraordinaire and my partner in crime in exploring fancy restaurant lounges, had ordered the Spanish Rosemary cocktail ($14), a pretty little pink thing of rosemary-infused gin and cranberry juice garnished with a huge rosemary sprig.

She thought it delightful and enjoyed its strong rosemary flavor, but then again, Erin is a cook so she probably likes to ingest spice rack spices in every form available. I kid. But, yeah, I wasn’t crazy about it.

I almost ordered the Raspberry Sidecar ($16 of Courvoisier cognac, raspberry liqueur, Cointreau and muddled lemon) to follow up my first cocktail but the waitress/bartender took too long to check back with us so I changed my mind.

When we first got to the lounge at around 7:30 on this Tuesday night, the waitress was very attentive. Not hard to do considering we were only one of the three groups in the small bar area. But later on, more people showed up taking up the seats at the bar and outside on the patio so we didn’t see her as much after that. Why didn’t anyone help her? They had people futzing with the heating lamps outside and buzzing around the restaurant area but the lounge itself felt neglected. 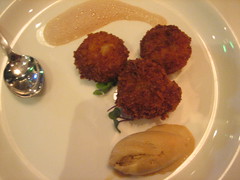 When we had ordered the banana and mango croquettes dessert ($10), we were forced to wait 20 minutes or so. When the bartender/waitress came out from behind the bar she looked at our empty placemat and wrinkling her nose said, “They didn’t bring out your dessert yet?” and then turned on her heel toward the kitchen looking like she was going to knock some skulls. Aw.

Just as well since the croquettes weren’t really worth the wait after all. The three little banana and mango bits were so heavily breaded that you tasted the crunchy bread more than anything. So it didn’t even taste like dessert but rather reminded me of the deep-fried veggies my mom used to make. And “chocolate froth”? This was purely decorative as there wasn’t enough to really soak the croquettes in. Nice bubbles, but it looked like someone accidentally spilled their latte on our plate.

There was also a thin streak of red which we assumed was raspberry syrup but couldn’t be sure. Again, just for decoration. The cardamom caramel ice cream wasn’t all that sweet either but really only served to balance out the dryness of the breaded fruit. Still, Erin and I were disappointed.

Looking at the dessert menu, I pooh-poohed the saffron chocolate mousse with strawberry taragon salad ($10). I just don’t like that idea of mixing salad salad with sweet salad. But I guess this goes down well with the healthy folk. And what happened to the “study in chocolate” everyone was talking about? I guess that is only available in the restaurant section.

Suffice it to say, Erin liked the lounge. And yes, it was pretty what with its dark walnut wood tables and orange leather couches, but I really wasn’t crazy enough about the cocktail or dessert menu to want to come back. Maybe if I have friends who are health nuts or vegetarians….they would get a kick out of this place. And since it’s away from the heavily trafficked Ocean Avenue drag, it’s hidden away from tourists. But if you want to do an expensive and swanky barhop in Santa Monica, hit up Voda, Tengu and Abode — all within stumbling distance of each other.