Blue Velvet: Where To Take a Dip Before Downtown 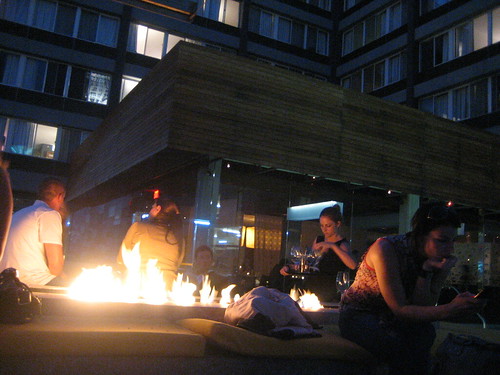 Wait a minute, here I have been reading all about these tea-infused martinis at Blue Velvet but when I finally went there to check out this schwank downtown restaurant/lounge there were none to be found. In fact the specialty cocktail list only showed seven drinks ($12 each), none of which mentioned anything about Earl Grey with Maker’s Mark. Hmf!

However, I must say that the cocktails were unique. No chocolate martinis or any such “martinis.” Here, you’ve got a beer cocktail, wine spritzers and unusually named drinks that didn’t seem to fit the theme of the venue.

The girls (Dre, Erin, Nancy) and I perused the list, but nothing really appealed to us except the Fuji-Ricky, which sounded delightful and sweet but not syrupy. And by golly it was. Even though I think I’m over pear vodkas now since it seems like everyone is doing something with them, I found this cocktail very light and tasty with a soft fruity flavor. However, the presentation left much to be desired as it just showed up on the rocks with an apple slice floating on the bottom. Could have been anything. Vodka tonic? Gin and soda? 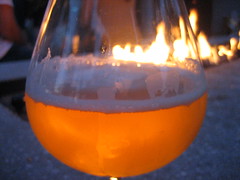 Dre ordered up the beer cocktail which was served in a snifter. When I first spied it on the list, the description didn’t hint at anything that was in it so I skipped it.

Fortunately, Dre took the bullet for me and found that it wasn’t so bad. In fact it was pretty potent considering it was just beer and rum. But she ended up nursing that one drink for the time we were there. Mostly because she said it got warm fast after sitting next to the fire pit on the outside patio. I took a sip of it and found that it just tasted like beer to me. I couldn’t taste the sweetness of the rum but it tasted good. Not $12 good but good. Something to try at home perhaps.

For food, I tried the mini Monte Cristo sandwiches ($9) which showed up on a wood plate as four little crustless squares neatly lined up in a row. Cute! I know I could have tried the braised short ribs that everyone talks about but I just have a thing for those sandwiches with the jam and ham? Yum.

These didn’t have the same setup as the traditional MC in terms of ham and cheese stacked on bread with a side of raspberry jelly since they were little bite-size pieces but I enjoyed them all the same. Meanwhile Nancy and Erin ordered up something with lardo on it which they swear was good but you’d have to read their reviews to know for sure. 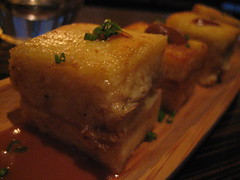 I almost ordered the crab beignets since I had had my heart set on the blue cheese beignets that were listed on the Web site but were nowhere to be found at the restaurant. Update your site, people! But, yeah, decided against a second dish since I didn’t feel like spending $40 for just drinks and apps tonight.

We didn’t stay too long at the Blue Velvet. It was nice sitting out on the patio by the pool and fire pit and taking in the view of downtown but we weren’t too inspired to order more food or drinks. At least I wasn’t. I had made the mistake of ordering a Stoli Vanilla with Coke for $10 and it wasn’t even strong. I saw the bartender just do a quick pass of the vodka bottle over the glass. Wait, what was that? Boo!

Half lounge, half foodie paradise, the interior is an assortment of vibes, with two exotically-designed lounges (named Blue and Red), a chef’s private table and a dining room overlooking a pool deck backlit by the downtown skyline…

I think I’d come back though. I enjoyed its swankiness (I can’t believe it used to be a Holiday Inn!) and the staff was very friendly with no attitude. Blue Velvet would be a great place to grab some small bites before diving into the downtown bars if you want something fancier than Wolfgang Puck Express or the Pantry. Or even come here on a date where you can cuddle near the fire pit and take in the night skyline. There’s the Staples Center! 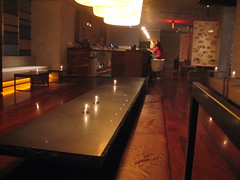 And when it gets cold outside, the inside is just as lovely what with the surprisingly comfortable white barstools that fit your butt just right or the ample low couches.

If you have a lot of friends in tow and it’s a quiet night at the lounge, maybe take over that large sunken granite table which apparently seats 17 and makes you feel like a little kid since the seat cushions are on the floor.

After finishing up my weak Stoli cocktail, we decided to head over to the Figueroa Hotel in search of stronger and cheaper drinks.

Parking hint: If you don’t feel like paying for valet ($5) you might be able to find some street parking after 6pm just off 8th Street, southwest of Garland Avenue where The Flat (home of Blue Velvet) is located.