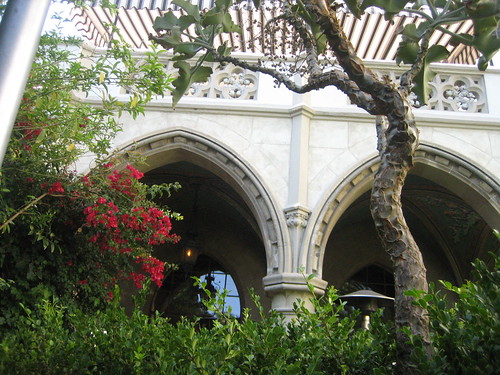 There’s something about the Chateau Marmont that just makes you want to do naughty things. I’ve heard that Scarlett Johansson and Benicio Del Toro got caught having sex in one of the elevators, John Belushi took one drug too many in Bungalow #3, and many an A-list celeb has been spotted canoodling in dark Chateau corners with other celebs away from paparazzi’s prying cameras.

What did I do that was so bad? Uh, I aided a “friend” of mine in snapping some shots in the hotel and on the patio despite the Chateau’s strict “no photography” rule. We had taken a break of fanciness between our liquid brunches at the Saddle Ranch and Cabo Cantina, wanting to switch it up and hang with a crowd other than the inebriated and obnoxious…and then rejoin said inebriated and obnoxious at Cabo after. 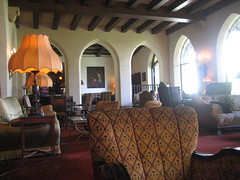 Walking up to the hotel, we already couldn’t help but feel like we were doing something wrong as we snuck in behind a group of hotel guests since the entrance wasn’t huge, obvious or inviting. The valet had directed the group where to go: Take this door and follow the stairs up to the lobby. Doing so, it felt like the back way, like we were ascending the emergency stairwell.

Since it was such a lovely day, we wanted to sit out on the patio but as we just walked ahead, past the hostess stand, a waiter followed us out to let us know that we actually had to be seated by the hostess first. “There aren’t any available seats on the patio right now,” she told us. “How long is the wait?” we inquired. “Well, people linger…” she replied, shrugging. So we settled on sitting inside where plush couches, a piano and a big book titled Artists and Prostitutes awaited us. However, the tall windows weren’t open so it got stuffy really fast. On top of it, they had seated us in the far corner of the room away from the main entrance. We sat and waited for a server to give us menus. 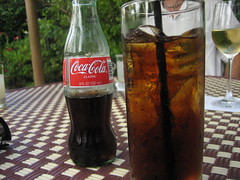 After about 5 minutes, we saw the hostess point us out to a server. After another 5 minutes, the server finally came over. A very friendly guy, he gave us the wine list but after perusing the list of $18 glasses of champagne and $10 glasses of Riesling, I settled on a Coke. Dre had reminded me that I still had the flask I took with me to Spaceland the night before. I hadn’t touched the Jameson within since I had ordered two Stoli Vanilla and Cokes at the club instead. Twas a good thing, too, since my small bottle of Coke was $4. My friends ordered up their margaritas and Dre ordered a glass of Pinot Grigio ($13).

And then “my friend” started to snap a couple of pics of the room. The setting reminded me of Hearst Castle: very old with a 1920s vibe. The furniture seemed old, too, and I half-expected it to smell like my grandmother’s living room. But it didn’t. Anyway, that’s when the hostess came over and politely told us about the “No Photography” policy. Why have such a policy? I dunno. I can only assume it’s to protect the celebs who like to hide out here.

It wasn’t until we saw Penelope Cruz leave her seat on the patio that I understood. I saw her walking toward the window I was looking out of and briefly made eye contact with her as my internal dialogue went something like this: “Wait…is that Penelope Cruz? No, it’s not… shit! it is! Eek, she caught me looking at her!” Very pretty lady, even without makeup. I…I mean, my friend didn’t take pictures of her though. We played it cool.

But I can see why they’re so opposed to photography here. Celebs will have a place to retreat to. After all, didn’t Lindsay Lohan call this place home for over a year? You only heard of her messing with Paris Hilton’s ex here but you never really saw pictures of it.

So what did we get shots of? Well…each other sitting around the table once they let us sit outside (yes, we took Penelope’s “exclusive” table on the side), the appetizers, the surrounding buildings and our receipt. This was all done on the DL and we giggled after each snap like bratty kids thrilled with not getting caught. 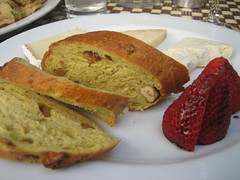 Quick and dirty about the food and drinks: The cheese plate with balsamic strawberries and hazelnut bread was OK but definitely not $13 OK. It was only three small slices of cheese in varying degrees of soft to hard, dry bread and two succulent strawberries cut up into eight pieces. The calamari ($11.50) came with a side of cocktail sauce and a creamy tartar sauce and was lightly breaded and pretty tasty. It was a decent amount which was quickly devoured by the four of us. Lastly was the yellowfin tuna which was lightly seared and arrived looking like a hand-cut sushi roll. This was my favorite. I loved popping these in my mouth. Fortunately the rest of my table didn’t feel the same way, so as they were busy stuffing their faces with calamari, I took most of the tuna.

My friends who had ordered the Silver Patron margaritas complained about how strong they were. And after taking a sip of it, I concurred between gagging and coughing. Strooonng! It was so strong that they thought the glass was rimmed with sugar not being able to taste the sharpness of the salt. Barely drinkable. But when we got the bill and they saw how much they were paying for them ($15.50 each), they quickly downed the last of the potent contents. 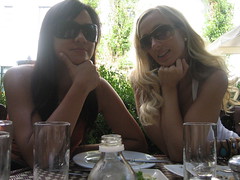 The service here, despite our being noncelebrities, was actually all right. In the beginning we felt like we were being ignored as it took about 30 minutes for us to get our drinks. But when we got up to leave, that’s when they moved us out to the patio. The waitress out there was very sweet without a trace of attitude even though just moments before she was serving Penelope and now here we were, the buzzed foursome fresh from Saddle Ranch.

Would I come back? Probably not. But it is something I recommend tourists and Angelenos do at least once. It’s so Hollywood. All that history, scandal and scenery…it’s a must.