Bloggers Social at the Library Bar: A Study in Beer 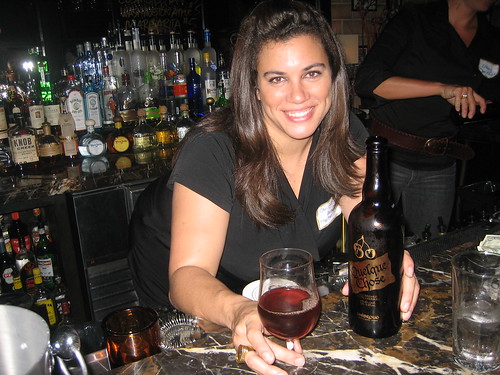 If you’re an L.A. blogger, chances are you turned up at the Library Bar last night for the free beer tasting hosted by the sassy Christina Perozzi, the Beer Chick and the genius creator of the LB’s scrumptious beer list. And if you did, I wish I met you but as it was I spent most of my time sitting at the bar trying to be the good beer student by going through the tastings and marking up my “library cards” with notes. 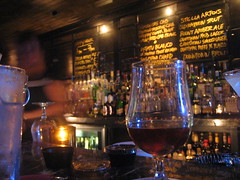 At the event — created by Slife PR as a social for food, lifestyle, everything L.A. bloggers to generate even more buzz about the Library Bar — attendees were given a collection of cards when they checked in at the door.

The cards were done up in the style of the ones you used to find (or still find? — I haven’t been to the library in ages) in library books to check said books out. But instead of date stamps and the names of borrowers, these provided information about the eight beers on hand for the tasting; things like a brief history and flavor notes in the beer.

Below are some of Christina’s notes cited from the cards as well as the stuff I jotted down which show why I can never be a beer chick:

There were about two more beers to go (Flying Dog Road Dog Porter and Brouwerij Westmalle Trappist Tripel) but I wasn’t able to get to them before the two-hour social was up. I did, however, skip ahead to the “secret” 9th beer which was a cherry lager. Twas definitely cherry-flavored and dark but not belch-worthy in terms of effervescence. “Tastes like a lambic,” one of my fellow beer tasters, Elina from LAist, noted. Christina, ever the helpful teacher, said that the cherry beer tastes best when warmed up, like for a cold night. Mm! 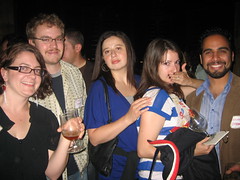 And, yes, I was able to meet some bloggers (who were nice enough to come up to me so I wouldn’t have to get out of my chair, heh) — Lisa and Elina from LAist and a couple of guys from an organic food and beer blog — but mostly I stuck to my friends Erin, Elliot and Nancy and her crew cuz I’m shy like that.

What did I learn at the Bloggers ‘N Beer event? That light beer is really only concentrated high-alcohol content beer mixed with lots of fizzy water and not really much better than drinking regular beer. That Canada really only has one good beer. That, like wine tastings, you swirl the beer in the glass to open up the flavor. That I’m definitely a Stout and Porter girl.

That the Beer Chick is coming out with a book for women about beer. That the sisterhood is alive and well as the LAist girls deflected incoming lecherous drunk lawyers who were harrassing me earlier in the night. And finally, that bandanas, according to some people, never ever go out of style.

More pics from the social.