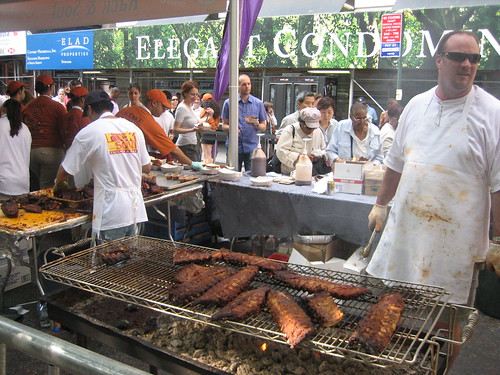 I can’t believe I still love meat despite spending a better part of the day smelling, looking at and devouring ‘cued-up brisket, ribs and pulled pork at the 5th Annual Big Apple Barbecue in New York. But I do, gawd help me I do.

At first I was really nervous about attending this much anticipated summer block party in Madison Square Park. I figured it was going to be overcrowded and the long lines would effectively annoy me from eating at all. But with my American Express Bubba FastPass handy, my brother-in-law David and I were able to grab our meat goods with a fair amount of ease. There were still the long lines, like for the 17th Street Bar & Grill‘s award-winning baby back ribs, but we simply avoided those and opted for the smaller-to-no lines.

I have to say that the Amex FastPass was really worth the $100 (the general pass only entitles you to $84 worth of food for some reason). This golden ticket got us access to not only quicker and shorter food lines, but to the outhouses with no lines and portable sinks to wash our hands. And splitting one pass between two people was more than enough as we were really only able to stuff ourselves with three bbq dishes and a beer each. At the end, we bought eight yummy fried apple pies from Stehling Brothers to use up the rest of the pass. Mind you, we wanted to only do the bbq in a day instead of both Saturday and Sunday.

So if you come both days or just drink a lot of beer, the FastPass will easily see you through that. And unlike last year’s event where FastPass users complained that the express lines were as long and slow as the general public lines, the punch card as opposed to the swipe card helped speed things along. 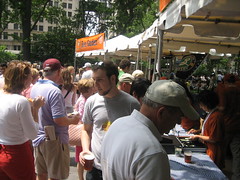 Everything was priced the same for simplicity: $8 for barbecue meat and side dish, $6 for beer (Heineken or Brooklyn Lager), $4 for fried apple pie and $2 for drinks (sodas and bottled water).

The beer garden was crowded with nowhere to sit and enjoy our brew and ‘cue so we just downed our beers and then joined the other thousands of bbq fans on the grass for an impromptu picnic and people watching. Just as well since the Brooklyn Lager keg was tapped out and I wasn’t feeling the Heinie.

Live music on the bandstand near the beer garden provided the festive albeit frenzied atmosphere.

Some of the goodies I sampled:

I wish I was able to try the 17th Street Bar & Grill’s ribs since they were the only award-winning meats out of the 13 pitmasters’ goods present. But that long line didn’t seem to be moving at all. 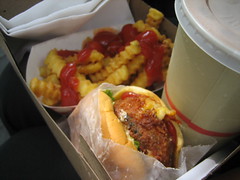 Note to vegetarians who are dragged to the BABBQ by meat-loving friends: You can pick up a Shroom burger ($5.25) from the Shake Shack in the park. It’s mushrooms and vegetables held together by cheese and grilled. My vegetarian sister said that unlike most garden burgers it was crispy and savory. She also picked up some seasoned crinkly fries and a chocolate shake. So she wasn’t left hungry while we gorged ourselves on meat.

All in all a good time was had by all at the bbq. We retired on the grass sitting on the plastic bags that were passed out with the freebie North Fork Bank baseball caps and rubbed our bellies.

More pics from the BBQ.