Taste Test of Red Mango, the OG of Cute Yogurt 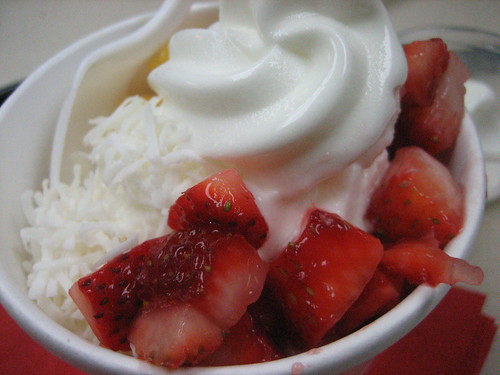 If you follow the yogurt news, you probably already know about the whole Red Mango vs. Pinkberry feud where Pinkberry is accused of totally copying the whole Red Mango concept from its kawaii decor to its Cap’n Crunch toppings. Honestly I really didn’t care. I don’t even like Pinkberry, or yogurt shops for that matter. But Dre‘s friend works for Red Mango and invited me to come check out their goods before the first L.A. Red Mango store opens in Westwood on July 10.

The test kitchen in Culver City was in an office building near Fox Hills Mall and the testers consisted of me, Dre, Dre’s friend and, for some reason not made apparent to me, the Western developer of Beard Papa who brought yummy cream puffs for everyone.

We were led into the kitchen which was being manned by new hires for the store. They were young and enthusiastic about the product while Red Mango President and CEO Daniel Kim stood off to the side to answer any questions they couldn’t answer. 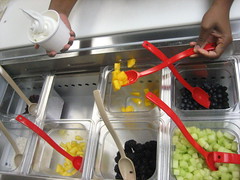 Since the green tea flavor, which I hear isn’t as blech as Pinkberry’s, wasn’t available in the kitchen, I had them top the plain with fresh strawberries, mango and shreds of coconut — so yummy! Their fruit is fresh, unlike, say, Jamba Juice’s which uses frozen fruit since its cheaper.

Cereal toppings were also available like Cinnamon Toast Crunch and Fruity Pebbles but my yogurt cup already runneth over. I asked why they didn’t have a chocolate flavor yogurt and the server said that they had dark chocolate Ghiradelli chips that would do the job. What no carob? Thank gawd! He gave me a sample of the yogurt with the tiny chips and he was right. Still good and chocolatey.

I asked if they will have special ready-made combinations for customers who don’t know what combos they want, but that’ll only be available for the “Frozen Yogurt Blenders” aka smoothies; stuff like Pina Colada.

So what makes Red Mango’s yogurt different from Pinkberry’s? Apparently Pinkberry doesn’t even use real yogurt so it had to remove all reference to its product as “yogurt” from its stores and literature. Now people simply refer to it as “Fakeberry” or “Faux-gert.” But more importantly, Red Mango’s plain was a bit sweeter and not as off-putting in sourness. It was also so creamy and I actually liked it.

So, yeah, Red Mango is still gearing up to make a splash in the States and everything is currently in a state of development from its aprons to its Web site (redmangousa.com) which will be up and running in two weeks.

The grand opening in Westwood is on July 10 with a VIP grand opening on July 12 for VIP, press, etc. And if you’re a blogger and would like to get a sneak preview taste of Red Mango, drop Elizabeth a line at elizabeth [at] redmangousa.com or give her a ring at (310) 215-4888, ext. 1107. But you have to be a blogger; the point being that they want to get the word out.