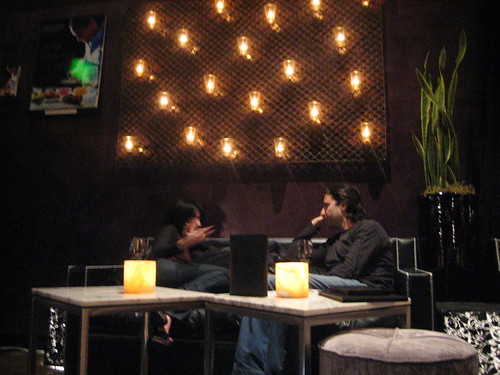 Last night I met up with my blogger biatches, Nancy and Erin, again. This time at hip restaurant Table 8 on Melrose. I think it’s going to be our new thing: meeting up for drinks and drinks at various cool places around L.A. so we can offer our own take on it on our respective blogs. Either that or just have a good time imbibing with likeminded adventurous souls. Erin had picked out Table 8 and when I looked at the CitySearch and Gayot listings online touting “$$$” (I usually like to aim for “$$” at the most) I checked with her to make sure we were just going there for drinks. “That was my thought…they supposedly have a nice lounge space,” she verified. Cool!

And when I walked in for the first time, I couldn’t help but notice, “As a matter of fact, it is a nice lounge.” When you step in off the street, sidestep the tattoo parlor entrance and go through the door, you immediately land in the dark, candlelit lounge, decorated with plush couches, low tables and ottomans. Groovy.

Apparently, this place recently had a makeover. Before, the dining room was where the lounge is now and vice versa. More practical considering the buzz and high traffic should be near the entrance and not where everyone is eating their dinner.

I got there a bit earlier than the girls again (aka on time, heh). The host who greeted me when I walked in was extremely nice and helpful. Actually EVERYone who worked here was nice, helpful and attentive. But it was more than that. It was like getting special treatment for no apparent reason.

At 8pm on a Tuesday night, the lounge area was quiet. There was a couple sitting on one couch and a couple of people at the bar, while the adjacent dining room was buzzing. It was when I sunk into one of the plush leather couches across from my neighboring loungers that I noticed the gentleman was Ted Raimi.

When I pointed that out to my friends, they had no idea who I was talking about. But if you know who Sam Raimi is (the director of Spiderman 3) and are familiar with his work, then you’ll know who his character actor brother is. Anyway, past reviews have mentioned that the Hilton sisters had showed up for Table 8’s grand opening, Calista and Harrison were seen dining here once before. And now…Ted.

So the lounge menu displayed six specialty cocktails ($12 each), beer (Heineken is $6) and a variety of appetizers which ranged in price from the $4 kobe style slider to the $9 Wisconsin artisan cheese plate. The host and bartender said that their Basil 8 cocktail (Absolute vodka, white grapes, basil, ginger ale and bitters) and their South Central (Herradura tequila, cucumber, mint and lime juice) were their most popular cocktails. “The South Central is great for people who are usually scared of tequila since it has a nice light taste,” said bartender Mike. Sold! 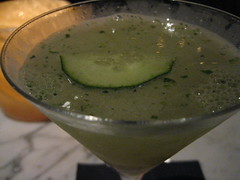 The martini glass arrived at my table filled with something that reminded me of that salad dressing you get at Greek restaurants. It was a light green liquid with bits of green and a slice of cucumber floating on its surface. And one sip confirmed it. Yup, salad dressing. “This is the most popular cocktail?” Oddly enough, Erin’s friend, Rachael, who is a personal chef and also a blogger, loooved it and bought me a cocktail so that she could have mine.

I ordered the Mama Woo which sounded more up my alley with Absolut Citron, peach schnapps, passionfruit and OJ. Sure enough, it was fruity and sweet with no trace of alcohol. 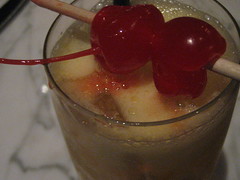 Actually it seemed like all the cocktails at our table came without a trace of alcohol. At least in taste. I don’t know if that was due to a light pour or if the ingredients effectively masked it. But we also tried the Pisco Sour (Pisco, lemon juice, bitters and grated cinnamon) and that was very light, blech and not for me, but very light. Erin liked it though and Nancy was meh about it.

For food, we went to town ordering just about everything the lounge menu had to offer:

The other desserts (although there were only three altogether) were equally intriguing. Warm chocolate chip cookies came with strawberry milk which sounds so cute for some reason. The ice cream sandwich is made out of yogurt ice cream which sounds either yum or blech depending on your inclination for yogurt.

All in all, I don’t know if I’d come back to Table 8 even though the staff was incredibly nice and there was ample street parking. It’s just that 1) I’m a huge cheapskate and if I’m going to pay $12 for a cocktail, I better love it; 2) the small plates although unusual and inventive were too small for the prices — either you share it with one other person or order it for yourself; and 3) the prices…did I already mention that?

But if you don’t care about that, you might be interested to know that although they don’t have a happy hour, they have a late night menu that starts at 10pm which features $8 specialty cocktails, $6 glass of wine and $4 beers. There aren’t any special prices on the apps, though. Tuesday nights are special for some reason since you can get half off any bottle of wine and there’s a $50 prix fixe five-course dinner available.