Face-Stuffing at the Dessert Decadence Tasting 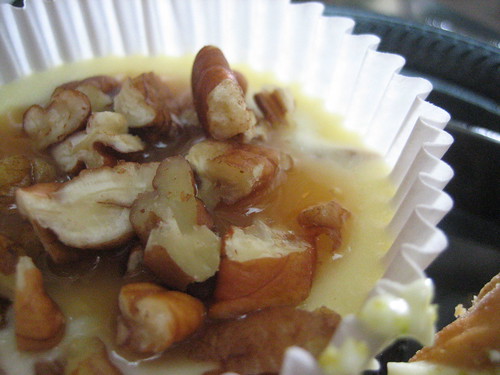 Sponsored by CozmoCard, the same folks who brought you the swanky fun Casino Night at Barker Hangar last summer, this event was heaven on earth for all the winos and sugar addicts in attendance. Although with only about 13 food vendors and 15 wineries present, Dessert Decadence was considerably smaller than last year’s event. And with good reason as it was sorta difficult to maneuver the sold-out tasting in a small space with a heaping plate of goodies in one hand and a wine glass in the other.

At the peak of the festivities, seating was difficult to come by as the restaurant which served as a partial venue for the event was open with some tables set aside for diners. Fortunately, the hotel allowed us to enjoy our goodies in the lobby. Unfortunately we weren’t in the middle of the action. Dre and I had to take turns foraging for food and bringing back so that we wouldn’t lose our seats. 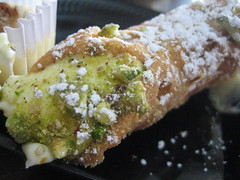 All the reps at the event were very friendly and excited about their products, eager to tell you all about the history of their companies, etc. Some notable goodies included the unusual and pretty Smoked Salt chocolate from West L.A.’s Compartes Chocolates, the scrumptious caramel pecan crunch cheesecake from Chunkomunko, Essential Chocolate‘s impressive raspberry chocolate brownie and the creamy banana-pistachio cannoli from the Cannoli Kings. I steered clear of the Yummy Cupcakes table since I think I’m over cupcakes now. Although I did see the requisite red velvet cupcake in attendance.

One of my favorite wines at the event was Giessinger Winery‘s dessert wine, Surrender. But truth be told I’ve liked this one since I first had it several years ago at the winery itself in Santa Barbara. I ended up drizzling this rich chocolate port on a plain cheesecake and serving up to my girlfriends during game night. They loved it. 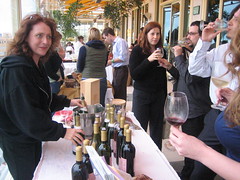 There was also a fabulous raspberry-flavored champagne from Midlife Crisis Winery which was poured by the charming winery owner, Jill Mittan, who told us why some of her wines were named after her beloved Australian shepherds. Dre had also brought me back something called an Almond Roca which was simply chocolate port and champagne and OMG was that delicious. Don’t know where she got it from though, but apparently the rep had created it when she told him that I like chocolate. Right on.

Like last year, I wished that the wineries sold wine at this event but due to certain restrictions they could only offer wine club pamphlets and order sheets of their wineries as well as small tasters pours (no full glass pours) of their wines. I made do with collecting the propaganda and didn’t drink too much anyway since I had had more than my fill of that from the night before at the artwalk after party. On the other hand, that didn’t stop Dre. 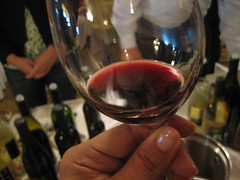 Eyeing the selection of Tempranillo, Syrah and Cabernet Sauvignon before me, I asked one wine rep how she chose which wines to bring to the event. “They asked me to bring wines that would complement the desserts,” she said matter-of-factly. Yeah, I can see that but with a bunch of sugary stuff, I just don’t think Syrahs taste good when accompanied with chocolate orange macaroons. Is it just me? From what I was able to see, Giessinger Winery had the most dessert wines on display what with that Surrender and their sweet Riesling-like Jolie wine.

Being a wine and dessert event promoted on estrogen-friendly sites GoldStar and Top Button, there were lots of stylish girls killing their diets at the Loews this night. It would have been the perfect venue for single guys to make the rounds. Somebody should have told them.

Luckily enough, for those who couldn’t make it to this event, CozmoCard has some goodies for foodies in the coming months; one being a junk food extravaganza hearkening back to your childhood and a bbq party to rival the Big Apple BBQ.