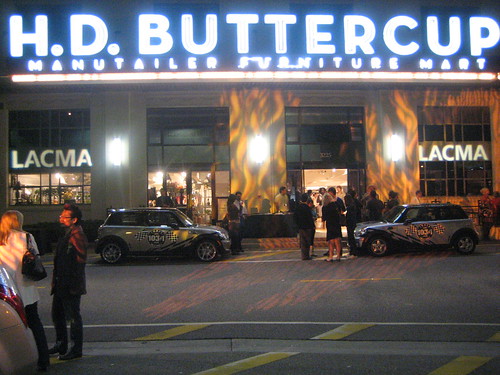 How to survive a sold-out artwalk after party?

Although Saturday’s Culver City artwalk after party, hosted by LACMA’s Muse program, was packed with live music, free drinks, and plenty of eye candy, I don’t think I’ve ever had to work so hard to have a good time. 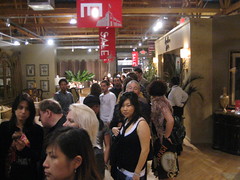 It started off with what must have been an hourlong wait for a free drink. There were three bars dispersed throughout the event stocked with different flavor Absolut vodkas, mixers and Grolsh beer and each had its own long, unmoving line.

With no specialty cocktails to hassle with, I really didn’t know what the problem was and why it took so long for two bartenders to serve vodka and mixer in a glass. It wasn’t until we finally got to the bar that I realized that perhaps the “bartenders” weren’t real bartenders after all but rather servers assigned the task of mixing drinks.

Although very nice guys considering this stressful task, the “bartenders” fumbled over themselves trying to find the right flavor vodka sitting in front of them for each drink request and spending way too much time chatting with each guest. I mean, that’s really nice and all but we need to keep the drink line moving, people. Also, why couldn’t they have had servers circulate the party passing out cocktails, too?

Trying to outsmart the system I had asked for a pear with Sprite (yummy!), mandarin with Sprite (meh) and my Absolut favorite, vanilla with gingerale. Sure, I had to walk around with three drinks in my hands but it was the best idea I’ve ever had considering I never went thirsty and I was properly cocktailed for the festivities. 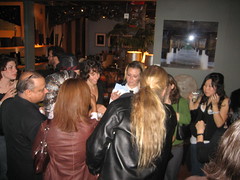 Now for the food. In my travels around the vast venue of HD Buttercup checking out to see which bar had the shortest line, I came across a section of the store where a large group of people had congregated for some reason. It was the rug department and it was dimly lit. There was no special display or bar or anything.

But when I saw a lone server emerge from a door at the back of the department and the group of people suddenly swarm around said server like sharks swarming a bucket of bloody fish parts, it became clear.

All these people milling about for no apparent reason were actually waiting for food! There were no food tables or servers walking around the party and so this was the only way we’d get fed.

When some people tried to get a jump on the servers by hanging around the entrance as soon as they came out, the store security guards shooed them away since they were standing too close to the rug merchandise with their cocktails in hand. One server showed up with a tray in hand saying, “OK, I’ve got some rat flesh on crackers here” while the crowd swooped down on him anyway. 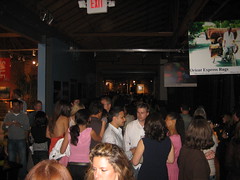 My friends and I were able to grab a tortilla chip with a bit of shredded pork (from Ciudad) on it as well as some very yummy and very spicy tuna on crackers (from Beacon). We spent a good half hour trying to fill up on these bits and pieces until we felt like we wasted enough time playing shark.

In the main party room with two of the bars and the dj, we found furniture we were allowed to sit on and nursed our cocktails while checking out the crowd. I love arty people. It’s here where you get the greatest people watching moments. You’re apt to find the craziest dressers since loud mixed patterns are simply excused as artiness. Eccentric weirdos are considered artistic.

Standout people-watching moments included a man with a limp mohawk, a girl wearing a bubble shirt without pants, a Japanese dude with a serious mullet, and of course, the crowd favorite, fake boobies everywhere. 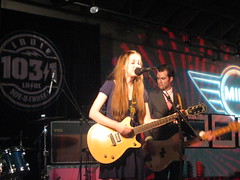 Later the band Giant Drag hit the stage. At this point I don’t remember too much except that they played a very nice rendition of Chris Isaak’s “Wicked Game.” And then they were gone after about five songs (?).

Someone spilled a drink on one of the coffee tables sending one of the servers into a tizzy. A man wearing a Foosball: The Movie T-shirt asked me to check out his shirt. My boyfriend stared down a guy who kept trying to smell Dre. And I nearly peed myself waiting in the long women’s bathroom line after the guys in the men’s bathroom shooed me away from theirs.

In any case, despite the negatives I felt like I at least got my money’s worth in drinks and entertainment. The crowd at this year’s artwalk was actually twice the amount of last year’s and the fire marshall showed up to make sure things were up to code at this event. So all in all a very successful turnout for Muse. Hopefully next time, they’ll be more prepared and better able to accommodate the masses.