Whist's Guinness Cake: Still Waiting for the Bomb To Drop 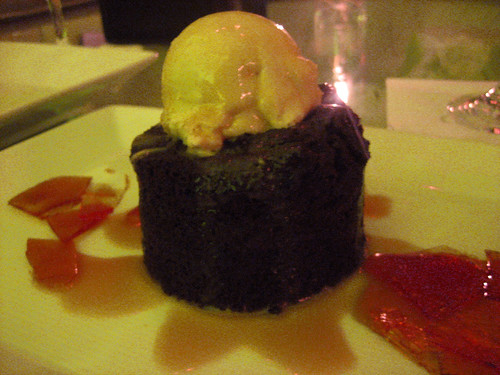 Guinness Cake served with Bailey’s Irish ice cream, whiskey sauce and caramelized sugar. Are you kidding me? Brooke Mosley, the newish pastry chef at Whist in the Viceroy Hotel and former pastry assistant at Grace, created it and I of course had to check it out since it’s got all my favorite ingredients. So I dragged along fellow bloggers, Erin and Nancy on this evening of decadent desserts and expensive cocktails at the chi-chi Santa Monica hotel. On a Tuesday night, I knew that we’d have no trouble finding a spot in the bar, as well as breezing in dressed in workday casual wear for that matter. 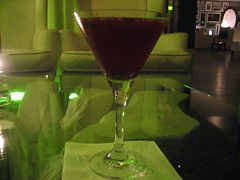 I had arrived a little bit earlier than the girls so picked a spot of elegant couches and armchairs by the front entrance and outside of the main bar area. You don’t have to sit in the restaurant to take advantage of the dessert menu.

I must have sat quietly for about 10 minutes before the server came by to see if I needed anything. In truth I was too tired to even try to get her attention but figured that sitting by myself in a large open space on this fairly slow night would make me easy to spot. Guess not. Oh well. At least she was attentive and nice thereafter.

After Erin showed up I ordered the Liquid Remedy ($15) cocktail from the Cameo Bar’s cocktail list. A mix of Belvedere vodka, blueberries, orange and pomegranate juice, it tasted like a healthy juice drink with no hint of alcohol at all. Dangerous! The cocktail itself in the candlelight of the bar looked blood red with chunks of stuff floating in it…bits of shriveled blueberries, but I tried not to look at it as I sipped. At least it tasted yummy.

But I really envied Erin for her cocktail, Giggle Water ($15). Cute name and Erin actually giggled ordering it. That was my original choice, too, but when I saw that it was made of Grey Goose Pear, moscato and lemon, I backed off. Let’s just say Absolut Pear was the theme of my Memorial Day Weekend. However, after sipping this delightful cocktail, I instantly regreted my decision. It was light and sweet. Almost like a dessert wine but not too rich or thick, and it was more potent, obviously.

Erin and I agreed that although our cocktails were delicious, they were definitely not $15’s worth of deliciousness. I think that’s one of the most expensive cocktails I’ve ever allowed myself to purchase. But then again, it is the Viceroy.

For her dessert, Erin decided on the Gingerbread cupcake ($11). Served with brown sugar, pecan pralines and sweet chicory sauce, the cupcake’s dry gingerbreadness sorta balanced out the ubersweetness of its sugary accompaniment. Again, we weren’t too impressed. Presentation was random: a toasted marshmallow glob posed as the cupcake icing atop something that didn’t really resemble a cupcake. A scoop of vanilla ice cream sat on a spill of sauce alongside chunks of pecan pralines. And actually, the pralines were too sweet, nearly making me gag from all that saccharine. 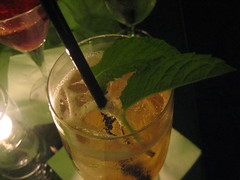 Nancy joined us a little later and ordered the Chocolate Banana Tart ($11) and some cocktail with Maker’s Mark, peach and mint ($15). I glanced at the former and took a sip of the latter which I wasn’t too crazy about it. The whiskey with the mint just tasted medicinal to me.

Back to my Guinness cake ($11). I wanted it to be my most favorite thing in the world ever and perhaps that’s where the problem lies because it fell short of my alcohol-infused expectations. It wasn’t as rich and flavorful as I had hoped.

The dark cake itself was dry and the Guinness flavor was only a light aftertaste on the back of my tongue. Same could be said of the Bailey’s ice cream which simply reminded me of the innocuous Ben & Jerry’s version. And where was the whiskey sauce? If it was there, I suspect it was upstaged by the hard pieces of caramelized sugar which overpowered all the flavors with its candy sweetness.

For something that promised a good time just by its name and ingredients alone, the Guinness cake was blah. Not hearty or even all that sweet (not counting the hard candy). And it’s not like I expected an Irish Car bomb on a dessert dish. I just wanted my favorite ingredients of whiskey, Guinness and Baileys to make more of an impact. Rather, it merely hinted at something that could have been great.