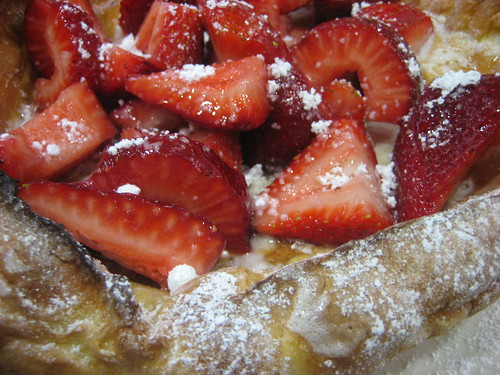 Just when you think you know pancakes…flap jacks…hotcakes…along comes the Original Pancake House. OK, it’s actually been around since 1953 but I just heard about it and visited the Redondo Beach location today. My friend suggested it since he was craving the oven-baked cinnamon-glazed apple pancakes. And before I could even think to compare this breakfast joint to IHOP, its Web site set me straight.

For a franchise, it has a pretty eccentric and ridiculously extensive menu with every type of waffle, crepe, flap jack, and pancake you can think of. AND they boasted pretty high-quality ingredients like 93 score butter and fresh grade AA eggs as well as fresh in-house roasted coffee. Sold!

On a late Memorial Day morning, the front of the restaurant was crowded with people waiting to be seated. We had called ahead hoping to save some time and get our name on the list, but nothing doing. They don’t take call-aheads or reservations. We’d have to suffer the 30-minute wait like everyone else. But the drunken toddlers of the waiting young families outside kept us entertained. I have this fantasy that it’s actually brandy and not milk that these kids are drinking from their sippy cups to make them stumble around and throw tantrums like angry little drunkards. I know. Evil.

The regulars include beach dudes and a fair smattering of bikers, but the tables inside are occupied mostly by members of the Greatest Generation, whose taste in natty sports shirts and intricately carved canes is as refined as their taste in pancakes and waffles. 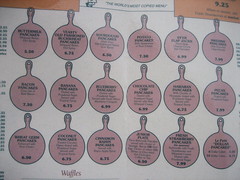 Finally we were seated in a disappointingly boring-looking dining room of beige walls and yet it was made lively by the packed tables and animated patrons pumped up on sugar and coffee. At least I was promised the best pancake breakfast ever.

I ordered the Dutch Baby with fresh strawberries ($12.20) — an oven-baked German delicacy, very eggy and served with lemon slices, powdered sugar and whipped butter. I liked how the latter ingredients arrived separately in neat little containers for me to add to my pancakes myself, like accessories for food!

The Dutch Baby actually looked like a bowl made out of thick crepe but with a thick egg bottom, perfect for containing the sliced strawberries in the center. But not before I slathered it with the butter. Then I added the berries, sprinkled them with the powdered sugar and then squeezed some lemon juice over everything. No syrup. All together, the ingredients created its own sweet syrup.

Now, surprisingly enough I’m not a big dessert-for-breakfast kinda girl. Give me a bacon-egg-cheese something and I’m good. And this, though not my usual thing, was pretty yum. Not too sweet and the fresh strawberries gave it the illusion that it was good for me. Sure there was sugar and lots of butter, but, hey, look at them luscious strawberries. Just in season and delectable. 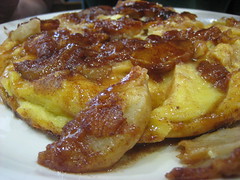 I traded a quarter of my baby for my friend’s order of the apple pancake ($9.95) to sample the bit of heaven that caused us to drive all the way to Redondo for breakfast. Pictures of it don’t do it justice, making it look like a big ol’ mess. But the Granny Smith apples glazed with Sinkian cinnamon was yummy. It tasted like a hot apple pie. Very sweet but the black coffee complemented it perfectly. Like the Dutch Baby, it was thick and eggy.

But now that I experienced two of the most popular “specialties of the house” I think I’ll have to come back for the bacon waffle. Mmm, bacon. Or my own order of the apple pancake…or even one of the other 30 breakfast cakes on the menu.

The only thing I wasn’t too crazy about was the service. It was spotty at best, with the server only coming by to drop things off and refilling our coffee once. And I can put away three or four cups at breakfast. We even had to get up to get our own to-go box. But I’ll chalk this up to it being a really busy day for the place and at least they weren’t rude or anything like that.