Camping and Chillaxing in Joshua Tree

Rush-hour traffic, angry people, deadlines…are there times when you just want to escape from all that for some peace and quiet? May I suggest camping in Joshua Tree? Despite what you may think, sometimes I, too, like to unplug, if only for the novelty. So this past weekend, a group of friends and I headed out to Joshua Tree National Park for a much needed respite. The desert seemed like a perfect place to escape to — so spacious, natural and quiet. Granted, in late May it’s also too hot to be comfortable. But better now than during the dog days of summer. 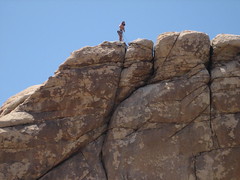 For just a couple of nights in J-Tree’s Indian Cove, our cost per person was about $14 and $15 per car for the park entrance fee which lasts you a week. Very affordable if you want a quick retreat.

Our campsite at Indian Cove was a perfect place to settle in. Surrounded by countless piles of ginormous boulders, it proved popular with the rock climbers as many tramped through our campsite to scale our nearby rock walls.

With only an outhouse (my least favorite thing in the world, blech) and no running water at this campground, we had to clean our hands with Wet Naps and wash our dishes and brush our teeth with bottled water. And forget about showering. Yup, I lived with a growing layer of sweat, sunscreen and dirt for three days. But I was surprisingly OK with it.

Another thing I was surprisingly OK with was the slower pace in J-Tree. Most of the nights were spent staring at the campfire getting whipped around by 15-mph winds. Although I did half-heartedly try and get 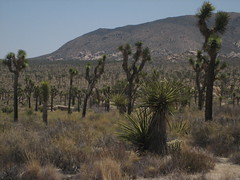 people to check out Andromeda Astronomical Society’s monthly star gazing party that was going on the Saturday we were there. And apparently the Joshua Tree Music Festival was also happening the same weekend.

But nope, we stuck to scrambling on the rocks, checking out the nature trails, eatingeatingeating and trying to stay cool from the heat. Which was fine by me because that desert heat sucked the life out of me. It was even too hot to take a nap.

Sometimes it was so quiet there, I felt like I lost my hearing. Kinda cool that it can get THAT quiet. That is until the camping families on either side of our site started to act up. On one side was a group of four fortysomething dads with their brood of bratty boys who liked to blast on The Chicken Dance Song repeatedly until we felt ourselves going insane. Then they switched to “Rock Lobster” and other cheesy songs; blasting them at full volume so it seemed like there was a desert ’80s rave in our midst. Fortunately my friend Val was able to reason with them so they turned down their music a little. But at this point it was too late as the Chicken Dance Song became the internal soundtrack of our camping trip. 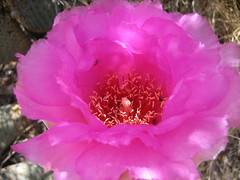 So what exactly did I think was so great about camping in the desert? Seeing the Milky Way blazed across the night sky, climbing rock mountains and being able to get myself down again without any special gear, seeing a bright pink cactus flower, chillaxing with my friends and enjoying the banana boat — an uberdelicious treat involving bananas, chocolate, marshmallows and brown sugar wrapped in foil and placed over the campfire. Mm-MMM!

If you’re thinking of making a trip out there, you might want to hold off til things cool down in the fall or until next spring when the desert blossoms return around April/May.