Nikki's Local 72: To Happy Hour or Not Happy Hour? 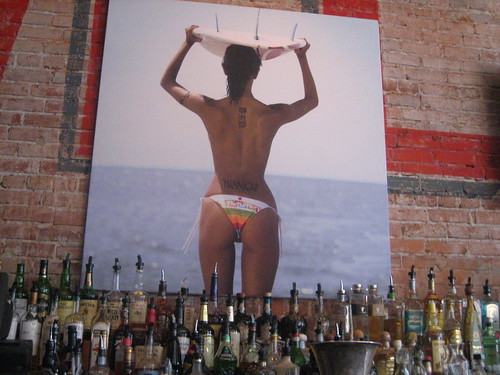 I’m torn because I think I just had the worst happy experience ever. But I can’t chalk it up to a place I’ll never go to again because of its AMAZING dessert, pretty tasty appetizers and unusual events.

I dropped by Nikki’s in Venice for its happy hour: 1/2 off appetizers and two-for-one well and call drinks. But don’t let this “deal” fool ya. Actually their appetizers are regularly priced around $12-$13 so you’re really paying $6-6.50 for apps. Not the greatest bargain considering there are wayyy better happy hours out there with $3 apps. But my happy hour companions, Venetians and regulars of Nikki’s, had a point: This deal is pretty good for the area. Still, I don’t know if I’d drive all the way out here, troll the streets for its limited parking and risk harassment from sketchy characters for a $6 plate of nachos. Granted, these were reallly good nachos…probably some of the best I’ve tasted, but still…. 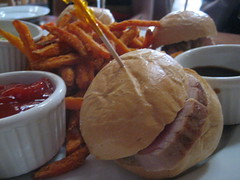 We had the chicken wings, quesadilla and the ahi tuna sliders with sweet potato fries, too, and they were all pretty deelish. If I had room in my stomach, I probably would have tried the tri tip sliders and grilled sirloin sliders, too.

BUT the service was unbelievably bad; apparently not unusual for this place judging from online reviews. Jill, our waitress who was apparently suffering from a cold, hung out by the waitress station most of the time and she committed what I consider big service faux-pas: 1) She only brought water for the person who asked for it (a good waiter asks everyone else at the table if they want water) and 2) she didn’t give us a heads-up that happy hour was ending and check if we wanted anything else at happy hour prices. In fact, she spent most of the time on what appeared to be a date as she sat at a nearby table and chatted with a male companion. Whatev!

The thing is, we couldn’t bring ourselves to leave the bar since not only was it Absolut Wednesdays where you get $4 Absolut drinks, but the Budweiser girls were there giving away Budweiser Select to anyone who would take them. OK, that’s pretty cool and, like I said, the food was pretty tasty. I guess the bad service is a tradeoff. 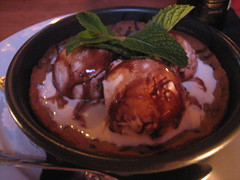 Another reason to stay longer, besides the weird bathroom with an apparently see-through glass door, was the dessert dubbed “Venice’s Most Famous Cookie” — a half-baked half pound of chocolate chip cookie dough in a deep dish pizza pan, topped with three scoops of vanilla ice cream. (You might know it from BJ’s Restaurant and Brewery as the Pizookie.) This sinfully scrumptious offering was only six bucks! The Nikki’s regulars swear it’s the best you’ll ever have. And OMG was it goooood. Granted, it was a bit too sweet to go with my Absolut Vanilla and Coke but I was able to put most of it away. Who doesn’t love warm and melty chocolatey cookie goodness with ice cream? Or maybe I was just suffering from a contact high brought on by the waft of pot smoke that seemed to hang in the air.

And, yes, there was a two-page specialty cocktail list but not very imaginative. The most exotic-sounding drinks were the blood orange margarita and Passion, which was champagne, vodka, passion fruit puree and strawberries. All their cocktails seemed too sweet, but I was intrigued by the one called Milk Moustache which was Stoli Vanilla with white creme de cacao and cream. Unfortunately, none of these were subjected to happy hour prices. Instead they were all about $10. 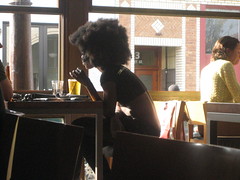 If you really want drink specials other than the $4 Absolut Wednesdays, maybe check out Pink Thursdays where ladies get a taste of pink champagne (Veuve Clicquot Rose) and martinis are $5. Day drinkers are invited to enjoy the bloody mary bar on the weekends, starting at 11am.

Apparently on weekend nights, Nikki’s turns into a jumping dance club as they clear out the tables in the middle of the room for the dancing upper-class beach crowd. A long line forms after 10 but at least there’s no cover.

Would I give it a second chance? Well, now that I see that the pros seem to outweight the cons here, surewhynot? I just won’t have any expectations when it comes to service and instead just let the cookie dessert soothe my cares away.