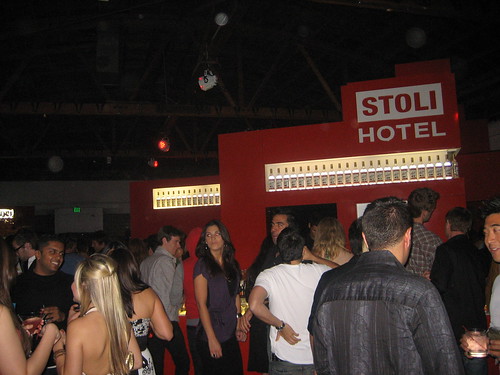 Just what is that Stoli Hotel you see and hear about everywhere? I even saw it on an animated billboard near my apartment. At this point you probably already know that it’s not a real hotel, but rather an invitation-only hotel concept party that travels from city to city. Currently it has taken up a month-long residence in the 10,000-square-foot space across the street from the ArcLight on Ivar and is inspired by the Hotel Moskva, the hotel on the Stoli label. And many celebs have already strutted its red carpet to enjoy the free Stoli cocktails, the turntable stylings of celeb DJs DJ AM and Kid Millionaire and the C-lister elbow-rubbing. 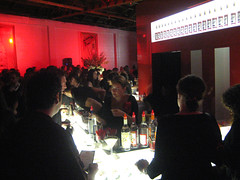 Now, why go through the trouble of building a fake concierge counter, a fake spa and fake hotel bedrooms in this temporary venue? I tried asking the “concierge” but then she gave me some scripted answer about how Stoli comes from Russia, blah, blah, blah. And then when I asked her if the list of cocktails they were currently featuring at the open bar tonight was available on the Stoli Hotel Web site she replied, “I can’t give you information I don’t have. I haven’t seen the Web site.” Very odd considering the site was launched especially for this occasion and shouldn’t she be well versed in something like that?

But with a little of my own research, I found out that since Stoli is under new distribution from Pernod-Ricard, the hotel was a way to generate a buzz and make the brand relevant even though it is one of the best-selling vodkas. Nowadays there are so many vodkas from so many countries — France, Sweden, Korea, etc. — that Stoli wanted to bring attention back to its, um, Russian-ness.

So the company decided to focus on the aspect of the brand’s history with the most impact: The hottest hotel bars in town, which [Senior Brand Manager Adam] Rosen calls “the cutting edge of cocktail culture, whether it’s the Mondrian in L.A., the Delano in Miami, or the Gansevoort in New York.” 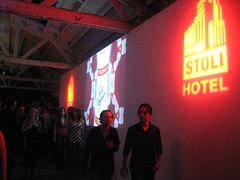 I have to say, walking around the space sipping on my not-too-strong vanilla Stoli and Coke, it didn’t remind me anything of Russia. But there sure was a lot of vodka. The specialty cocktail list included an intriguing variety, from raspberry-lychee martini to spiked blueberry lemonade. Unfortunately I didn’t get to try ’em since it’s a school night and I was driving.

Pretty girls wearing tight, short dresses and clack-clacking on the concrete floor in their high heels were everywhere. And there were also lots of pretty boys for these pretty girls. Everyone was checking each other out, each with a drink in their hand. So not my scene, but fascinating to watch. Like watching that Planet Earth series.

By 10:30, the fake spa was already all booked up with party guests eager to experience their free hand and feet massage or chair massage. But the concierge assured me that I could come back to the hotel on Friday the 18th between 11am-4pm to partake of the free “spa” services then. Unfortunately this is only available to those on the Stoli Hotel guest list. 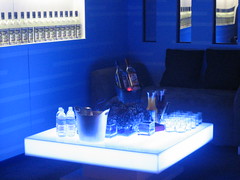 How to get on the guest list? Couldn’t hear the concierge lady all that well because of the loud music but I think she said that Stoli has been running promotions on the hotel for awhile and collecting emails that way. (I was able to get in thanks to Elliot at UrbanDaddy.)

How to get into one of those VIP rooms done up like posh hotel rooms? You can’t unless you kiss up to the Stoli execs, movie studio execs or the celeb guests. The night we went, the Prince of Saudi Arabia and/or the Sons of Hollywood had the Stoli Blueberry room reserved. Very surreal.

That was pretty much all there was to see. I didn’t notice any celebrities but when I was standing out in line waiting to get in, someone behind me said, “BJ and the Bear is here!” Wow. Oh wait, I did see that Indian actor who played the Oompa-Loompa in Tim Burton’s Willy Wonka movie waiting for a spa treatment.

So the month is almost over and the hotel’s L.A. days are almost numbered before it moves on to New York, Chicago, San Francisco and Miami. But not before it hosts a Playboy party and film premiere after-parties.