Meltdown Etc.: It's the Cheesiest! 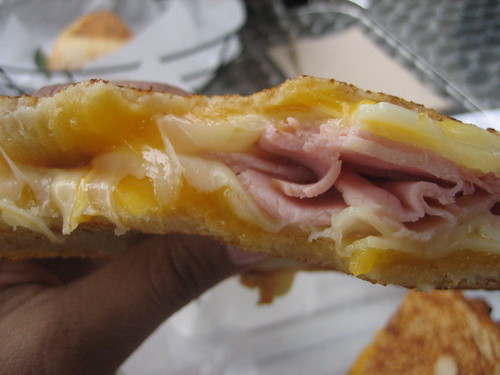 FINALLY! I made it to the coveted Culver City grilled cheese sandwich shop, Meltdown Etc. I would have gone sooner but for those crazy 11-3 weekday hours. Those hours are just mean. AND who displays a breakfast menu under your nose without it being available yet. Mean!

Anyhoo, once I got my order of the Classic 3 Cheese Sandwich (sharp cheddar, muenster and fontina on sourdough) with smoked ham ($8.50) I got over it. I almost ordered the Turkey Melt ($8.75 — brie, turkey, arugula, cranberry-horseradish mustard on walnut bread) until the lady in front of me ordered the Classic. Hmm, that sounds good, I thought to myself. I’m easily swayed. I also ordered the Goat Cheese, Fig & Honey sweet melt ($5.50) to go, ya know, for research.

dotsara chowed down on her Cheddar, Ham and Apple sammich ($8.50) and called it the “best grilled cheese sandwich” she’s ever had. A mighty statement considering her aunt is a professional chef who constantly boasts she can make ANYTHING better. But she loved how the sweetness of the apple butter complemented the smokiness of the ham.

Erin enjoyed her Italian Deli melt with mozzarella, Italian cured meat, peppers and pesto ($9.95) (Note: it’s actually supposed to come with olive oil and balsamic vinegar but for some reason they used pesto instead.) 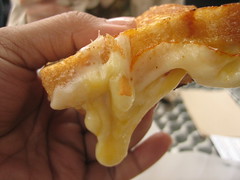 Back to my sandwich, I liked it a lot. Of course I might be insane to say this but three cheeses seemed almost too much, making for a gooey, greasy mess. But I guess that’s what you get when you order a melty grilled cheese sandwich. The ham didn’t really add anything to it. I almost wished that I ordered roma tomatoes (50 cents extra) instead to tone down the sandwich’s sinfulness.

Actually I had a bite of dotsara’s melt and hers was wayyy better. The apple butter in her sandwich gave it something extra special. Although the bread was buttered and grilled to perfection on mine and the cheeses are my favorite kinds, I wasn’t as head over heels for my order as I thought I was going to be.

As for the sweet melt I took to go, I had dotsara and Erin try it out first since it was neatly cut into four triangles and although they agreed that it was OK they also said they probably would make their own at home before ordering a whole one from Meltdown. “It’s got more jam than cheese,” Erin noted and after I tried it I agreed. Where’s the goat cheese? Disappointing. 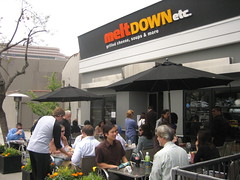 In any case, it was a nice little lunch excursion all the way from Santa Monica (they don’t take faxed-in orders yet). Getting there before noon we were able to snag the last available table on the outdoor patio. Past noon, a long line developed out the door as people stared at the menu of so many wonderfully cheesy offerings. You can choose between the Meltdown specialties — regular sandwiches — or the sweet melts which consist of goodies like brie and apricot, Nutella and banana or PB&J.

I definitely have to come back once they have their breakfast menu up and running. That Cleo breakfast melt (dill-chive cream cheese, smoked salmon, scrambled eggs and caramelized onions on rye bread) sounds like a great way to start the day.