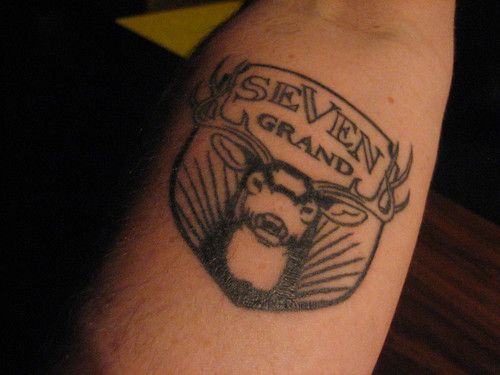 I wonder if anyone has fallen down those stairs at Seven Grand yet? It just opened last month with its official debut last Thursday, but mixing whiskey, scotch or bourbon with four flights of dimly lit stairs can’t be good. AND there’s no elevator. I guess that’s one way to ensure that people won’t drive home drunk. 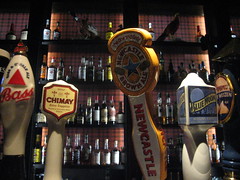 Those crazy steps are just one of the many things I love about this new downtown whiskey bar. Only the tough need apply. Actually if you can’t handle the hard stuff, there are also beers on tap like Chimay and Stella as well as wine for the tenderfoots.

And I’m almost able to forgive it for its $12 specialty cocktails, but, really, where else can you get specialty cocktails made of whiskey? Frou frou cocktails are usually made of rum or vodka. Here you got drinks with names that evoke the millionaire adventurers of yore like Hemingway Daiquiri and Aviation.

And that’s just the sort of image Seven Grand conjures up as it’s decorated like the hunting lodge of an eccentric millionaire with all the things you’d think those guys are into: a pool table, mounted animal heads on the walls, a cigar menu, girls walking around in short plaid skirts and walls of whiskey bottles.

Thursday night’s party was my second visit to the bar since I was able to check it out the week before, and the scene was different for each night. 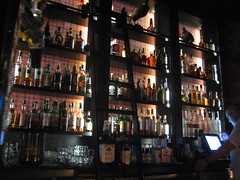 Dre and I showed up to the party a bit before 7. I wanted to get in there early before it got too crazy. To my delight, I ran into Aidan, the general manager of Seven Grand, who gave me the lowdown of the night’s festivities.

He spoke of complimentary cocktails sponsored by Knob Creek, Maker’s Mark and Jim Beam, as well as of a room filled with barbecue eats, live music later and the promise of late-night doughnuts. And then he turned us loose on the scene.

We immediately made our way to the Jackalope room in the back which housed the barbecue sandwiches — basically shredded barbecue-sauced beef between hamburger buns — as well as the mounted heads of the mythical Jackalope deer-rabbit creature. That was it, that was all the food there was for the party, plates of these sandwiches. But it worked somehow cuz isn’t that what eccentric millionaires eat?

Seven Grand doesn’t serve food yet, but they’re working out a deal with Casey’s down the street so patrons can order food and have it delivered just like Broadway Bar does with a nearby pizza joint. There was also mention of one day having a working kitchen downstairs but that won’t be for another year or so.

Waitresses kept coming around with trays of drinks, keeping the growing crowd cocktailed. First up for us was the mint julep — Jim Beam, mint and simple syrup. Twas eh, since it was too sweet and not strong enough. Pass. Fortunately this isn’t something on the regular menu. 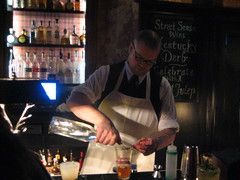 Then I convinced Dre to try the Smash. On my first visit to the bar, bartender Damian Windsor had made it for me saying it was his specialty. And he wasn’t kidding. It isn’t on the regular cocktail list but he said it’s a variation of the bar’s Brock & Co. (bourbon, honey and ginger with lemon and orange juice) except with bitters and lime. We ordered up two each since they were so yum.

I don’t know what Damian does to it but you’d really have to go to him for the perfect Smash. When we just ordered it from the waitress she came back with something undrinkable…. OK, we still drank it but I’ll have you know we didn’t enjoy it.

The crowd the night of the party seemed different from the peeps on the regular Friday night. At the party, we chatted politely with “friends of the owner” who were very well-to-do, mature and serious, well-dressed and would only drink wine and beer. The regular night people were younger and a bit livelier and more casual and took to the list of 125 scotch and Irish and Japanese whiskeys. (Seven Grand has the second largest whiskey offering on the West Coast; first place goes to a bar in San Francisco which has over 200.) 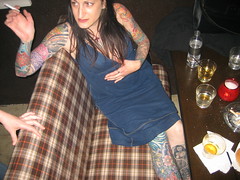 To get in the spirit of things, Dre suggested we smoke out, cigars that is. We bought a couple of the $2 cherry cigarillos and adjourned to the crowded smoking patio where we sobered up and socialized with the friendly tattooed-covered bartenders of neighboring bar, Hank’s Bar.

Since it was a school night we had to leave before the free doughnuts hit the dessert table and just as the live Irish?Scottish? band started their set, but at least we were now sober enough to safely make our descent into darkness.