Experimenting in the Woods Cocktail Lounge 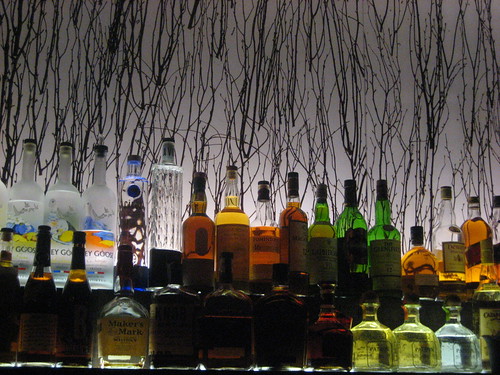 Last night I did something I’ve never done before. I wasted a full glass of Jameson and ginger ale. I know, I know. I’m crying inside. I tried to palm it off on my drinking companions but they, too, already had their fill of cocktails at the Woods. It didn’t help that Jason, the tattooed-covered bartender with appropriately rockstar messy hair, could pour a mean drink.

I had met up with fellow blogger Erin, of Erin’s Kitchen fame, a little after 8 last night at the Woods, Lava Lounge’s replacement in the strip mall on La Brea. It was our blind friend date and it was just as well that we picked this new bar since it was easy to spot her at the bar. She was the only one in the joint.

Together we chatted up Jason and Diamond, the doorman — both were new to the bar. “Everyone here is new,” Jason said. He had a point since it had JUST opened up last week. I’ve never been to the Lava Lounge before but Erin had and she said that this place was much more polished in comparison. Still dark but better decorated. Two dim antler chandeliers hung over a beautiful bar decorated by a white light wall with thin branches stretching over it. 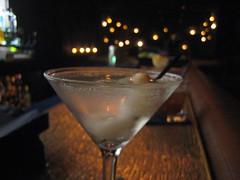 “Do you have a specialty cocktail list?” were my first words to Jason. “We do but we don’t have them printed out yet…and I know how to make two of them. The Lychee Martini ($9?) and the Old-Fashioned,” he replied. Since the Old-Fashioned was basically whiskey poured over muddled maraschino cherries and oranges, I opted for the former which was just lychee juice, lychees speared on a toothpick and vodka of my choosing.

I thought these two cocktails rather odd choices for a woods-themed bar. And then Erin and I got our creative juices going with suggestions for drinks to go with the bar. “You should make a smores cocktail! Or something called ‘mosquito repellant’ or ‘Deet.'” Diamond laughed and suggested “Freshly Caught Trout” after looking at the trout mounted over the back room. Mm. Not so much.

“What would go in a smores cocktail?” Jason wondered, flipping through his copy of The Bartender’s Black Book. And that’s where the fun began. At first he suggested ingredients way too creamy to be good. I said no to Godiva white chocolate liqueur and Starbucks coffee cream liqueur. 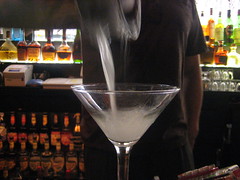 Finally he went with Van Gogh Dutch Chocolate vodka with Frangelico on the bottom and Baileys poured carefully over a maraschino cherry so that it sank to the bottom, too. Unfortunately in the dim bar it looked like a cup of leftover cooking fat. And it was still too creamy. Plus, where’s the graham cracker rim, huh? Jason took a taste of it via a straw and shuddered, “Um, yeah, that tastes great!” It was OK and didn’t taste anything like smores; more like a very creamy chocolate martini. Oh well.

Boasting a rock-heavy jukebox, the Woods lives up to its name by decorating with fake branches and using tables all hewn from a single tree, garnering great admiration from drunken environmentalists/beavers.

As I slowly sipped my way through the cocktail, I got up to investigate the jukebox by the door. Two of my most favorite features in a bar? A photobooth and a jukebox. Yeah, I’m fancy. This jukebox let me have seven songs for $2, a better deal than the Library Bar’s the other night. Since Jason had already programmed 15 songs into the thing, we had to wait some time til my songs came up. I picked a variety to mix things up: Van Halen’s “Panama,” Beastie Boys’ “Sabotage,” Johnny Cash’s “Walk the Line,” to name a few.

Interestingly enough, when my request for Peter, Bjorn and John’s “Young Folks” came on, I found that it totally didn’t match the bar. That go-happy whistling just seemed too light and breezy for such a dark venue, like a child skipping through a Nine Inch Nails concert. 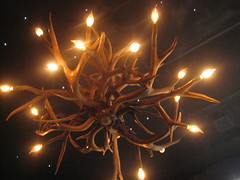 After 10, as is usual for nightspots, people started trickling in. A big group of business folk took up a corner of the lounge and just continued to grow in size, couples filled up the booths, and more bartenders showed up to help Jason out.

Erin was on her third cocktail and her husband, who showed up in the middle of our friend date, was making his way through a very generous pour of Knob Creek neat when I decided on that Jameson and ginger ale. But then I took one sip of it and cringed at how potent it was. Gosh bless Jason for being so generous with the Jameson but I knew that mixing that with an empty stomach was just asking for trouble. So although it broke my heart, I knew what the right thing to do was. I walked away from it.

I know one day I’ll return, though, and order another Jameson and ginger to make up for the lost one. Regardless of the sucky parking situation (there is $4.50 valet, though) and the strip mall locale, I liked this bar. The people were nice, gotta love that jukebox and the vibe of the place. And I definitely have to come back to see if the Smores Cocktail ever made it onto their specialty cocktails list.