Library Bar: Speak in Hushed Tones When You Speak of Beer 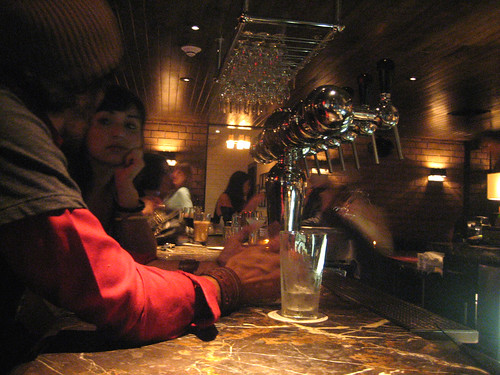 I hate it when I find a really cool bar and it’s so far away from the Westside. That happens a lot. That’s the case with Library Bar. Located in downtown makes it another bar to add to this Westsider’s barhopping dream lineup as it’s near Seven Grand, Golden Gopher and the Broadway Bar. There’s also the Standard Downtown if you’re into that kinda thing.

A Tuesday night after 9 was the perfect time for me to check it out. The low-lit bar was still empty save for the seven people in it, including the bartender, meaning I could chat her up to find out the deal with this place. Michelle, the only one working the bar tonight, was very nice and helpful. Which was great because as I looked at the unmarked taps and then the drink menu, I didn’t know which beer to get. Most of the names on the menu were ones I didn’t recognize since I’m not a big beer connoisseur. Maredsous Dubbel? Three Philosophers Quadrupel? 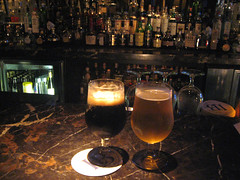 Suddenly I had the weird sensation that I was in a library and couldn’t read. And it’s not like I could have anyway, since it was too dark in this joint to pull any of those decorative books off those pretty shelves lining the walls. But Michelle was here to educate me. “The Stella is sold out?” I noted that the Stella on the list came with a disclaimer saying so.

Immediately Michelle pulled out a glass and tugged on the tap and said that this beer is the closest in taste to Stella. As she handed me the full glass she laughed, “Actually this was meant to be a tasting but I poured too much. You can have this but if you like it I won’t charge you.” M’ok!

One sip told me that this was better than Stella. It was light and very easy to gulp down since it was so yummy. “What is this fake Stella called?” I asked. “It’s not a ‘fake Stella,'” she laughed. “It’s called Spaten Pils.” And then, I don’t know how we got into it but next thing I know she’s pouring something called Craftsman Smoked Black Lager ($6). And OMG is that some good beer. Newcastle and Guinness are some of my fave beers and this fell somewhere in between in taste. Again, easy to gulp down. Too easy.

My friend crazy Andy who met up with me at Library Bar apparently knows all about Craftsman beers saying that they are the best to be had and not many places carry them. (Post edit: Read his interview with Craftsman’s brewer.) “Yeah, Mark at Craftsman called us up and interviewed us to make sure we could carry his beer. He wanted us to be able to sell it,” Michelle said. Suddenly I saw how serious LB takes their beers. They don’t sell Heineken or Miller Light or any such swill. I did see Amstel Light though. 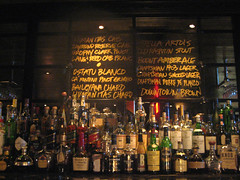 “Yeah, sometimes we get people who come in here and ask for Coors Light.” Must be from the Sheraton down the street. “So I just make suggestions of beers they might like instead. I’m trying to educate them,” Michelle said. “OOH! Do you guys do tastings?” I asked. “I’ve asked the owner about it…” and then she took off to help new customers. At 10:30 the place was starting to get busy. And with only Michelle buzzing around behind the bar, that was the last question I could ask.

Andy and I continued to sip our beers. I then set down my Spaten and Craftsman to go check out the jukebox hidden in the hallway in the back near the restrooms. Odd place to put that but cool because not too many people were privvy to it so I could hog it up. Unfortunately it was kinda pricey: $1 for 2 plays, $2 for 5 and $5 for 15. AND the darn thing was so finicky as to which dollar bill it wanted. I kept trying to feed it the straightest bills and it would just spit it back out at me. Finally I just threw up my hands and fed it quarters instead. Then sat back and enjoyed some Otis, Stevie, Muse, and Run DMC.

Looking around from my perch at the bar, I felt like I had the best seat in the house. Sure, there were the plush sofas around the fireplace filled with candles in the library section, and there was that out-of-the-way back room for smoking opium or whatever it is literary types nowadays are into, and the various armchairs if you just want to sit back with your friend. Dates should sit in that dark back room or cuddle up in the couches around the fireplace. 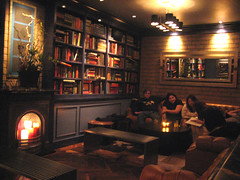 Nearing 11, all the seats were taken up leaving people to just lean on the partition separating the sitting area from the bar. The tall, good-looking doorman ducked behind the bar and turned up the music. But at this point it was “Under the Bridge” by the Chili Peppers which I was quick to tell Andy I wasn’t responsible for.

Suddenly the vibe of the place changed. “Now it doesn’t seem as cool as it used to be,” Andy noted. And when a customer said to Michelle, “No, I want that in a TUMBLER,” Andy’s suspicions were confirmed. We downed the last of our beers and were outta there.

Would I come back? Most definitely, but most likely on off nights. Low-key suits the library vibe of this bar better.