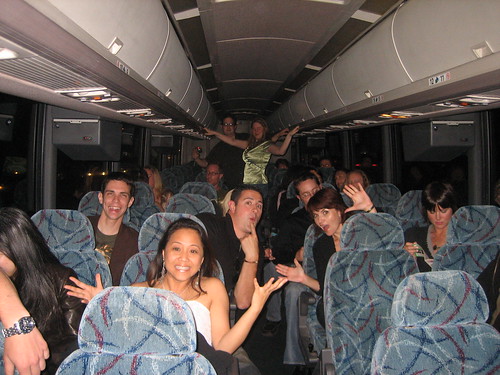 Just in case you wondered, last night’s wine bar bus tour was a blast and I’m not just saying that cuz my name was on the tour. Honestly I was a bit surprised how well it turned out considering it was the first time I’ve ever thrown something like that. L.A. Barhopper’s Brian arranged for a deluxe, plush tour bus instead of the notorious yellow school bus. He also, at my bossy insistence, scheduled a lineup of great wine bars with impressive wine lists instead of just regular ol’ bars for this special tour. So lots of kudos to him for that.

And it was just as well because the would-be tour bus passengers were a more sophisticated bunch than the rowdies on the last barhopper tour I was on. True, some passengers still got a bit wasted (shout out to Dre!) but there was no girl-on-girl action or crazy drunken antics…except for the couple times Brian commandeered the mic on the bus for a unintelligible karaoke performance and Dre threatened to put on a shadow puppet show for us at Fatty’s.

Nope, on this tour we had bread and Spanish and Italian cheeses for everyone between stops and a raffle for that lovely Kangarilla Road Shiraz (congrats to Nancie). True, the journey to each destination took some time (i.e. we had to find a detour to get to 626 Reserve in downtown since 36 blocks were blocked off for Fiesta Broadway preparations) and I couldn’t play the “Meh to Coachella” playlist I worked so hard on for this tour since the bus iPod FM transmitter wasn’t working. But we made due and everyone had fun.

Here’s the rundown of each stop: 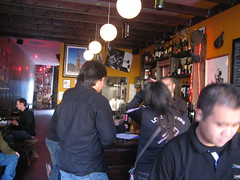 First stop — Bodega De Cordova (L.A.): Basically my first lukewarm review of the place still stands except on this early Saturday evening it was of course busy because of our bus group, who took up the wooden benches nicely. Crackhead and cupcake soul sista Emilia and her friends ordered up the bread and cheese plate. Everyone else jumped into the spirit of the tour by ordering up their glasses of Spanish wine from the small wine list available. Owner Kenny Cordova was on hand to help pour and make suggestions. I was pleased by the number of lovely crackheads arriving for the bus. Everyone was well-dressed and friendly, introducing themselves to me. All were excited about the evening’s festivities. One crackhead gushed about how he was eager to finally find out where he could pick up some good crack. I suggested he try the alleys behind the wine bars.

Usually the first stops of these L.A. Barhopper tours take up the first hour. But since our bus driver was over an hour late, Brian made an impromptu arrangement with Euro-Asian fusion restaurant, Celadon, which was around the corner for us to hang out there until the bus arrived. 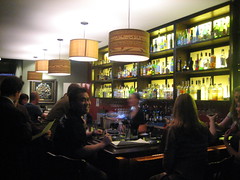 Second stop — Celadon (L.A.): Celadon isn’t a dedicated wine bar but they had a list available. Our group filled up the elegant bar/lounge area, opposite the dining room.

I wasn’t exactly thrilled about this addition to the tour since there was a full bar available which enticed some of the passengers from wine and on to dirty martinis. I myself had to fight the temptation to order something off their unusual cocktail list. Will definitely have to come back another night to check out the Calpico Creamsicle and Green Tea Cheesecake cocktails.

Since we had quite some time before the bus arrived, some people ordered bottles of wine to split with friends. I shared a glass of the Gnarly Head Old Vine Zinfandel ’04 ($8) with my friend Beth for three simple reasons: 1) I love Zin, 2) I didn’t want to get too buzzed just yet and 3) Beth liked its name “Gnarly Head” and kept saying it over and over again with a pirate’s accent. “GnARRly Head.”

My notes on the wine as dictated by Beth and my vino-loving friend Scott: full-bodied, dark, has a lot of alcohol, peppery, nice structure but not a lot of oomph. At least it’s smooth with no tannins. Suffice it to say, I thought it was OK.

As we waited for our bus to arrive, our waitress came over and gushed about the food at Celadon. “Oh my god, the food here is just amazing.” I couldn’t tell if she was sincere or if she was told to say this to us. But apparently, the food is awesome. Tapas average about $15 a plate. You can sit in the bar/lounge and split some tapas with your friends, she suggested. I briefly considered this until I remembered that I thought $15 was way too much for one small plate of food. 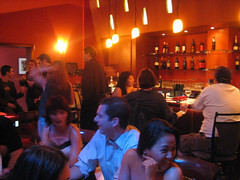 Third stop — 626 Reserve (Downtown): After sitting out the long drive to downtown and around the Fiesta Broadway area, we arrived at this small and empty wine bar. An older woman came outside and greeted us as we entered. Our group instantly took over the venue, filling up the tables and lining the bar.

Hungry wino crackheads kept the kitchen busy with orders for salads, apps and sandwiches. I split a ho-hum chicken panini ($9) with a friend. The sandwich came with carmelized onions and provolone cheese but was still missing that something extra to make it yummy. But later I had a bit of the triple layer chocolate chocolate cake ($6) and THAT was, obviously, YUM.

The wine I split with Beth here was the Malbec Terrazas Reserva 2004 which was $8 for the 5-ounce serving. Notes copied from the menu description: raspberry, red currant, plum, vanilla and caramel. Meatiness and intense crystallized flavor.

626 was all right but didn’t impress me all that much. Why trek all the way downtown when there are better winebars than this on the Westside? 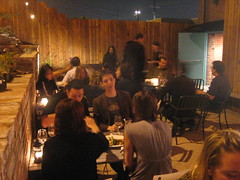 Fourth stop — Fatty’s & Co (Eagle Rock): As an organic restaurant, this seemed an unusual addition to the wine bar lineup but with about several pages of organic wines available it was a refreshing fit.

The restaurant was about to close but they let us take over the outside back patio. With rose bushes, candles and moonlight, it was a romantic setting for our large group. Seemingly insatiable, everyone ordered more food. Blue cheese fondue, chipotle fondue, and the hummus plate with veggies were some of the favorites. I saw someone order what looked like a Bloody Mary with a huge celery stalk sticking out of it.

Beth, Angela and I got our own $15 flights of reds to the envy of Dre who ended up splitting a bottle with some friends. Out of the four wines I tried I only liked the Pinot Noir (2002 Meadowlark, 100% organic from Willamette Valley). I forgot if it was the Petite Syrah or the Cotes du Rhone but something reminded me of horse smell when I took a sip and breathed out through my nose. Nasty. Scott was impressed that Fatty’s had a bottle of some hard-to-find wine, Storybook I think it was called. So he ordered a half bottle for himself.

Service here was slow and scattered but in all fairness, we did arrive when they were closing. But they were accommodating and patient with everything. Although someone had remarked how the manager (?) was stressing her waitstaff out because of us. In any case, at a bit past 11 o’clock things felt like they were winding down. Only one more stop to go. 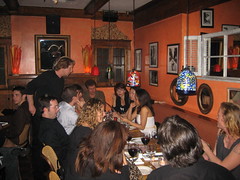 Last stop — Cafe des Artistes (Hollywood): Nearing midnight, this Hollywood French restaurant was closing up its kitchen. However at this point I think we pretty much ate and drank all we could. Some super troopers who had designated drivers and cabs waiting for them ordered up more glasses of wine. I sipped some of Beth’s overpriced glass of champagne ($19). Turns out the price was a mistake as they charged her for the wrong champagne but charged her for the correct amount later. The bubbly was good though.

I loved the room the management set us up in. This front room had a nice homey feel what with its low lights, artwork on the walls and a gas fireplace — a nice place to wind down the evening.

At this point since we were now all friends, most people took up the large communal table sharing in some polite conversation. Others sat in the front smoking patio puffing on cigarettes. Since it was now past the scheduled end time of this tour, a lot of people skipped the return trip to BDC and found other means to get home instead.

A small group of us stuck it out. Who knew that 12:40 on a Saturday night could feel so late? Finally it was time to go home. Surprisingly I was very sober which is just as well since red wine usually gives me the worst hangover.

In the end, I got mixed reviews about the tour. Everyone liked the lineup of wine bars and enjoyed the company but some people complained that it just took so long to get from one place to the other. All I can say to that though is this is L.A. and we love it, sprawl and all.

I don’t know if I would do this again though. I just can’t afford doing something like this without sponsors. Too bad, too, since there are so many more wine bars in L.A. to explore and winos wanting to explore them.