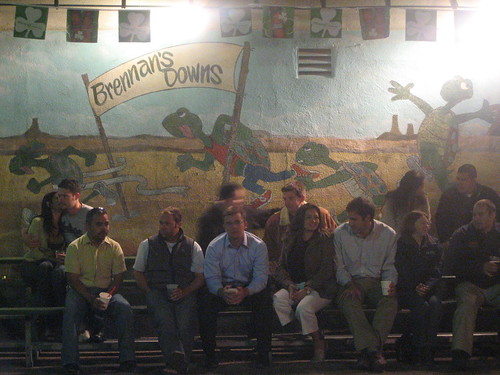 Last night I attended my first ever Guerrilla Gay Bar event. This one took place at Brennan’s Irish Pub in Marina Del Rey on a Thursday night instead of the usual weekend night. Apparently this was a risky switch since lots of people wrote to the GGB HQ complaining the venue was so far from Boys’ Town AND it was an earlier time AND it was on a school night. But isn’t the point supposed to be that it’s DIFFERENT?

Anyway, I myself was curious to see what the turnout was going to be like. My friend and I got there 20 minutes earlier than the suggested start time of 9 because I wanted to scope out the scene before it got too packed.

But it was already sorta packed with a bunch of straights, some of whom were wearing light blue team jerseys. I think they must have been part of a community softball league or something of the like. Everyone was drinking their beers from plastic cups and being quite raucous. Yeah, I said plastic cups. The lights were dimmed really low as if the bar was closing up soon but the crowd’s liveliness showed no signs of letting up. And a band on the darkened stage in the back was in a constant state of tune where they were tuning their instruments for a show that never started. At least not in the time I was there.

We grabbed a couple of seats by the pool tables so I could get a clear shot of the entrance where I anticipated legions of gays to bust on through. As we waited, we perused the impressive selection of beer on tap, which includes my faves Stella and Newcastle. The waitress let us have our credit card back but kept our tab open. That’s pretty cool cuz if you get too plastered you don’t have to worry about leaving your credit card behind. I’m assuming they have a way to just charge it anyway. 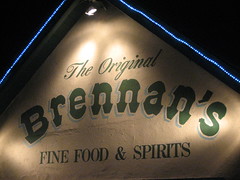 Ten minutes and counting. “I can’t wait til the gays get here!” I said excitedly to my friend. As it was, the scene left much to be desired. At least to me. I didn’t feel any sense of affinity with the Brennan’s patrons. I don’t know what it was. If it was because the lights were too low and I couldn’t see anyone or because of the plastic cups or what. Definitely not my most favorite Irish pub.

A two-man camera crew with a very bright spotlight was going around the room annoying the patrons. No one really knew where they were from but guessed they were there for the turtle races. A short drunk man kept yelling, “The MUH-sheeeeeeeeeeen” to a very tall guy who seemed unfazed by it.

“I can’t wait til the gays get here!” I said again, looking longingly at the entrance. I saw a couple of guys wearing the green shirts the GGB communique had requested but wasn’t sure if they were part of the GGB revolution until I saw them warmly embrace each other. Aww, yay! One of them walked past me and I asked him if he was part of “the guerrilla thing” and he confirmed it. 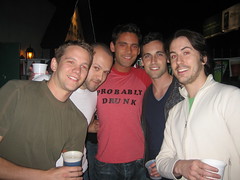 So I excitedly started talking to him and he introduced me to Ryan (pictured far right), who was actually one of the guys who started GGB just last summer. Ryan was very cute and I was instantly smitten. Nice hair! Ryan said he was curious to see what the turnout was going to be like since he had gotten a lot of flack for having the takeover in MDR. But he said that was the point of GGB, trying something new and different. He noted that not every GGB participant was wearing green tonight, though.

I asked if they usually have themes on these nights since photos of their Biltmore takeover showed bar-goers dressing in 1920s costumes. But he said they try not to focus too much on themes since they don’t want to discourage people from coming out to the events. And usually GGB has armbands for attendees to show solidarity but since those are so much trouble to make he didn’t do it for the Brennan’s event.

Since it was now 9:30, we had about an hour til the turtle races began. I enjoyed talking to some more GGBs. When one found out it was my first time at an event he said that he usually likes to take straight girls home if it’s their first time and convert them. “But wouldn’t that mean you’d be converting yourself, too?” I asked. “We’d cancel each other out.”

I don’t know what it was but I really liked the vibe that GGB brought to this straight scene. Oh wait, I know. It was all the cute boys. In any case, I didn’t get to stick around for the turtle races to see how that all turned out, which made me sad, but I definitely want to go to one of these events again. Everyone was so nice and seemed to really enjoy being out here.