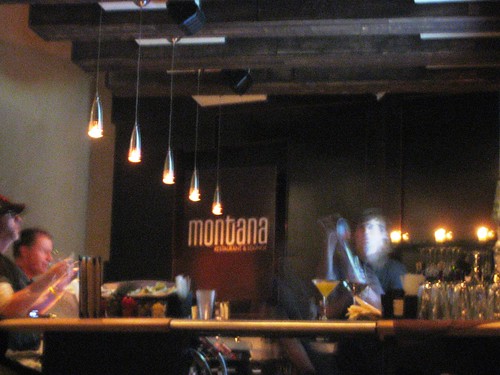 First off, I guess I was unclear in my last post about Montana Lounge. Actually, SBE still owns the space and is using it until the Hillston Restaurant Group takes over and turns it into Cafe R&D. SBE is just keeping the liquor license active. This is all according to an insider source. She said that the uniforms are from Area and the menu is loosely borrowed from Hyde.

Anyway, I was finally able to check it out in person last night with Dre and my insider friend, who I’ll call “Jane.” I was expecting to see it in a state of disarray with makeshift furniture since it’s supposedly temporary until it becomes a chain restaurant. But instead of mismatched chairs and waitresses wearing their own clothes, it was a well-put-together venue. There was a sign and everything. And the waitresses were wearing matching uniforms of a black-and-white mod nature. Very short skirts with, fortunately, shorts underneath. I guess I shouldn’t expect any less from an SBE production.

Apparently there’s a happy hour from 4:30 to 7:30 on weekdays but that just means $1 off their $12 cocktails. When I asked one of the waitresses what the happy hour special was on food since it said there was one on a card by the bar, she said, “I really don’t know.” Oh well, I’m sure it wouldn’t have been too much of a discount anyway in a place like this for a cheapskate like me.

At a bit before 8pm, the place was busy but still offered some seating. We plopped down on a cushy beige microsuede couch in the middle of the main room. The manager came over and talked to Jane about how earlier a guy claiming to be Jimmy Page’s son wanted to know if he could invite his friends over and take over the sound system with his playlist.

Looking around, I could see why this place would attract such people. It was fancy. The crowd was older (30s to 40s) and oozed success. Later Jane invited a baseball-cap-wearing Japanese man who just walked in, and whom everyone was kowtowing to, to join us. “Who’s that?” I whispered…loudly since that Huey Lewis song was playing pretty loud. “That’s Katsuya-san,” she replied. “As in ‘my name is on the restaurant.'” Oh. Kay. He didn’t stay long which is just as well because I wouldn’t know what to say. 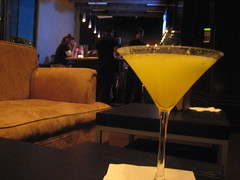 But I wanted a drink now and ordered up the Burning Mango martini — mango vodka, slivers of jalapeno, lemon and orange juice and a dash of peach bitters served in a sugar-rimmed martini glass. Suffice it to say it was gooood. It wasn’t too spicy like Ford’s Burning Man where my throat was set on fire but spicy enough to give it a kick and make my mouth water. I had to make sure I didn’t suck it down too fast in my enthusiasm.

I kept asking Jane how long this place was going to be around for since I still couldn’t believe that it was not long for this world but never got a concrete answer. They’re going to make this into a coffeehouse? Such a shame since Montana could use a venue like this.

When 9pm hit, the place started to really get busy. All the seats were taken, including a spot in the back corner that had been cleared for a private party. Lots of men here, groups of them, well-dressed with their buttoned shirts and trousers, looking around. Suddenly I felt underdressed wearing Converse to a swank joint like this. “That guy over there is wearing Converse, too,” Dre said. “It’s not the same thing.” Most of the girls here were wearing something sexxxy. But I was over it in a second.

Some of the 40-something couples took advantage of corner tables and made out in the dim room which was made even noticeably dimmer after 9. The music, though, was awful. I loved the ’80s but more new wave, not Solid Gold fare. I guess it’s meant to appeal to this clientele?

So I enjoyed the lounge for what it is and can appreciate how it would most definitely fill a niche on this wine-and-beer stretch of Montana but it just wasn’t for me. I’m just not fancy or old enough.