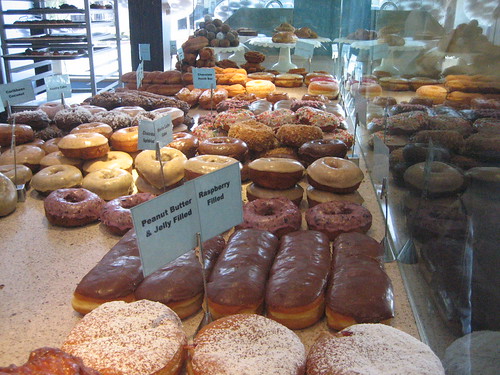 What’s a good doughnut supposed to taste like? I thought that Frittelli’s Doughnuts & Coffee in Beverly Hills — self-proclaimed “Best Doughnuts in L.A.” — would be able to tell me but I was disappointingly wrong. Ever since I first heard about their designer doughnuts, way back when I had gone on a brief hiatus from cupcakes, I was intrigued by their variety of tasty treats and fancy beverages. Their online menu boasted fritters and crullers as well as cake, mocha cake, honey wheat and buttermilk doughnuts. And I wanted to try their California Vanilla-Almond Caffe Latte with Madagascar and Tahitian Vanilla. My my!

My first attempt to visit was thwarted by dang-blasted Easter as the shop was closed for the holiday so instead I had to take a loonnng lunch today to trek all the way to Beverly Hills for these fancy pastries. 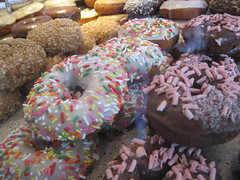 After circling the block several times, a metered spot finally opened up with 8 minutes already on it. Score! At a little past noon on a weekday, the place was empty. But then again, who wants to eat doughnuts for lunch? The woman behind the counter was helpful and so patient as I took a bunch of pictures while deciding what I wanted to get. Finally I settled on the vanilla cake doughnut…the mocha latte doughnut…and the lemon poppyseed (which was for dotsara, I swear). All were $1.50 each, a way cheaper sugar fix than Sprinkles down the street. The vanilla-almond latte ($2.90) rounded out my order.

My friend Erin ordered the peanut butter and jelly-filled doughnut but not before asking if it was for kids. That’s cute. The guy who took over helping us said that he eats them all the time. I wonder if that’s true. Wouldn’t you get sick of it?

After our doughnuts were bagged (there are fancy carryout boxes in shiny blue for bigger orders) we hurried back to work. 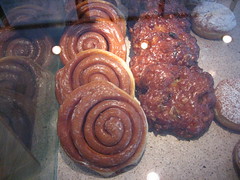 When the 3 o’clock crash hit, I broke open the mocha latte doughnut at my desk. I remembered that the woman at the shop had said that this doughnut just like the vanilla latte cake one except with a darker cake. It looked pretty tasty, like any other doughnut. But when I bit into it I was so disappointed. It wasn’t sweet at all. The cake was dry and almost bitter but not in a dark chocolate way. The icing was OK, I guess. It was sugary so that balanced out the taste a bit. I’m thinking they created the doughnuts this way to be consumed with coffee since they are so dry.

Dotsara took a bite out of her lemon poppyseed cake doughnut and shrugged. “It’s OK,” she said and took the rest back to her desk. Later she IM’d me her review: “It would be a good breakfasty snack, weird for afternoon. It’s all…grown-up. That’s the problem! It’s not sugary enough.” With regard to my mocha latte doughnut, I have to agree. But my vanilla doughnut told a completely different story. The icing was sweet and the cake moist. I liked it wayy better than the chocolate one. Imagine that. 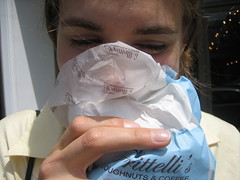 Erin enjoyed her PB&J filled treat, though, saying that the jelly was like “real jelly with seeds and everything.” But she also noted that there wasn’t any glaze on the doughnut itself. Again, I assume it’s because that would have made it too sweet.

BTW, that vanilla-almond latte was very, um, flavorful. Again it gave the impression of sweet but in the end it wasn’t. It was very rich. Maybe good for a postmeal drink but not something I’d have with a doughnut.

So I basically I felt a bit let down here in that that yummy-sounding latte didn’t blow me away as much as its description did. And the mocha doughnut? Blech. However the plainest-sounding treat, the vanilla cake, was actually the best of the bunch. I guess the lesson here at Frittelli’s is stick to what’s simple.