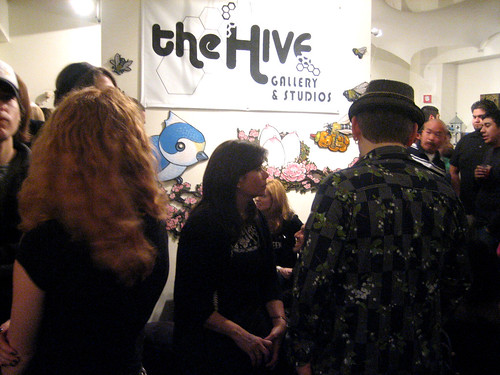 After about half an hour at Edison, Andy and I took off for the Hive Gallery’s 2nd anniversary party. I knew nothing about it except that there was art, food, drinks, music, it has apparently been around for two years and this exhibit runs through April 29. Suggested cover was $7 but, hey, it was in support of the arts. It was something different and I was looking forward to it.

Fortunately, Andy was driving. I say fortunately because that meant he had to contend with parking. And anyone who knows me knows that I have no patience whatsoever when it comes to looking for parking. Things would be easier if I believed in paying for parking, but I don’t.

Anyway, apparently neither does Andy since for most of the night for almost every bar we went to, he’d just park his Civic in the fire lane and leave it there. “You can’t do that!” I’d tell him but he assured me that parking people would just look at his old Civic, decide that he was one of their peeps and leave his car alone. He warned me that if I didn’t believe that everything was going to be OK that I’d jinx his parking luck.

Of course he didn’t pull up to any ol’ red curb but ones that extended from metered spots so his tiny car would almost blend in with the line of legitimately parked cars. The secret, he says, is to have a small, forgettable car that won’t catch the parking person’s eye, and to have the balls to do it. Now of course I’m not condoning this. All I’m saying is that Andy never got a ticket. We laughed off the $10 lots and the packed downtown street parking and made our own parking spots. It was liberating and it saved time.

So we slotted in front of some metered parking spots just steps away from the gallery entrance. The party was in full swing with the rooms packed in with artsy hipsters. A bikini clad girl wearing big sunglasses, an even bigger fro and strategically placed stuffed animals on her body greeted us and told us that it was $7 to get in. After we paid she asked, “What kind of bees make milk?” After wracking our brains for all of a second for the possible answer, we shrugged. “BOO-bees!” she laughed. But of course! Why didn’t I see that?

Anyhoo, we pushed our way through the crowd to the back of the gallery. Lots of art covered the walls but I found myself staring at people more than the works themselves.

Two girls wearing deelyboppers and playing keyboards in the middle of the gallery provided the tunes. A girl who reminded me of Amy Winehouse sat forlornly in a loft above the gallery, not even smiling when I took her picture. One of the artists set out a plate of yummy chocolate chip cookies for the gallery goers.

When we finally reached the back of the space, there was a long line of people at the makeshift bar. A looong, nonmoving line. The menu at the bar listed $5 cocktails, beer and fish and chips.

Andy and I made one more pass through the gallery. I encountered an interesting-looking girl who looked like a punk fairy, wearing a pink long-haired wig and lots of colorful makeup. Andy asked her something to which she replied, “I like cute things.” She kindly let me take a picture of her. After that we were outta there.

Next up was the Hyperion Tavern. After finding out that they have Guitar Hero Tournaments on Wednesday nights, I fell in love with the place. That’s genius! And I’ve been trying for ages to muster the energy on hump days to check it out but 10pm in the middle of the week felt like an impossibility. Andy had never been here either so we were both excited about it. Once again he did his fire lane parking move and we walked up to the unmarked building on Hyperion Avenue.

Even the door to the place didn’t offer any clue to what we were in for as it was covered with a black vinyl sheet. I pushed it aside to find myself standing in a very small, dark space. Taking our seats at the bar by the door we didn’t see any signs of liquor in the joint except for a chalkboard listing beers. I tried to peer behind the counter to see if I could find any liquor bottles. Andy and I exchanged confused looks before we asked the bartender if they served liquor. “No, just beer,” she said matter-of-factly. She waited a bit for us to order but after we exchanged one more confused look with one another she went away. “Did you wanna drink beer?” I asked Andy. “No. I don’t want beer yet.” “OK, I’ll use the restroom and then we’re out of here.”

How disappointing! I’m sure this place is great for those who want nothing but beer but we were on the hunt for cocktails and wtf was this? PLUS cash only. I guess it’s just a no-frills bar. Just have no expectations and you’ll be fine.

Next! At this point we were ready for something good and familiar again so we made our way to Cha Cha Lounge. Ever since I went there I’ve been trying to find my way back. Such a fun bar. But I could never figure out how to get there. Fortunately Andy showed me the way. And this time he actually found a legitimate parking spot behind the bar. Apparently most people assume there’s no parking back there and don’t even bother looking first. True, there aren’t that many spots but it’s always worth a look-see before heading to the hills. 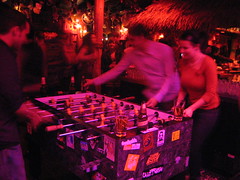 Once parked, we tried to walk right through the door but a doorman stopped us and said that the three people standing behind a rope back by the parking lot entrance — not a velvet rope mind you, just a rope — were ahead of us. Inside I could hear the bass line for Hall & Oates’ “I Can’t Go for That” playing. Yes, I was standing in line to get into a bar playing H2O. “If there’s only 20 people in there, I’m going to be sooo mad!” I whined. Fortunately they let us in after about 10 minutes.

Inside was packed with young folk but we didn’t have to wait too long to order up a drink or find a place to sit down. My friend Val and her date du noir met up with us and we were able to grab an actual table. The face of some heavily made-up woman was painted on it. I think Andy said that they put the faces of famous transvestites on their tables but I can’t be sure. At this point I had quite a few.

Since it was now midnight and I didn’t feel like drinking anymore, I decided to call it a night and bid everyone adieu. I had so much fun in my exploration of the Eastside. There’s definitely more to see and another Eastside barhopping trip in my near future.