Speed Barhopping on the Eastsiiide, Part I 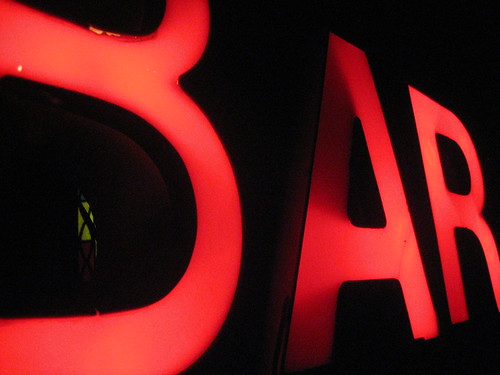 Last night I met up with Andy from LAist, or as I like to call him “Crazy Andy” — you’d have to know him to understand — for some Eastside barhopping action. The mission? Go where I’ve never gone before and revisit new faves since I rarely get to go to this part of town. I wanted to start early though so we could fit in as many bars as possible. We had a loose itinerary: Short Stop, Hyperion Tavern, The Hive Gallery 2nd anniversary party, Cha Cha Lounge and 4100.

First stop, Short Stop in Echo Park at 8. I had gone here ages ago but it seemed like a totally different bar from that time since instead of it being packed with hipsters dancing to loud music and playing pool and pinball, this early the joint was empty save for the few patrons at the bar and the vibe was obviously way more mellow. Andy and I just had a quick cocktail before he took me on a brief of a tour of the place. He comes here a lot since he lives nearby.

I hadn’t realized that one room was the dance room since when I saw it last it was just packed with people who weren’t dancing but mingling. Seeing it empty, there was the disco ball, the dj stand and black booths lining the walls. Andy said how they usually play good music here. I think he said ’80s type stuff. Out back was a room lined with glass cases filled with a variety of beer cans I’ve never heard of and through the back door, the smoking patio. “I never knew how nice it was back here since it’s usually filled with people smoking,” Andy said of the small alley which sported a “Keep quiet for neighbors” type sign.

I looove the Short Stop and really wish there was something like it on the Westside. It’s just cool how it has something for everyone what with the dancing, arcade game, pool table AND my fave, the bar photobooth, and it’s pretty laidback yet young and hip.

Next up was downtown’s Hive art gallery which was celebrating its 2nd anniversary. But on our way there we got held up by pirates. “Have you ever been to Redwood?” Andy asked. “No, but it sounds familiar for some reason.” “It’s the pirate bar!” he exclaimed. Then I remembered how Stephy of Yelp had held a Yelp gettogether here once and I had to miss it. How can I pass up the pirate bar? Unfortunately the Redwood Bar & Grill wasn’t what I had expected. No full-on pirate theme with Jolly Roger flags, pirate bartenders, and booty. Instead it was simply a nautical theme bar/restaurant with some hanging fish nets. The booths weren’t covered in black leather but white and seemed almost prissy. Not exactly “Arrrrrrgg!”

A quick glance at the menu revealed pricey food items like an $8 grilled cheese sandwich and $12 burger. A chalkboard near the bar listed as a drink special “Walk the plank, 6 shots and 7th free.” But that, apart from the skull and crossbones over the bar, seemed to be the only pirate-related items. I guess I was expecting it to be a tad bit grungy being the pirate bar and all, but instead it was, well, clean and decorated old people-friendly.

The crowd this night consisted of people in their 40s and up. What happened here? Where were the hipsters toasting their rum-filled drinks? Maybe that’s for later on in the evening. Since it was a little before 9, maybe it was too early for pirate debauchery. Still, unimpressed, I told Andy, “Let’s go to Edison.” 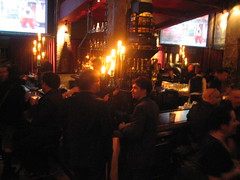 Ever since I heard about Edison back in November, I’ve wanted to check it out. But the old excuse about it being too far away to be included in a night of drinking kept me away. I know, stupid reason. And walking into this lovely downtown bar for the first time I regretted staying away so long. It’s simply GORgeous! And huuge! Since it was still early, there wasn’t a line outside and we were able to breeze in save for Andy being asked nicely by the doorman to button up his shirt. “Upscale attire required.” Even the bar’s site has a section detailing all this: “No torn or baggy jeans. No athletic wear. No baseball caps…”

Andy and I descended the staircase and were able to get a good overhead view of this basement bar. Lots of young and prettily dressed people lounging on plush couches, standing along the dark wood bars, sitting in leather armchairs and canoodling in leather booths. The high ceilings gave this place an airy feel.

We toured this exquisite scene. Old generators and dim old-fashioned-looking bulbs and an art deco decor made me feel like I was in a 1920s bar scene. We found the prime people-watching seat in a booth near the bar which overlooked everything, including an empty stage. “This seat is too good to be true. I wonder if they’ll kick us out?” I asked aloud. No sooner had I said that when a waitress came up to us telling us that the booth was in fact reserved later but that we didn’t have to leave just yet. She was nice about it, no attitude at all. So we assured her that we were planning to leave shortly anyway since we had to get to the Hive party. 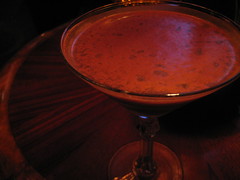 But first, our drinks. I had perused the cocktail menu many times on Edison’s site, and longed for their old school drinks. But here now, the Scharffen Berger Napoleon called to me. “The best chocolate martini you’ve ever had…assuming, of course, your high-end taste” read the menu. H’well! I sucked up the $14 price tag and ordered it up. Made with vanilla vodka, mandarin orange vodka and chocolate liqueur, the drink was rich but not too sweet, like a real dark chocolate bar.

“You mean there’s no garnish?” Andy asked the bartender who didn’t really answer him. That was odd for something that’s supposed to be the best chocolate martini ever. Shouldn’t it be a feast for the senses? Regardless, it was really yummy. It wasn’t overly creamy and it was potent.

I wish I could have ordered another but our time was up and we had to move on to the next place. I definitely have to come back though so I can do a more in-depth review. At least I know the best time to get here on a Saturday night is around 9. Find a prime spot, set up camp and nurse the hell out of those expensive cocktails. BTW $8 for an Amstel Light. Just sayin’. I’d like to see what the scene is like later in the evening with music playing and more people. Will the doormen get surly, the waitresses and bartenders impatient, the crowd snooty? As it was, I loved it.

Next up, Part II: The Hive art gallery party, Hyperion Tavern and the secret to parking in downtown L.A….