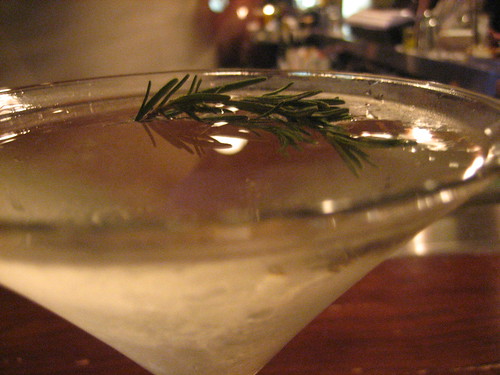 Remember the advent of the cosmo and how suddenly a slew of sweet “martinis” popped up at posh bars and restaurants everywhere? Well I guess the “martini” cocktail has metamorphosed yet again with the arrival of what I’m calling spice rack martinis: cocktails that use unusual-for-a-cocktail taste enhancers other than sugar and chocolate powder. The first hint I got that times were a-changin’ was when I tasted that Burning Mandarin at Katsuya.

At Ford’s, Thomas, of the dynamic bartending duo “Steve and Thomas,” fixed me up a slew of cocktails. But the ones that stood out were the Rosemary Pear Cocktail ($10) and the Grapefruit Basil Cocktail ($10).

Pearadis at Eleven. I think pear vodka is my new favorite flavored vodka. So light and perfect for spring. Unfortunately I have to say that I wasn’t all that awed by the pear drink at Ford’s. I know! Just when I thought my boys could do me no wrong. Well, actually it’s not that they screwed up the drink since it seems to basically consist of a martini glass full of pear vodka and a lone spring of rosemary. It’s just that I wasn’t crazy about the taste combination. It might have something to do with the fact that I didn’t immediately down it. I let it sit there as I chatted, ate from a cheese plate and took pictures, and the rosemary flavor infused the pear flavor and it ended up tasting a bit…medicinal. Yeah.

With the Grapefruit Basil Cocktail, Thomas set this cocktail garnished with a big ol’ basil leaf in front of me even though I hadn’t ordered it. And when he told me what it was, I had to hold back a grimace. I. Hate. Grapefruit. And basil? Sure, it’s good in marinara sauce but with liquor? However, since I’m not one to turn down a cocktail, I took a tentative sip and was rewarded with something unusual. Why, it didn’t taste like grapefruit at all, but it sure did taste basil-y. It was fruity though and yet not too citrusy or tart. I hate tart. It wasn’t my most favorite cocktail but it was something different, and I loved it for that. Dre and her friend took turns sipping it, too, relishing its novelty. “Weirrd, basil.”

As I sat and sipped it, a couple standing nearby asked me what it was. They liked the looks of that big ol’ basil leaf, I guess. When I told them, they were surprised. “I don’t like grapefruit but this tastes pretty good…different,” I told them and I guess that was good enough for them since they ordered one up. Hopefully they liked it, too.