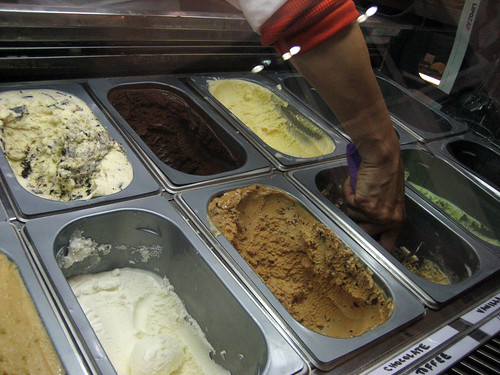 After Bodega De Cordova, I dropped by Milk on Beverly Boulevard, known for its ice cream, ice cream bars, ice cream bonbons and ice cream sandwiches. I didn’t realize how wonderful a place this really was until I was standing in front of the freezer case licking the glass that was separating me from the ice cream goodies.

Unfortunately since I actually was full from my meat and cheese plate at Bodega, I really only had room in my stomach for half a scoop of hazelnut crunch and half a scoop of banana dulce de leche (both enthusiastically recommended by the ice cream pusher). Made me sad since in addition to all the ice cream desserts there was also a bunch of yummy and unusual pastries like blue velvet cake made of blueberry puree with candied blueberries and white chocolate frosting. So blue. Ohyeahandthere’sregularfoodheretoo.

After I spyed a big bottle of Jack Daniels on a shelf in the kitchen, I asked the chef what it was for. “Sometimes we like to drink,” he said straightfaced. “That’s what I thought!” I replied. Then he said the most wonderful thing I ever heard: “Actually that’s going to go in the sauce for a double chocolate croissant pudding that we’re making tomorrow.”

And that’s why I returned to Milk yesterday. Even though I had dinner at BLD, I just had to go back for that croissant pudding ($4) AND, oh yes, the coffee toffee ice cream sandwich ($2.50).

I had them pack the pudding to-go and, since the dessert comes with a scoop of vanilla ice cream, they put that in a carton for me, too. Mmm, I’ll nuke the pudding later and drop the ice cream on top so it’ll be all nice and melty.

But at the store, I plopped myself on a not-too-comfortable metal chair and enjoyed the coffee toffee sandwich. Twas perfect. The best ice cream sandwich EVER, including homemade ones I used to make.

The cookies sandwiching the ice cream weren’t overly sweet and didn’t overpower the coffee toffee ice cream. And they weren’t too soft where they would fall apart but still so moist.

My friend, who was initially shocked by my insatiable appetite for ice cream and my appetite in general, caved — after watching me lick my fingers and make “mmmm!” noises — and asked if he could have a bite of my sandwich. I had to resist the temptation to clutch the sandwich to my chest and glare at him, “Get your own! It’s my preciousssss.” Instead I begrudgingly let him help me finish it.

But why oh why does this yummy magical ice cream parlor have to be soo far away from West L.A. and why does the street parking situation around it have to suck so bad? I guess the harder you work for something the sweeter it will taste. I am so going to be a regular here despite the long lines that are sure to form come 80-degree temperatures. And I can tell you right now that Milk will not do this body good.