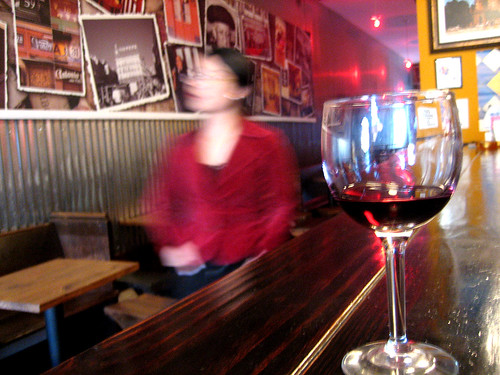 The first time I heard about Bodega De Cordova, an Internet date had suggested we meet there for our first date. I thought this was kind of rude of him since this small Spanish wine bar is clear across town for me and only down the street from his place. Hm, on second thought, I guess he knew what he was doing. Suffice it to say, I ended up not meeting him. But eons later here I was finally checking the place out. It came up again in my life because this is where the Caroline on Crack Wine Bar Bus Tour will kick off so I figured I should check it out. 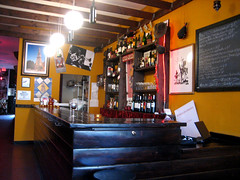 I brought my friend Bernadette, who loves all things Spanish, since I figured this was a place she’d appreciate…even though she doesn’t drink wine. We got there around 6:30 after work and it was completely empty save for the guy behind the bar.

Since it looked so small and narrow, I was glad that we came during an off time because we had our pick of places to sit. Forgoing the wooden benches along the long hallway, we chose the red velvet-covered bench near the burgundy curtain-draped window overlooking Fairfax. I think from now on I’ll only go to places during off times because I like being able to talk to the workers and explore my options unhurried.

Here I asked the guy which wine he recommended to someone who likes smooth full-bodied reds. For some reason, I thought he’d only point to a bottle since he seemed kind of quiet but to my delight he set out two wine glasses, pulled a bottle from the shelf and poured a bit for us to taste. Still, not very talkative that one. I had to go through three bottles til I found one I liked. Wink, wink. I ferget what I finally settled on (it started with a “C” and cost about $7) but it went well with the meat and cheese plate ($10 and $8, respectively) we ordered. BTW, cash only here. If you forget, there’s an ATM in the back.

The place has such an endearing vibe, it’s easy to spend a couple of hours nursing a bottle of Rioja or trying glasses of wines from some of the promising new wine regions in Spain. With scarcely 15 wines on offer at the moment, you don’t get a comprehensive view of the Spanish wine scene, but the idea is to change the selection frequently and concentrate on lesser-known Spanish wines.

Bernadette wondered allowed if the owner of the bar, Kenny Cordova, was from Spain since this bodega evoked memories of her vacation in Barcelona. But surprisingly the guy said the owner was from Puerto Rico. “Really?” Bern and I squeaked in unison. Who would have thunk? 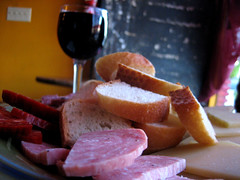 Our small meal of meat, hard cheeses and bread was more than enough for just the two of us and we barely finished it. But I was kinda disappointed that the only two cheeses we were given were hard. Not that they were bad, I just love soft cheeses.

If you’re looking for an actual entree here, you’re SOL as cheese, meat and marinated olives imported from Spain are all they serve even though there appears to be a small kitchen in the back. I found this odd, since the sign out front says “Vino y Tapas” but I guess technically “tapas” can mean anything. Here, it means a plate of cold proscuitto, fancy bolognie and salami or two types of hard cheeses.

Bernadette and I continued our chat while enjoying the slightly loud music filling the empty bodega. Even though it was now past 7 we were still the only patrons here this Tuesday night. I wonder what it’s like on the weekend? Apparently there’s live music on Friday and Saturday nights.

The place was quaint but I don’t know if I’d trek all the way across town for it what with better wine bars on the Westside which have more extensive wine lists and more food to choose from. Ah well. But I will see it again for the wine tour.