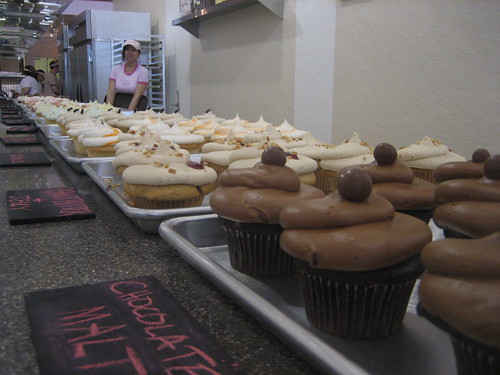 Although I haven’t quite recovered from that Cupcake Challenge earlier this month (and you’re probably sick of hearing me blab about cupcakes), I had to check out the new Santa Monica location of Yummy Cupcakes. Since the original store is all the way in Burbank, I had resigned myself to pining for the Elvis cupcakes long distance. Now with a new Westside location, I have another reason to up my cardio at the gym…once my cupcake craving returns, that is. Located just off the 3rd Street Promenade and next door to Sur La Table, Yummy doesn’t have a storefront sign yet but you can’t miss those cupcakes near the window. 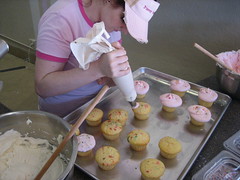 My friend John and I ducked in at lunchtime and there wasn’t anyone in the store but there were a bunch of workers in back. One girl was applying pink frosting to the “Happy Day Cupcakes” and let me take her picture.

The other girl who took our order didn’t seem very knowledgeable about the store. I asked her if the Elvis cupcake (peanut butter cupcake with chocolate/banana buttercream) was only a special order item and she shrugged and mumble-repeated what I asked except as a statement. Okayyy.

However, when John shied away from the piled-high frosting on the cakes, the girl came to life and suggested he try the Fudge Yummy Cupcake ($3) which just had one of the thinnest layers of frosting on it, aka a normal amount of frosting. “People who don’t like that much frosting usually buy this one,” she explained. Looking at the selection, I could see why. All the cupcakes looked like they were topped with meringue when really it was all buttercream. Apparently there are die-hard frosting fiends out there since there’s also a listing on the menu for a spoonful of frosting. Ew. 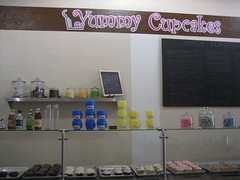 There are about 11 standard flavors to choose from (about $2.50 each) and then four specials of the day ($3 each). You can check the Yummy site for the daily menu. Today’s was Chocolate Malt, Creamsicle, Irish Coffee and PB&J. I ordered up the St. Paddy’s Day leftover special, Irish Coffee ($3). They said it was made with a shot of Irish Cream so I wasn’t about to turn that down. This cake was topped with coffee-colored, meringue-looking frosting which was firm to the touch and a chocolate espresso bean.

They didn’t box our purchases but rather gave us our own brown paper bags. If you want to protect your frosting, you can opt for the special cupcake container (“Cup-a-cake,” $2.50) they sell but I ain’t that fancy. However, I was a little sad when I got back to my desk and found that my frosting had since softened and was mooshed during transport.

Just as well, cuz when I tore into it and took that first bite…blech. The cake had a weird texture and was dry and spongy as well as oh-so flavorless. WTF? The frosting was actually pretty good but with so much of it I found myself wiping some off with a napkin. Too. Much. Sugar. Suffice it to say that my favorite part of the Irish Coffee Cupcake was the chocolate espresso bean.

John liked his cupcake, though, and said, “Good fix for a chocoholic like me and the frosting was light.” I complained, “Mine sucked! It was flavorless and that frosting? Blech.” He thought this was a pretty harsh assessment about “such a happy dessert.” Anyhoo, maybe I was just mean because I’m still not ready for cupcakes or maybe I have high standards now. You try it out and let me know what you think.