The Ghetto Gourmet: Adventures in Eating 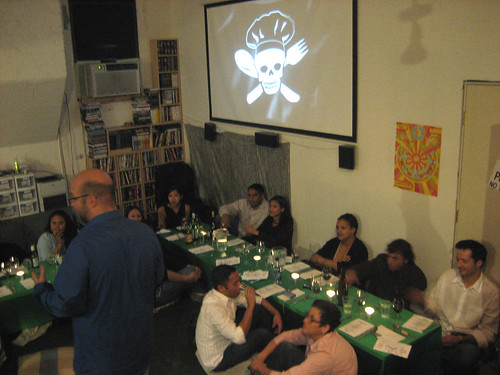 I learned a lot about myself tonight. That I can sit next to a bunch of strangers at dinner and find something to talk about. That I regard myself as “shadowy” and “cool” and my friends as “time bandits” with “tiny hands.” And that I can actually enjoy a meal of roasted rabbit. Thus was my night at a Ghetto Gourmet dinner in a Little Tokyo loft where I sat down to a four-course meal with 30 other Angelenos.

It was fabulous. In Los Angeles, you’d think that this Bay Area improvisational dining concept would have some difficulty 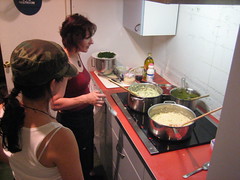 appealing to those who really only deal with one another from behind the wheel on a daily basis. But our host Jeremy Townsend says that those who attend these dinners are usually the same types of people in every city the Ghet goes to: the adventurous types. And looking around the room at this intimate group of 20-30somethings, I saw what he meant.

Every table of thrown-together strangers was in the midst of conversation and wine sharing. In fact, I usually reserve my conversing for the cocktail hour but at my table everyone was so friendly it wasn’t hard at all to get their stories. An EMI accountant, a couple of UCLA students and the owners of the loft where we were presently dining were my dinner companions tonight. And with every course we shared our amateur foodie reviews with one another. 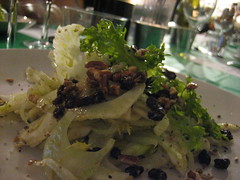 Some thought the Ajo Blanco gazpacho with jamon grape brochettes a bit too much for the opening course as it was so savory. Everyone, especially my friend Lillian, luuuved the salad of shaved fennel, frisee with pecans and currants and a coriander vinaigrette. Lil even asked the chef, Cynthia Washburn, for her recipe after dinner and then gave her a hug.

For the entree we had, gasp!, roasted rabbit with sauce verte over morel risotto. I was so timid about this when I first got the menu this morning but had to try it anyway. It wasn’t as gamey as everyone said it was, and yet it didn’t taste like chicken. Fortunately, my portion didn’t have enough meat on it, lots of bone. When I was done I sat back, looked down at my plate and realized that I could actually imagine how the rabbit used its widdle paws to clean its long ears, like my childhood pet rabbit did. I started tearing up. Lillian and dotsara laughed at me and yelled, “Don’t think about it!”

Chef Cynthia said that this was probably the first time a lot of people here tonight ate rabbit. Although I liked the spiciness of the sauce verte on the rabbit and loved the risotto around it, I don’t think I can bring myself to eat that particular furry woodland creature again.

Between meals we enjoyed a four-minute dance video which was choreographed and edited by Jeremy’s fiancee/wife Mary Alice White, as well as a little game of “imagine yourself in a forest.” This game was in lieu of a violinist who had canceled his performance tonight last minute. Just as well since I love those psychological games where my description of the forest is how I describe myself and the band of midgets I encounter and describe are how I regard my friends. Heh.

Anyhoo, intrigued by how this all came together, I found out from our loft hosts, Josh and Damaris, that they discovered the Ghet dinner hosting opportunity through Gigsville. And since the couple has this huge space (just down the street from Little Pedro’s) and rarely any guests, let alone gourmet meals cooked there, this was a perfect fit for them.

Jeremy said that it’s easy to get people to host the impromptu dinners since the Ghet is usually in at 4pm to set up and out by midnight. The number of guests obviously depends on the space involved, so anywhere from 15 to 40 people max attend these events which are growing in popularity as they travel from city to city.

As I took a swig of my BYOB of Stella, fidgeted a little bit on my floor pillow and looked around at my fellow Angelenos dining here tonight, I realized this is one of those moments when I really love living in this city.

If you want to join strangers for dinner, there’s an upcoming Ghet dinner ($45) at the Brewery this Saturday.