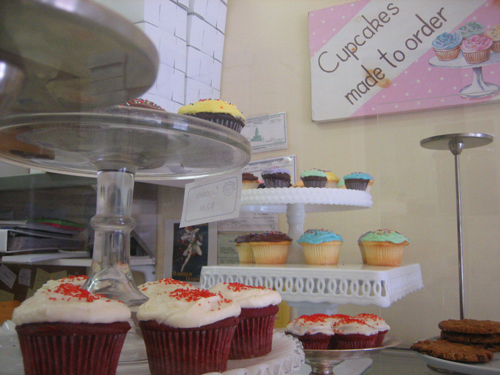 I decided to undertake an ambitious task: eat cupcakes from six of L.A.’s best cupcake stores in one sitting to find out which is the bestest of the bunch. So I enlisted the help of five cupcake-crazy friends for this special taste test. We had to retrieve a red velvet cupcake, a chocolate cupcake and a wild card flavor from the following stores: Auntie Em’s in Eagle Rock, Buttercake Bakery in West L.A., Hotcakes Bakes in Mar Vista, Lucky Devil’s in Hollywood, Sprinkles in Beverly Hills and SusieCakes in Brentwood. I had many more cupcake places on the list to choose from but either they didn’t have red velvet, they got bad reviews or they weren’t located near any of my taste testers. This was just as well since more cupcakes would have been bad considering that we could barely make it through the batches that we had.

I’ll go through each contender each day this week and in the end reveal our results which we reached in a not-very-scientific manner.

Qualifications: 1) The test was my idea, 2) I have an insatiable sweet tooth, 3) I made the best red velvet cupcakes from scratch once, never to be repeated. So I’m always on the lookout for something that will bring me as much happiness as my homemade batch did.

Cupcake challenger #1: Buttercake Bakery on Pico. I heard about them from reviews on Yelp and Chowhound when I was researching possible contenders for this test. Reviewers raved about how they kicked Sprinkles’ ass in both taste and price. At $2 a cupcake, these ended up being some of the cheapest of the bunch, alongside Hotcakes. 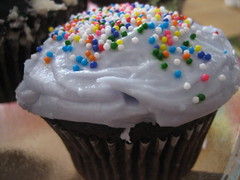 The small cupcake store is located on the north side of Pico near a newstand and down the street from John O’Groats. Inside it looked like a quaint little bakery. The pastry displays weren’t exactly impressive in a neat and orderly way but, like I said, this was quaint. On a Saturday (they’re closed on Sunday), I was the only person in the store so the woman behind the counter was extra helpful and friendly. Unfortunately the cupcake choices were very limited. Yes, they did have red velvet but nothing really exotic. Just chocolate and vanilla, and chocolate with coconut. So I just got the coconut cupcakes as my wild card flavor. The Buttercake cupcakes were among the smallest of the cupcakes but for $2 it wasn’t that bad.