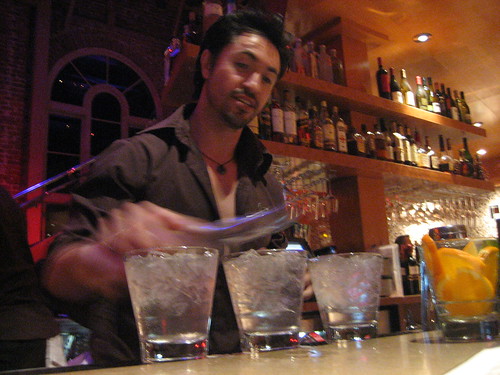 The other night I had the most delightful, unusual cocktail: Pearadis at Eleven. Eleven Nightclub and Restaurant recently opened up in boys’ town on Santa Monica Boulevard and their cocktail menu kicks the nearby Abbey’s ass with its variety and innovativeness. With offerings that incorporate unusual cocktail ingredients like Tang and pomegranate vodka, I want to bow down at the feet of this bar’s mixologist. At last something different other than overly sweet specialty cocktails. On our bartender LK’s enthusiastic recommendation we tried the Pearadis ($11), or as the bartenders have nicknamed it, the Pearis Hilton. 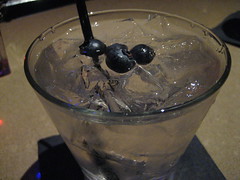 Surprisingly despite who it was named after it tasted really good and clean. With Absolut Pear, stirrings lavender and lemon-lime soda, it was quite refreshing and really pretty. Yes, if pretty had a taste, it would taste like this — spiked flower water. Presentation was simple, poured in a tumbler over ice and garnished with several blueberries. But its innocent appearance fools you as this drink is very strong.

Yes, although all the cocktails at Eleven are $11, I have to say that I’m willing to pay that price for the uniqueness of the concoctions. Plus they make ’em strong here so you get your money’s worth. Next time I’m going back for that NASA cocktail, which uses Tang. You heard me, Tang.